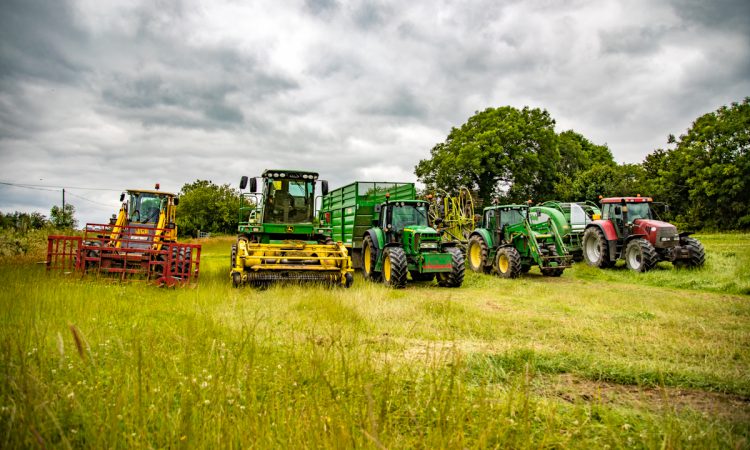 Ciaran Creane and his father Kevin run a busy tillage and contracting enterprise near Fethard-on-Sea, New Ross in Co. Wexford. The tillage enterprise stretches across 300ac, while the contracting activities account for the lion’s share of the work.

Speaking to AgriLand this week, Ciaran Creane gave us an insight into the contracting business, focusing on the machinery fleet in particular.

It makes sense to have tractors of the same make [brand]. If you are swapping implements like power harrows from one tractor to the next, it makes life easier when the tractors are the same; you don’t have to cut shafts, for example.

Our tractors have AutoQuad gearboxes – except the 6900, which has a PowrQuad box. They are easy to operate; anyone can get on and learn how to drive them.

They are also easy to get parts for.

We also have two Case IH tractors – a 2005 CVX1190 and a newer 2008 CVX195. We like those; the continuously variable transmission is ideal for working the Fusion but they are not tractors that anyone can jump on and drive.

We deal a lot with TFM in Enniscorthy for John Deere. The guys working there provide a good service; you can always get the parts you need. They’ll go out of their way to help you – even after-hours.

We also deal with Kellys of Borris for several brands, like Horsch, JCB and so on. Again, the service is very good.

We also work with several other dealers, including F Jenkinson in Carlow – for our Bateman self-propelled sprayer.

What is the best tractor you ever had?

That tractor ran two mowers – one on the front linkage, plus a rear unit – for a long time [up until two years ago]. It is very reliable. It hasn’t needed much – not even a head gasket.

Looking back further, the best tractor that we had years ago was a Fiat [Fiatagri] 110-90DT that my father bought. He got it as an ex-demo model – it had a ’91-KE reg. It was the first 4WD tractor he had. It must have done close to 30,000 hours; it did everything around the place, including pulling beet. I remember it being a nice tractor to drive; it had the flat back window – the SuperComfort cab.

What is the worst tractor you ever had?

That is probably our 6420S. It’s going well now, but it did cost quite a bit of money in previous years. For example, the hydraulic pump, rear differential and head gasket were problem areas. For a few years, it wasn’t reliable at all, but it’s sorted now.

The McHale Fusion; it’s a good machine. We have a Fusion 3 Plus, which we change every year. This is our third Fusion 3 Plus and our fourth Fusion overall.

The Fusion 3 Plus puts plastic [film] on the barrel of the bale, instead of net-wrap. Our customers like it; most wouldn’t want to go back to the old system.

We usually run it behind one of the Case IH CVX tractors. They run well together; the stepless transmission is very handy – it allows me to keep the engine revs steady all the time.

We draw in the wrapped bales with a Keltec ‘Bale Handler’. The Fusion and it should nearly be sold as a matching set; they work well as a pair. It means that three men can do a lot of work – one on the Fusion, one on the Keltec and another stacking back in the yard. Before, that job would need up to five people.

Being able to do the same work with less people is important at that time of year, especially when the silage harvester might be out that day.

A Claas Disco 8500 butterfly [triple] mower-conditioner, which we got this year. We run it on the 7530. It’s going well so far, but it does need plenty of power.

We also run a John Deere 530 10ft trailed mower-conditioner. Our’s has performed well; it runs on the 540rpm box. I’ve heard of some, being run on the 1,000rpm box, that have thrown up some problems in the past.

It depends on the tractor or machine. For example, we had an ’04-reg Valtra T130 – bought second-hand – that we ran up to 17,000 hours. We kept it that long because it wasn’t giving trouble.

2012 was the last time we bought a brand new tractor. I’m not saying we wouldn’t buy another new one, but it’s hard to afford it.

We do buy some of the machinery new; it depends on what it’s doing and how much work we have for it.

We buy parts from the local dealers and we also get some from JMC Parts in Cork.

This one was my own fault. Years ago, I was driving the combine – a Deutz-Fahr 4090 TopLiner. I was cutting on a hill and managed to plug up the whole machine. I got distracted so I kept on going, until a straw walker broke due to the strain.

Probably the MIG welder; there’s always a need for it – usually for sorting out points, tips or something else on a plough or a cultivator.

Any home modifications or changes to your set-up that stand out?

We fitted track eradicators to a [Cross] ring roller. It was a great machine, but its tines and paddles didn’t root up deep ruts. That’s why we opted to fit our own ‘optional extras’.

I like sowing barley with the Horsch Pronto 4 DC drill; it’s an enjoyable job when it’s going well and you feel like you’re getting through a lot of work.

Ploughing; we have two good ploughs – a 5-furrow Kverneland and a smaller 4-furrow hydraulic vari-width unit of the same make – but it doesn’t matter what you have.

It’s a slow job and you don’t feel like you’re getting through much work. You could go out in the morning with a new machine and, by that evening, you’d think it was worn out.

No; we have enough to do to keep what we have going.

What is your next planned purchase?

We hope to replace one of the tractors in the new year. We’re not sure what the replacement will be – maybe a John Deere or even a Claas. We’ll see when the time comes.

Insurance is a big concern for anyone involved in agricultural contracting. It’s expensive and it’s a worry.

Labour is also a big challenge; it’s hard to get enough people at certain times of the year – especially when, for example, you have to work late into a Saturday night.

I understand it from the operator’s point of view. If the weather was perfect we could do all of our pit silage in 10 long days, but where does an operator go when those 10 days are finished?

Also, you need a lot of machinery to do enough work to keep busy through the year. It’s always hard to get enough [money] for a contracting job to cover the amount that’s invested in machinery in the first place. 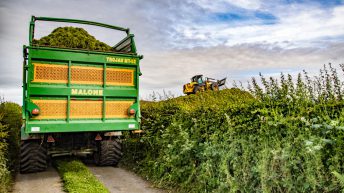