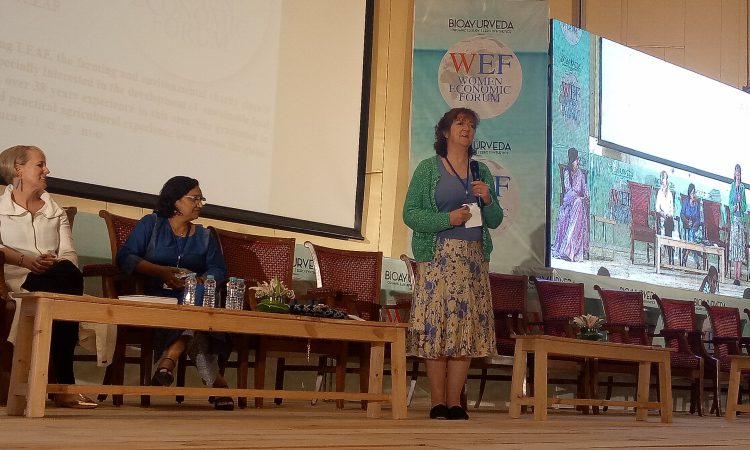 LEAF (Linking Environment And Farming) chief executive, Caroline Drummond, has been named one of the Women Economic Forum’s ‘Women of the Decade’.

The award recognises Drummond’s contribution towards sustainable farming, celebrating her achievements and leadership.

The annual forum, which is now in its 25th year, brings together pioneers in circular economy, agriculture, sustainable development, public policy, smart cities, conscious enterprises, data and tech, cybersecurity, among many other industries and sectors.

The theme of this year’s international event is ‘Reimagining Societies: Reclaiming Humanity with Gender Equality’.

LEAF chairman Philip Wynn said: “We are delighted to announce that Caroline Drummond, who has led LEAF since 1991, has been selected as a deserving recipient of the WEF Women of the Decade award for her work to develop and promote more sustainable farming.

“The award is a testament to her passion, hard work and dedication to global sustainability issues.”

Caroline Drummond added: “It is a great honour to receive this award. I am very humbled to be selected and grateful for the support of my colleagues over the years, with whom I would like to share this recognition.

As we strive to ensure the impact of our work is meaningful, such an award greatly raises LEAF’s profile in demonstrating what we do and what our farmers achieve.

“The global environmental challenges are massive, and this award recognises that the part LEAF plays is making a meaningful difference.”

Women of the Decade

Caroline Drummond has led LEAF since it was first set up in 1991. Her work focuses on encouraging more sustainable farming practices and building better public understanding of farming and the environment.

She is actively involved in many industry partnerships and initiatives.

In 2009, Drummond was awarded the Member of the British Empire (MBE) and has an Honorary Doctorate from Harper Adams University, as well as a Nuffield Scholarship studying ‘What can Farmers Learn from Science to Improve the Nutrition of our Food’.

She was also awarded Honorary Fellowship for the Society of the Environment, and in 2017, received the IAgrE Award for Outstanding Contribution to the Landbased Sector.

In 2018, she was awarded the RASE National Agriculture Award and an Honorary Fellowship from the Royal Agricultural University.

Drummond will join a plenary session during the event discussing ‘Leaders of the decade in thought leadership, innovation and sustainability’.