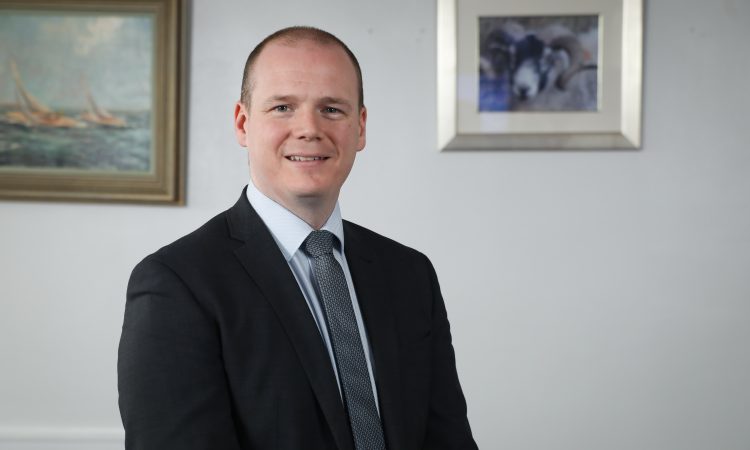 East Antrim MLA Gordon Lyons has taken charge of the Department of Agriculture, Environment and Rural Affairs portfolio as Edwin Poots steps down for health reasons.

But who is the up-and-coming DUP man and what will his priorities be during a critical time for NI farming?

Before his Assembly career, Lyons was a councillor representing the Coast Road area of Mid and East Antrim District Council.

The Coleraine man was then co-opted onto the Assembly to replace Sammy Wilson as East Antrim MLA after ‘double-jobbing’ was banned in 2015.

He was elected on his own ticket for the first time a year later in the 2016 Assembly Elections. He’s had a quick rise through the ranks of government and was appointed Junior Minister in Executive Office when the Assembly was restored in January 2020.

Now as the top man at DAERA, he will oversee the department’s 3,040 employees and be responsible for its annual budget of around £484 million.

Over the last few days, the new Minister has made his views clear on the Northern Ireland Protocol, encouraging the public to sign a DUP petition calling for the Prime Minister to trigger Article 16.

However, perhaps concerningly, there was little mention of core farming issues as the new minister outlined his priorities.

Minister Lyons said: “I am keen to quickly get to grips with the issues facing the department and industry, not least the implications of EU Exit and the impacts of the Northern Ireland Protocol (NIP).

“As Minister, I will consider all options and pursue all avenues to mitigate against the societal and economic consequences of the NIP and the barriers it is causing to trade.

“I also want to put on record that I totally condemn any threats made against workers and staff going about their duties at Belfast, Warrenpoint and Larne ports.

“As public servants, these staff should be allowed to do their jobs without fear and it is unacceptable and intolerable that threats have been made. There is no place in society for intimidation and threats against anyone going to their place of work. Staff safety is of paramount importance.”

Commenting about the issues around Covid-19, the minister said: “I am acutely aware of the devastating impact that Covid-19 has had on the agri-food, fisheries, rural and environmental sectors and I intend to focus on assisting those sectors to recover and remain sustainable in the long term.

I would also like to pay tribute in particular to the agri-food sector and the role they have played throughout this crisis and keeping food moving – the sector is vital to our economy and we must continue to support it.

“DAERA is a diverse and wide-reaching department which impacts on all our lives – whether it is the food we eat, the air we breathe, the beautiful countryside we enjoy, our climate or our rural communities.

“Much good work is already in progress on many important issues including the multi-decade Green Growth Strategy, the Forests for our Future programme and delivering and simplifying support schemes for our farm businesses.

“The department is also currently consulting on a number of significant areas including a Climate Change Bill; a clean air strategy; the governance elements of the Environment Bill; access to our natural environment for outdoor recreation, and further education support at CAFRE.

“I encourage everyone to respond to these discussion documents and let us know what you think. I wish to continue Edwin’s good work in these areas, keeping these important issues moving for him to pick up once he is back in office.”

Lyons added that he wished his colleague Edwin Poots a full and speedy recovery.

“While I would wish for better circumstances, it is a privilege to take up this role whilst he recovers from surgery and I look forward to working with the industry, stakeholders and the wider rural community in the weeks ahead,” he said.