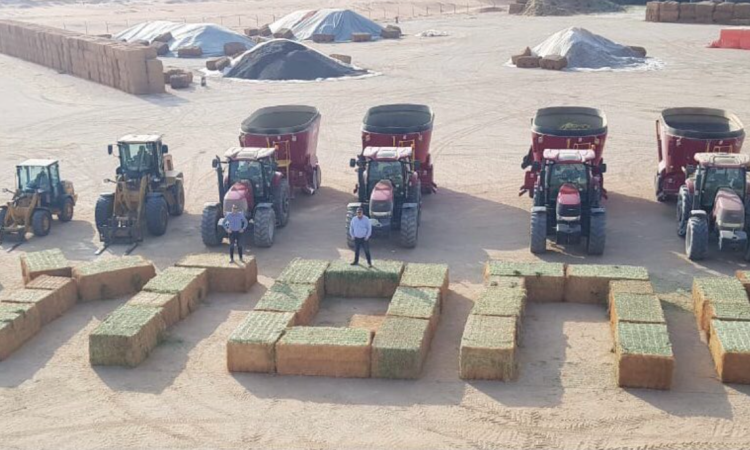 Two Irish farmworkers based on a dairy farm in the middle of the United Arab Emirates desert celebrated Tyrone’s All-Ireland victory in true agri style.

Patrick O’Dubhair and Paul McElroy posed with alfalfa bales spelling out the team name to cheer on the O’Neill County.

McElroy, who is originally from Eglish, Co. Tyrone, said he had been out in the UAE for six years working on a large dairy farm.

We decided Patrick would support Tyrone too, as although he is from Carlow, he is longitudinally closer to Tyrone than Mayo,” he said.

The pair were able to watch the match as it happened through an online subscription service.

The UAE is three hours ahead of Ireland so kick-off was at 8:00pm, but there were no celebratory beers afterwards as both had early starts in the morning.

“We thought it would get a good laugh and wanted to show our support for the team,” McElroy said. “I always knew Tyrone was going to win.”

Farming in the UAE

While Saudi Arabia tends to be more popular with agricultural migrant workers from Ireland, the UAE still attracts a considerable number of young farmers.

With around 100 Irish citizens living in the community, the city even has its own Gaelic Games club, Al Ain GAA.

McElroy said he would encourage any young farmers looking for a challenge to think about working overseas.

“I have been out here for six years now and I haven’t regretted a minute of it,” he said.

I would highly recommend working in the UAE to anyone at home – especially if you are limited in terms of land and want to try something a bit different.

“It’s 54o here, so that comes with its own challenges, but most of our work would be in the shade so we are very rarely working in direct sunlight.”