Home » N.Ireland » 2 arrests made as part of rural crime clampdown in Down

2 arrests made as part of rural crime clampdown in Down 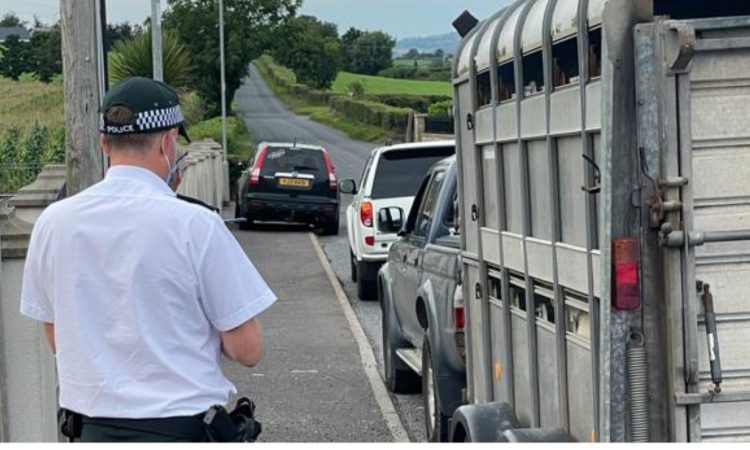 Two arrests were made for criminal offences during vehicle checkpoints conducted as part of an operation targeting rural crime in Co. Down last week.

The joint operation was conducted by members of the Police Service of Northern Ireland (PSNI) and Northern Ireland’s Department of Agriculture in Banbridge and Dromore in Co. Down.

Commenting on the operation last Wednesday (August 11), PSNI officers based in the Armagh, Banbridge and Craigavon division said:

“Last night Banbridge Neighbourhood Team with Enforcement Officers from the Department of Agriculture, Environment and Rural Affairs (DAERA) conducted a joint operation targeting rural crime in Banbridge and Dromore. You may have seen us conducting vehicle checkpoints in your area.

The results of the operation was eight vehicles with cattle were inspected by DAERA enforcement officers and police dealt with four persons for no insurance, five persons were searched, two arrests were made for criminal offences.

“If you see anything suspicious or have any information about rural crime please contact your Local Neighbourhood Team on 101 or Crimestoppers on: 0800-555-111,” the police post concluded.

In other rural crime related news, the cost of rural theft in Northern Ireland is reported to have fallen substantially over the last year during the pandemic.

However, farmers have been warned not to be complacent as thieves are expected to return with new tactics.

Last month, police warned of a “slight increase” in shed and outhouse break-ins in Antrim.

According to figures released earlier this month on Tuesday (August 3) by rural insurer National Farmers’ Union (NFU) Mutual, rural theft costs in the region fell nearly 37% to an estimated £2.1 million in 2020.

Agricultural vehicles, tools and livestock were among the items most likely to disappear from farms in Northern Ireland.