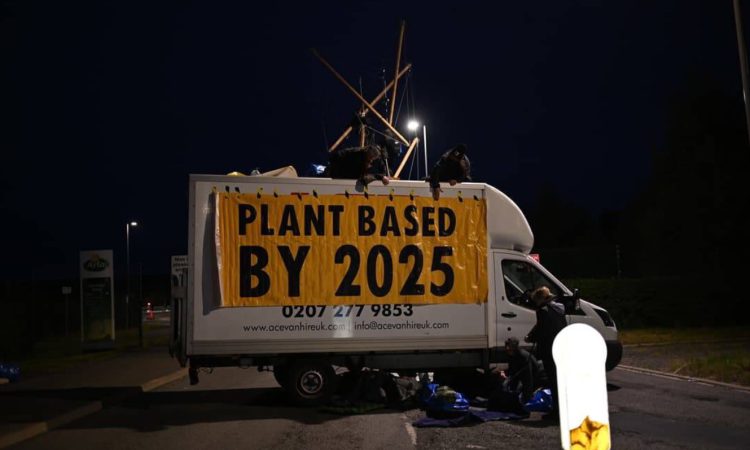 A group of animal welfare activists has blockaded an Arla Foods dairy distribution centre in the UK in an overnight demonstration.

The group, called “Animal Rebellion”, claimed that 50 of its activists blockaded the UK’s largest dairy factory, in Aylesbury, at Aston Clinton, England, in the early hours of this morning (Tuesday, August 31).

30 of the activists are “locked onto bamboo structures and concrete barricades”, the organisation said in a statement today.

UK police are on the scene and a number of protesters had been taken away at the time of writing.

Protestors have stated they plan to continue blockading the factory until Arla makes a commitment to “end dairy production and fund a just transition for its workers”.

James Ozden, a spokesperson for Animal Rebellion, said about the blockade: “The recent IPCC report issued a code red warning on the impacts of the climate crisis. It spoke of a need for urgent action from our government to address carbon emissions, including methane which is in large part a byproduct of animal farming.”

“The dairy industry abuses animals, the planet and workers, who are increasingly squeezed by big business,” the protester alleged.

“We’re not just demanding that Arla go plant-based by 2025, we’re demanding that the government supports companies like Arla by funding a just transition for workers in meat and dairy industries to just and sustainable alternatives,” the spokesperson claimed.