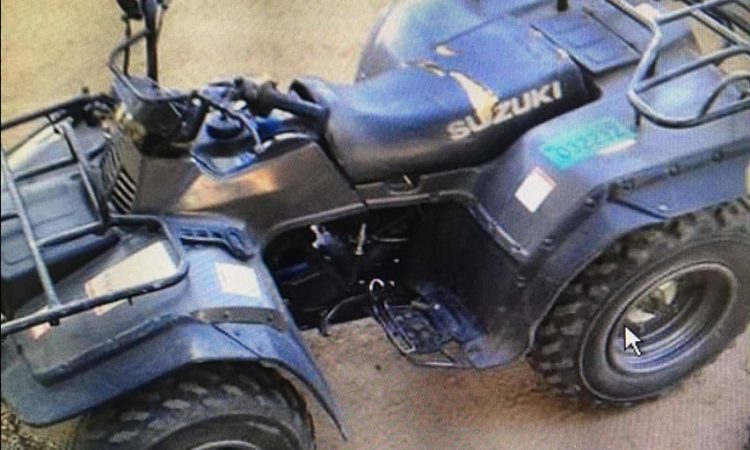 Police have put forth an appeal for information in relation to a quad stolen with a number of other items earlier this month.

Issuing the appeal, members from Foyle branch of the Police Service of Northern Ireland (PSNI) also provided a photograph of the stolen vehicle, a dark-coloured Suzuki all-terrain vehicle (ATV), taken from a premises in Co. Derry.

The PSNI officers put out a statement on Saturday, May 25, saying: “Have you seen a quad like this? Is it for joy riding or being sold online?

“It was stolen along with tools and other items at a property outside Eglinton,” the statement said, in an appeal to the public for assistance in fighting rural crime.

“Constable Daniel Crowe from Strand Road requests that anyone with information contact police on 101 quoting reference 423 of 08/05/19,” the statement concluded.

Man airlifted to hospital in Armagh

Meanwhile, news emerged earlier today that emergency ambulance crews in Northern Ireland responded to a call at a farm in south Armagh on Friday afternoon, May 24.

It is understood by local publication, Armagh I, that a man in his 60s was overcome with slurry fumes and an ambulance arrived at the scene on the evening of the incident shortly before 6:00pm.

It was also reported that the accident occurred on the Tullyherron Road area, between Whitecross and Glenanne, around 5:00pm.

The air ambulance attended the scene and the cause of the incident remains unknown at this stage but Armagh I has reported that the injured man is now recovering.