Home » Machinery » If the season’s so busy why not live in your silage wagon?

If the season’s so busy why not live in your silage wagon? 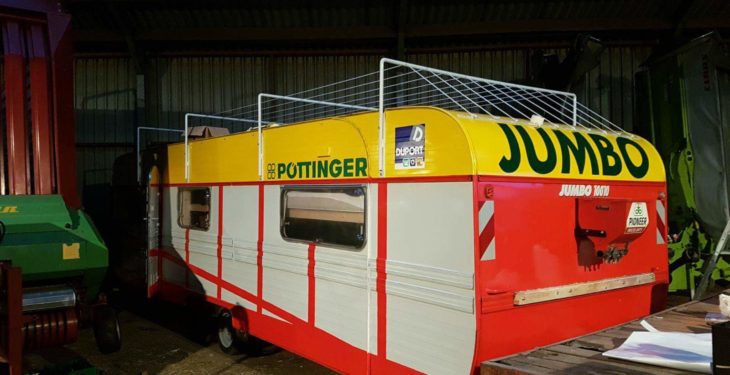 This (Pottinger) silage wagon themed caravan was spotted by an AgriLand reader recently; one wonders if some farmers, contractors or members of the machinery trade can become too enthused by their equipment of choice.

The mobile living quarters were spotted on Facebook; clearly belonging to a Pottinger fanatic – whether a dealer or an end-user.

On the subject of wagons, the Austrian firm currently has a triple-axle unit on demonstration here – its largest unit to date on Irish soil. It is a Jumbo 7210 Combiline. This machine is over 10m long but, importantly, under 3m wide (2.97m).

Its rated (DIN) volume is over 40m³. Its chopper unit (knife-bank) can accommodate 45 knives. Theoretical chop length is down to 34mm. Empty, depending on specification, the wagon weighs 10.5-11t.

It also runs on a tridem axle configuration, with ‘forced (active) steering’. A hydro-pneumatic suspension system keeps everything running reasonably smoothly – at speeds of up to 60kph. It is typically kitted out with 710/45R22.5 tyres.

In any case, check back for further coverage of the ‘demonstrator’ Jumbo 7210 Combiline here in Ireland – over the coming weeks.

Huge fleet of wagons on one farm

There is an increasing number of Jumbo Combiline wagons here in Ireland. In continental Europe, there are farmers and contractors that run large fleets of these machines. For example, in Luxembourg, Reiff Josy & Son run no fewer than seven such machines.

The contracting company has 450ha of its own land. Alongside arable (370ha) and vegetables (30ha), Josy and Jeff Reiff – the company’s managers – also focus on their 75-cow dairy farm and breeding operation. That includes managing 50ha of grassland.

Meanwhile, back here in Ireland, Pottinger is making some changes to its dealer network. Pottinger is apparently planning to part company with Tipperary-based Suirway Farm Machinery.

It is understood that the planned split is not necessarily “amicable”. Pottinger has made no comment on the situation. 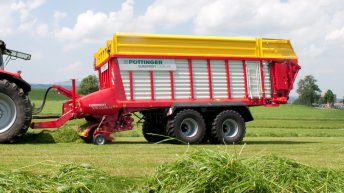 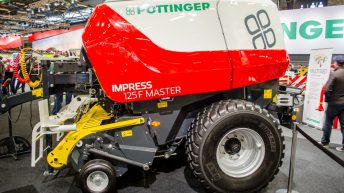