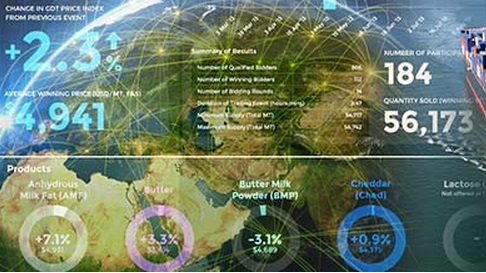 The event represents the third positive auction for prices in a row after prices rose last month for the first time since March 2015 after 10 negative auctions.

Average prices paid at the latest Global Dairy Trade auction rose 16.5% on the last event held two weeks previously which itself was up 10.9%

Fonterra is significantly reducing its GlobalDairyTrade (GDT) offer quantity forecasts for the next 12 months.

Since its inception in 2008 Fonterra has traditionally been the biggest volume seller on the platform and today’s announcement will see the volumes it offers reduce by a third.

In a statement, the world’s largest co-operative has said the forecasted offer volumes over the next 12 months for New Zealand products have been decreased by 56,045 metric tonnes. A 62,930 metric tonne decrease is forecast over the next three months and 6,885 metric tonnes of planned volumes being added back later in the year in anticipation of changing market conditions.

Kerry Group has confirmed that it is holding its August milk price – at 26c/L including VAT.

A spokesperson for the group said that despite the continuing lack of improvement in global dairy market conditions, it would hold its price to farmers for August.

It comes after Lakeland Dairies cut its August milk price.

Lakeland Dairies cut its August milk price by 0.75c/L to 26.25c/L after the co-ops board met last week.

This latest cut follows a cut of 1c/L for July milk and another 0.75c/L cut for June milk.

Lakeland is the first co-op to announce an August price for milk and it comes after most processors cut their July milk price.

According to the latest figures from the Milk Market Observatory (MMO), milk prices are set to fall again for August returns.

The average farmgate milk price across the EU has fallen over 20% in the last 12 months and the latest MMO statistics suggest that it will fall a further 1.3% for August supplies.