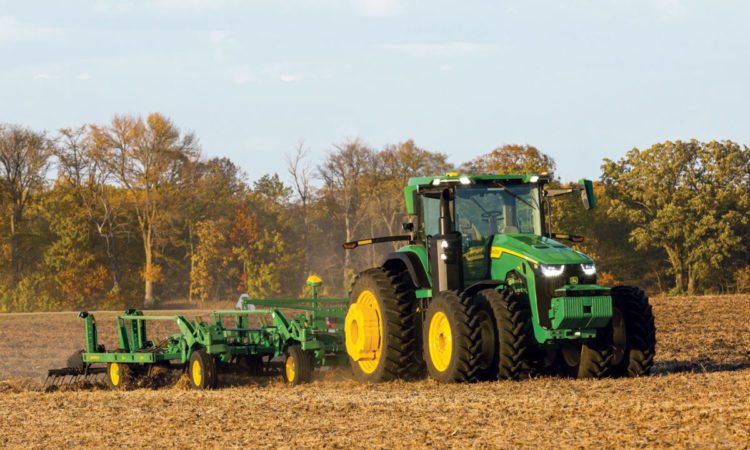 In a press conference that was as replete with symbolism and cliches as it was hard facts, John Deere made the long-awaited announcement of an autonomous tractor that will be available for farmers to buy this year. The press conference was held, not in the company’s home ground of Illinois in the U.S, but way out west in Las Vegas at a show that is billed as “the most influential tech event in the world”. The CES (Consumer Technology Association) show is aimed primarily at consumer electronics and the John Deere presentation was also aimed at those who may not be familiar with farming.

However, the importance of what it had to say should not be diminished simply because John Deere did not say it directly to its customer base.

The take-away message was that rather than just talk about autonomy in the field and demonstrate prototype robots trundling around crops, the company is bringing a fully fledged autonomous tractor to market this year. No details of the the tractor itself were given although the machine shown on the videos was an 8R 410, which is the largest of the company’s conventional tractors.

It was shown working with a ‘TruSet’-enabled chisel plough and it was the combination of the two that was being marketed to the public as a complete cultivation machine instead of a tractor, plus implement.

Rather that dwell on the performance parameters, it was the concept of being able to set the tractor going in the field and then leave it to its own devices while catching up with the paperwork or having dinner with the family, which was emphasised.

Advertisement
There is nothing new in all of this, except that U.S farmers can now actually buy it, ready to go, straight from the box.

Safety of autonomous machines is key

The major issue with any autonomous system is that of safety and here John Deere claims to have designed the system with safe and secure operation being the core consideration. The company also makes a clear distinction between what is possible in the way of automation in the field, and that which is possible on the road, noting that the farmer has to drive the tractor to the field manually before leaving it off on its own. By not having to worry too much about extraneous matters such as traffic lights or pedestrians, engineers could focus on having the tractor work efficiently in the field. GPS obviously plays a pivotal role in the guidance of the machine, with the ability to manage headland turns and implement settings being almost old hat by now.

A tractor with vision

What has enabled completely autonomous operation is the bringing of perception to the tractor, both of its immediate and more distant environments. This has been achieved though the use of six ‘stereo’ cameras that each produce three images. The actual view or raw image, a depth map and per pixel classification. The latter being the ability to distinguish between land, sky and trees at the level of each individual pixel. A fourth image is then generated within the software which assigns a confidence value to the pixel classification, before all four are combined to create an awareness of the surroundings by which the machine can make decisions on navigation.

There is a strong element of machine learning in all of this. So far, at least 50 million images having been used to instruct the software on how it should react to situations with more being added all the time. Should any anomaly be detected, an event or obstruction which is not recognised, then the tractor just stops and alerts the farmer via mobile phone or other device. The farmer can then return to the tractor or set it going again remotely, if deemed safe to do so, having viewed the obstruction via live link from the cameras.

The complexities of configuration

On the surface, the operation of the tractor appears simple enough but the nitty gritty has yet to be explored. How, for instance, does the farmer configure the tractor and upon what information does he/she do so? This question does lead to a further advantage of autonomous tractors and that is that eventually they will become more capable of configuring themselves as the feedback from data collected over previous seasons is applied to current operations.

With this launch of an autonomous tractor John Deere is taking us into new territory. 100 years ago the horse was replaced by the tractor and now we are seeing the start of the driver being replaced by the computer.

Many other companies are pursuing the use of autonomy to ease the load on farmers and help them farm more efficiently, just as Deere, justifiably, claims to do. However, the point was made that it is a matter of trust. Farmers are being asked to place their faith in the hands of the system’s engineers as never before. Once this Rubicon has been crossed, it is but a short step to handing over the entire running of a holding to a tractor manufacturer.

The dawn of true autonomy

These are early days for autonomy on farms and John Deere is putting its weight firmly behind digital technology in a bid to move its business forward, most probably into areas that were once quite separate from bolting together machines. Is it possible that actually making tractors becomes a secondary business to managing vast swathes of land throughout the world? That is one clearly discernable path into the future, but it will not be the only one, and the reaction of other manufactures to this latest development will clear the mist a little from within the crystal ball. The expected price of the autonomous tractor was not mentioned, nor was the likelihood of it appearing in Europe where legislation may offer greater hurdles to its adoption.
Download Our Free App
Autonomous tractor GPS John Deere Machine learning Machinery
Loading Next Story