Amazone is probably best known here for its disc-type cultivators, power harrows, drills and mounted/trailed sprayers; however, one of the German company’s flagship products is its Pantera sprayer – the only self-propelled machine in its current arsenal (apart from small, municipal-spec lawnmowers).

Farmhand has not divulged where this Irish-owned Pantera now resides; nor which dealer retailed it. The machine is, nonetheless, here – and here to stay.

There is already believed to be an existing Pantera in Tullow, Co. Carlow.

Whether further Amazone-badged machines of this size will follow remains to be seen; the market for new self-propelled sprayers (across all brands) here in Ireland is somewhat limited.

Thanks to a choice of chassis types – Pantera, Pantera-W and Pantera-H – the machines can be configured to suit different types of buyers and, consequently, different farming and contracting operations.

In other related news, the Amazone Group reports that it grew last year (2017). Its (consolidated) total turnover went up to €457 million.

Turnover in tillage and crop protection equipment developed “above average”.

Amazone exports about 80% of its total production; significant turnover increases were recorded in Poland, Romania, Ukraine, Kazakhstan, South Africa and Belarus. “Positive growth” was seen in its home market (Germany) and also in Austria.

2017 sales in France, while weaker, turned out better than had originally been anticipated.

In total, around 1,850 people were employed by Amazone (including 130 apprentices) last year. Over 7% of turnover was ploughed back – no pun intended – in to R&D (Research & Development).

Directors Christian Dreyer and Dr. Justus Dreyer (below) say the company is on a “stable, successful course”.

Christian explained: “The excellent result for 2017 shows that our innovations – along with continuing, strengthened engagement in many of our markets – are bearing fruit.”

Back in 2016, in Mosonmagyarovar in Hungary, Amazone bought the plough manufacturing business from Vogel & Noot; production of Amazone’s Cayros ploughs has continued to grow in the meantime.

This year, for example, a further €1 million is being invested in a new machine shop in the plough production facility. 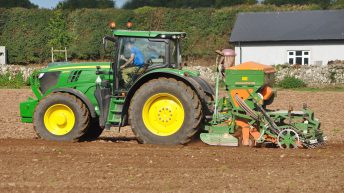