Keeping to a maximum speed of 10km/hr and maintaining a boom height of 50cm to 75cm when spraying crops was the take home advice given by agriculture agronomist David Felce, at this week’s Ulster Arable Conference.

Speeding up beyond 12km/hour can lead to a significant reduction in efficiency when it comes to the actual utilisation of the spray applied and the proportion of the crop cover actually achieved, he said.

Felce admitted that, in theory, different nozzle types are required depending on the growth stage of the crop being sprayed.

“The ear of a cereal crop has an entirely different structure to that of a plant leaf.

“Spraying at ear emergence stage is particularly important in Ireland, given the damp climatic conditions that prevail in this country and the fact that cereal crops are particularly prone to fungal attack in the run up to harvest.

“So it’s important to get spray deposited right around the ear. The same principle also holds when it comes to spraying the second full leaf in cereal crops. This is the part of the plant that accounts for 20% of the final yield secured.”

Felce suggested that the closest approximation to a one-stop shop spraying approach for cereals would be the use of an O3 flat fan nozzle, assuming an application rate of 100L/ha.

If higher application rates are required, for example 150L/ha, then a Red 04 flat fan configuration is the best nozzle option to use.

“As a result, the spray is better delivered to the intended target. Droplet size is also a key factor when assessing the potential effectiveness of a spraying operation. The smaller the droplets, the more prone the spray is to drift.

“But if droplet size is halved the number of spray particles that can be produced increases by a factor of eight. So it’s a question of balance, where this matter is concerned.  Boom height is the biggest variable factor when it comes to determining the efficiency of any crop spraying operation.

“Many farmers and contractors believe that wind speed will have the biggest impact on the efficiency of a spraying operation. But this is not the case.” 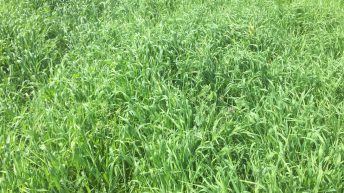