Home » N.Ireland » First Minister writes to all 650 MPs ahead of NI Protocol debate 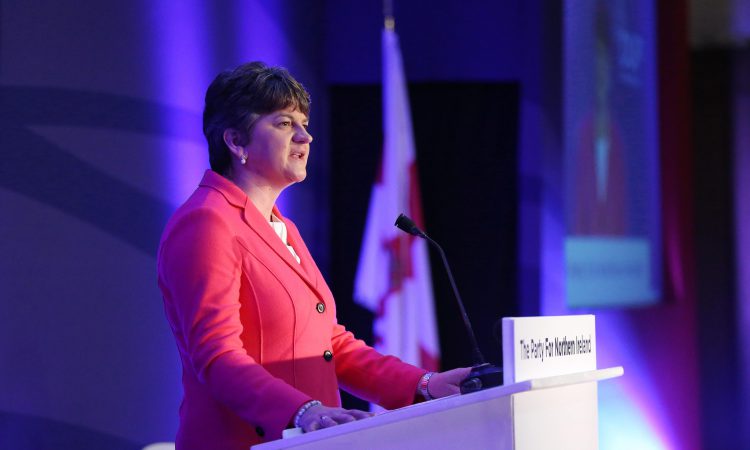 Northern Ireland First Minister Arlene Foster has written to all 650 MPs ahead of a debate triggered by a petition her party ran calling for the government to trigger Article 16.

All petitions which reach more than 100,000 signatures are considered for discussion in the UK Parliament. As a result, a debate has been scheduled to take place on February 22.

The party’s petition calls for the UK Government to “immediately remove any impediment or barrier” to
unfettered trade within the United Kingdom.

“After just one month, Northern Ireland is suffering real economic and societal difficulties as a consequence of the Northern Ireland Protocol operating and creating new barriers to unfettered trade within the United Kingdom and disrupting supply lines of goods to Northern Ireland.

“The government should use all the powers it has to move urgently to protect UK trade and to ensure all UK goods and produce can freely flow to and from every part of the United Kingdom,” it read.

The five-page letter to MPs called on politicians to familiarise themselves with the impact the protocol has had on Northern Ireland.

It also called on MPs to “press the government to be bold” to take action to underpin Northern Ireland’s full place in the UK “before irreversible societal, environmental and economic harm is done”.

“We have indicated to the Government that both the actions of the EU and the damage being inflicted on our East-West links within the United Kingdom cannot be sustained if Northern Ireland’s political and economic links to the rest of the United Kingdom are to be maintained and respected in all their parts,” it read.

The UK Government has an obligation to defend Northern Ireland’s place within the UK internal market, which is already being severely undermined by the growing barriers and impediments to trade in the Irish Sea.

“The Prime Minister has indicated to the House on several occasions that he is prepared to use all the instruments at his disposal to deliver truly unfettered trade between Great Britain and Northern Ireland.

“In our view, the long-term answer to the problems of the protocol is to be found through its replacement.”