Limousins topped at 6,800gns in Dungannon

Buyers travelled from far and wide to choose the animal that caught their eye from the first British Limousin Cattle Society (BLSC) sale of the spring.

The sale was held at Dungannon Farmers' Market on Monday (February 15) with 32 bulls and 14 heifers being brought forward for auction.

Bulls averaged £3,570 on the day, which witnessed an increase of £837 in comparison to last year's average. The sale saw nine bulls exceeding the 4,000gns mark.

Speaking about the proceedings of the sale, the Northern Irish Council representative, David Hamill, commented:

“I was delighted to see such a successful sale, with a great atmosphere, despite the Covid-19 restrictions.

"It was promising to see things heading back to normality. It was great to see buyers putting their confidence in the Limousin genetics.

"Appreciation must go to the auctioneers for all their hard work and the vendors for supporting the BLCS sale.”

Topping the trade at 6,800gns was Bernish Pirlo (pictured above) bred by Kieran McCrory, Co. Tyrone. This May 2019-born bull is a son of Wilodge Cerberus out of dam Bernish Julifortune - who is an Ampertaine Elgin daughter. Pirlo boasts two sets of the F94L myostatin gene.

Pirlo caught the eye of his purchaser during the viewing slot prior to the sale and was tapped down to a farmer from Annaghmore, Co. Armagh.

The 21-month-old Ballyrobin Poser claimed the second-highest price of 4,700gns. Exhibited by Joan Gilliland from Co. Antrim, Poser has a myostatin of F94L and Q204X.

Poser is sired by Ampertaine Elgin and out of a Wilodge Vantastic daughter. His dam, Frenchy, has bred bulls to the value of 20,000gns. He secured a new home on a local farm in Dungannon, Co. Tyrone. 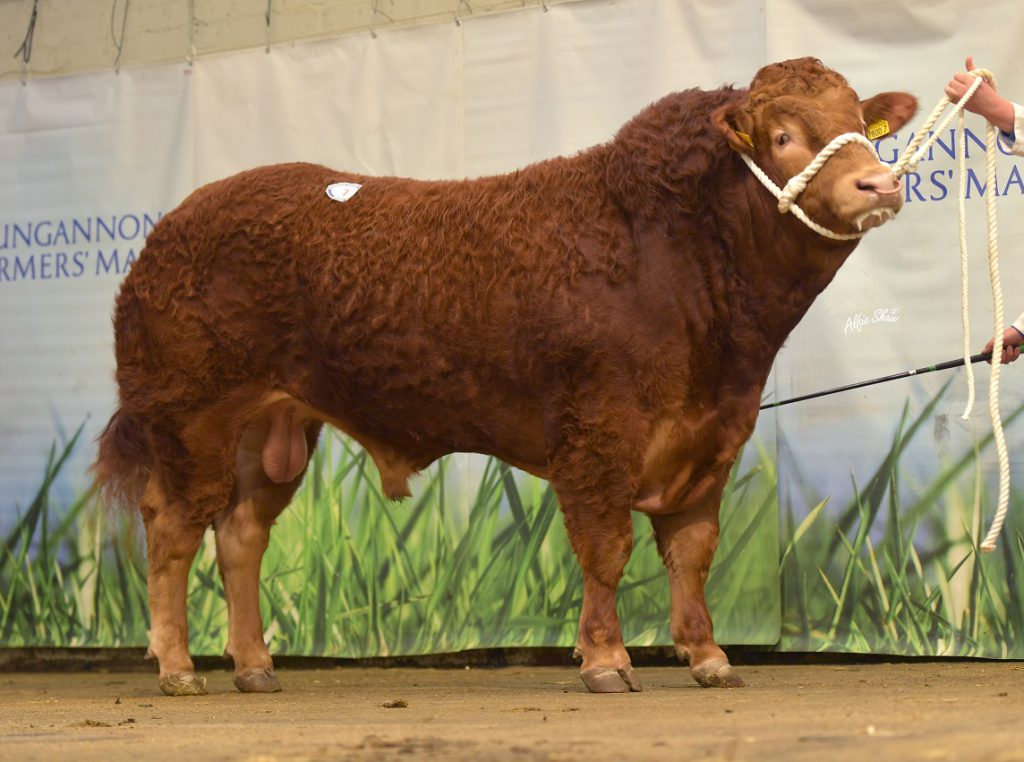 Next up was Deerpark Poseidon, who fetched a price of 4,200gns. Bred by C & R Mullholland, Poseidon is a maternal grandson of Ampertaine Elgin and is sire by Ampertaine Abracadabra.

This July 2019-born bull displays two sets of the F94L myostatin gene and was purchased by a Ballymena-based farm in Co. Antrim. 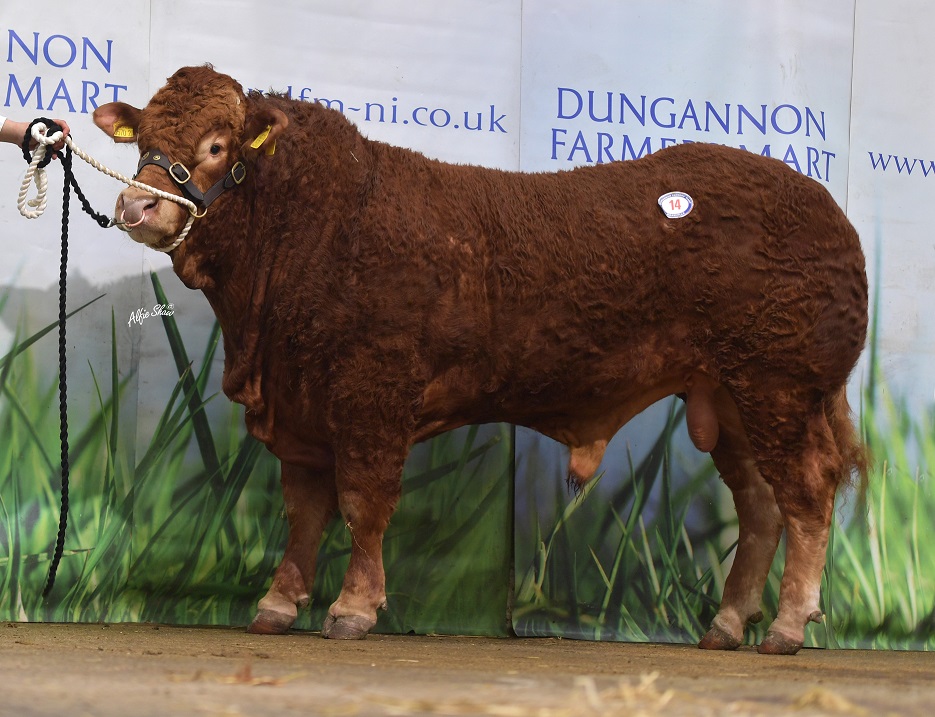 Displaying two sets of the F94L myostatin gene, Power was picked up by farmer from Newry, Co. Down.

The third bull to make 4,200gns was the October 2019-born Rathkeeland PeakyBlinders, presented by the Crawford Brothers.

This lad displays two sets of the F94L myostatin gene. He is sired by Powerful Irish and out of Curraghree Beyonce, a Grahams Samson daughter. Peakyblinder went now calls Co. Tyrone home in the locality of Dungannon.

Being exhibited by K and S Williamson, he displayed a myostatin of F94L and NT821. Phantommenace was purchased by a breeder from Maghera, Co. Derry.

The second bull to make 4,100gns was October 2019-born Carnew Prospect, presented by J & J Aiken of the Carnew herd. This bull also has myostatin of F94L and NT821.

Prospect is by the homebred bull, Carnew Lionheart and out of a homebred dam Carnew Holly, who goes back to Bahut.

Leading the way in the female section at 5,600gns was Rathkeeland Phillipa, exhibited by the Crawford Brothers, Maguiresbridge. This in-calf heifer is sired by the renowned Sauvignon and out of Maybouy Madonna - a Gleneagle Idol daughter. Described by her breeder as an “exceptional big, square show heifer with great plates”.

Phillipa is in-calf to Haltcliffe Nijinsky. This promising heifer sold to P Stewart, Garvagh of the Culnaman herd. 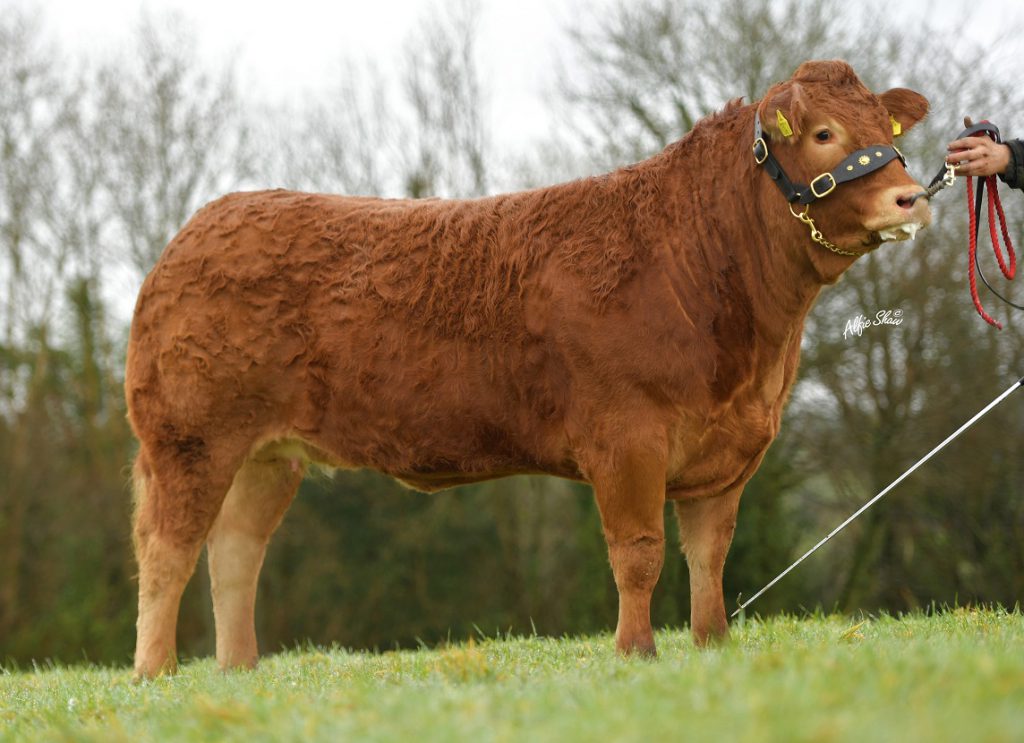 Johnstown Rosie, the youngest female in the sale, exhibited by Christopher Johnston.

This April-2020 born heifer, sired by Ampertaine Magnum, with Rocky being her maternal grandsire. Rosie boasts myostatin of F94L and NT821 and now calls Kilkeel in Co. Down home. 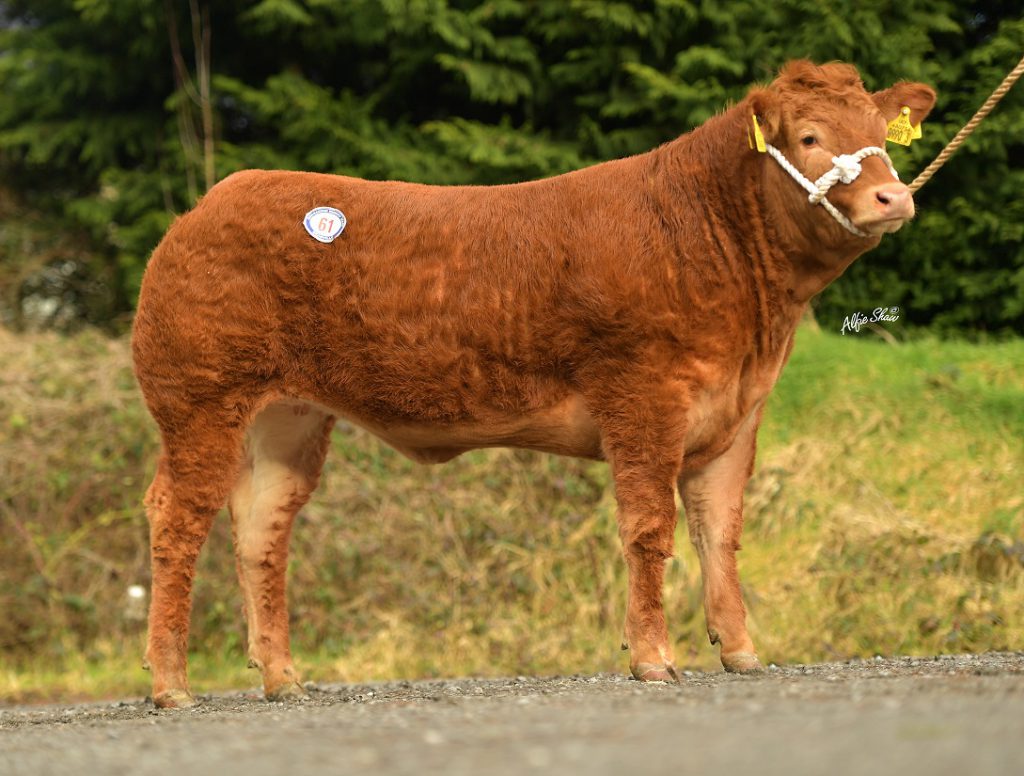 Next up was , selling for 3,000gns. Presented by J & J Aiken, this 13-month-old heifer sold to G McCague, Newry, Co. Down of the Bridgeview herd.

Robyn is sired by Ampertaine Commander and out of Carnew Melody, a Wilodge Goldcard daughter. 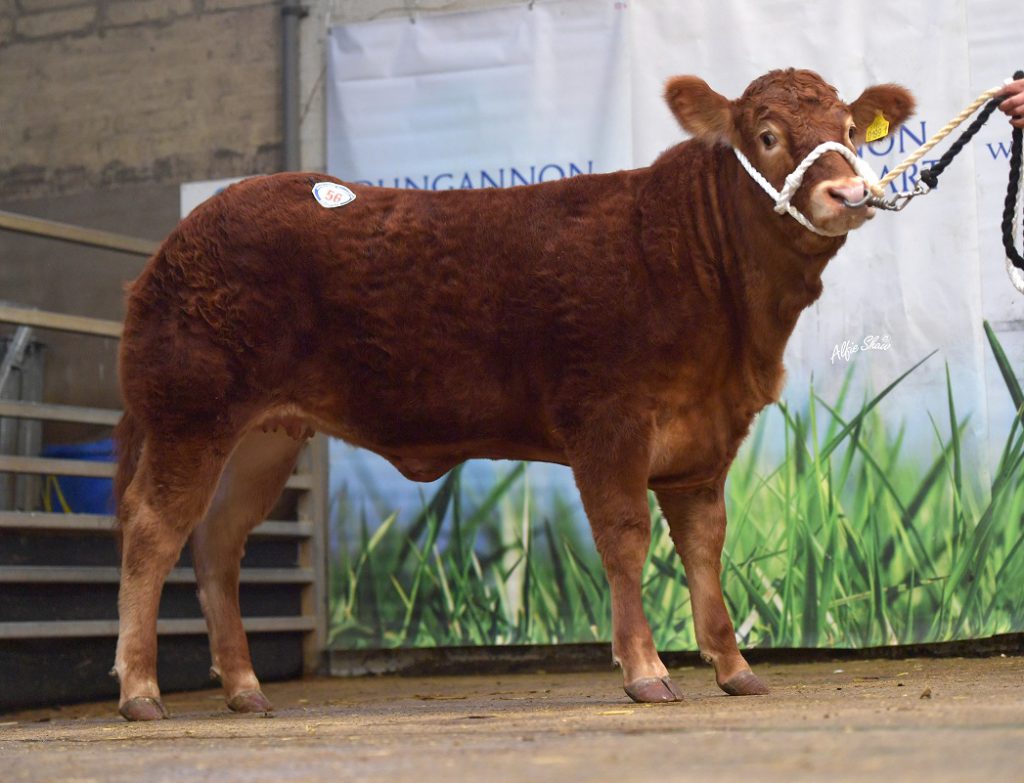