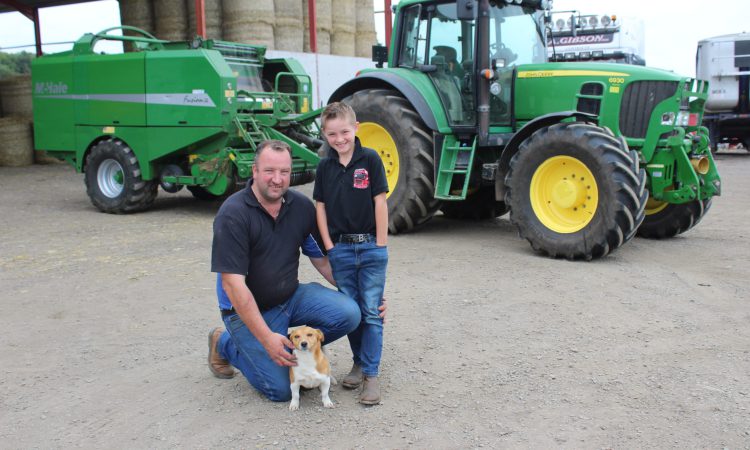 Increasing numbers of dairy farmers in Northern Ireland seem committed to growing their own acreages of wheat and barley.

But according to Co. Down contractor Andrew Gibson, it’s not the grain value of the cereal that is driving this growth, but rather its straw value.

“It can be used for both feeding and bedding. Given the calls that I have been receiving over the past few days, a significant number of dairy farmers are looking to put crop in for the first time over the coming weeks.

This is an approach which they feel makes their businesses more resilient.

“And this trend may well have a positive impact on the area of cereals grown across Northern Ireland during the period ahead.”

Andrew has an extensive client base centred around the towns of Hillsborough and Moira in north Co. Down.

He added: “The availability of a subsidy on protein crops has encouraged the growing of spring beans and this momentum may well be continued into 2022.

Beans are an excellent break crop, prior to a first wheat. The bean harvest got underway last week. It only takes five minutes to switch the settings on the combine to suit beans.

“By placing the straw chopper on the back of the combine, it means that the residue can be easily incorporated into the soil.”

The cereal harvest will be wrapped up in Northern Ireland over the coming days.

“There’s still a bit of spring barley to be cut over the next few days. But it shouldn’t take too long to finish,” Andrew continued.

“All crops have yielded well. Winter barley and wheat crops averaged well over 3t/ac, with spring barley coming in slightly below this figure. Drying cows have been minimal.

Straw yields are excellent and quality is equally good.”

The coming weeks will see Andrew out establishing winter barley and wheat crops for the season ahead.

When asked to assess the benefits of min-till as a crop establishment technique, he gave a very straightforward answer:

For me, it’s the plough every time. Ploughing is the most effective way of correcting problems that may have been an issue during the previous growing season.

“It is also extremely effective when it comes to opening up the soil and giving plant roots and opportunity to grow and develop.

“A good root system is the basis for all successful cropping operations,” he concluded.