Fliegl is now bringing its novel Buffel (or Buffalo) to international shows and trade fairs.

Now the machine is starting to pop up in Fliegl’s export markets. This month (January), for example, has seen it make an appearance at Polagra Premiery – a major Polish exhibtion. The picture (above) shows the eye-catching machine on the company’s stand in the run-up to the event.

Is it just a matter of time before we see an example put through its paces here in Ireland?

The company says that “pilot production” will start this year; the machine will be available to buy in 2019.

The machine encompasses a pick-up reel, a chopping rotor (similar to that in a silage wagon or a round baler), a bunker and an unloading conveyer.

In other words, it is essentially a self-loading silage wagon that can unload on-the-move – enabling it to keep picking up grass whilst unloading.

The idea is that the machine can continuously pick up swaths of grass – unloading (on-the-move) as and when tractors and trailers come back from the pit.

Upon each empty trailer’s return, it simply runs alongside the Buffel – in much the same way as a trailer would ‘side-fill’ from a self-propelled (precision-chop) harvester.

However, in the case of the Buffel, grass is unloaded via a conveyor system (rather than being blown by an accelerator through a chute).

Fliegl is rather excited about the machine’s prospects. It describes the Buffel as a “revolution” in the harvesting of grass and other swath-based crops. 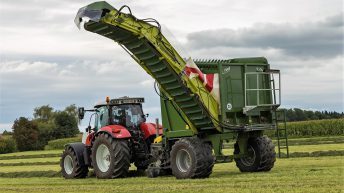