NI potato harvest: Unfinished business as up to 10% remains underground 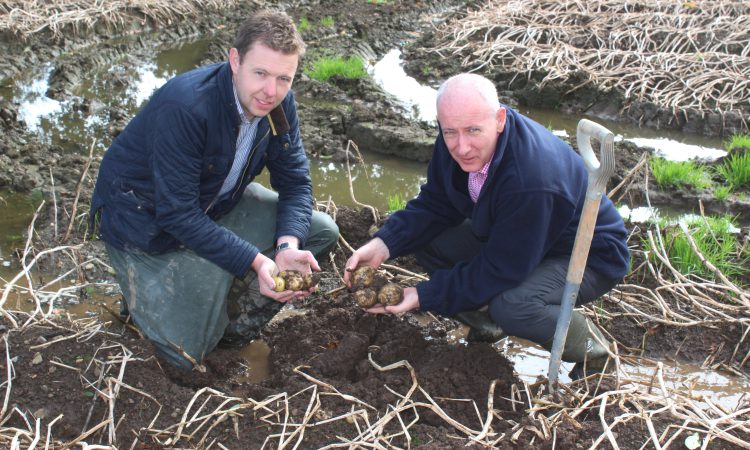 As much as 10% of Northern Ireland’s potato crop still remain in the ground, according to the latest grower-survey carried out by one of the region’s biggest potato packers.

“2019 has been a trying year for growers. Crops were planted out in challenging conditions,” Wilson’s Country Ltd. managing director Lewis Cunningham said.

“A very dry spell followed, which hampered growth rates. But it has been the exceptionally wet autumn that has really hit farmers for six.

“Harvesting operations are now over for the year.

“Normally, the bulk of the harvest would have been completed by the end of October. However, the heavy rains of late summer which persisted throughout the autumn have conspired to get us to the stage we find ourselves at today.

In August, the average rainfall for NI was 162% of the 30-year average with September at 121%, so as farmers started to lift crops the ground was not in ideal condition.

“Ground conditions in recent weeks are atrocious, particularly in Co. Down. As a result, it has proven impossible for many growers to complete the harvest in a timely fashion.”

Better weather on the North Coast

However, it’s a very different picture in Co. Antrim where Ballycastle growers Adrian and David Jamison grow 125ac of potatoes a year and completed their harvest back in the last week of October. The pair sell most of their crop bagged under their own brand but also supply Glens of Antrim Potatoes.

“It’s been a challenging enough season,” David said. “But thankfully, the good spring got us ahead. Harvesting was the same – we were lucky with the weather on the North Coast this year.

Things were on hold for three weeks up here because of the weather but there was a good week after that and most of them are gathered up now.

“I would say what’s still in the ground up here will stay there. Most people around us finished the following week or soon after. ”

But while getting potatoes out of the ground is one issue, potato quality remains another.

“Levels of bruising and damage have been evident this year, resulting in more grading,” Cunningham added.

“The costs incurred by farmers in simply trying to get potatoes out of the ground have increased this year. A combination of a delayed harvest and increased costs is a challenging position for farmers.”

According to the Wilson’s Country representative, potatoes that are in the ground now will remain there until the spring.

“No doubt, frost and the expected waterlogged conditions will further impact on crop yields and quality. However, these matters are totally out of our hands.

We haven’t been alone in these difficult conditions. The recent floods in England impacted most heavily on important potato growing areas. And, again we won’t know how this issue is going to play out until we get into the New Year.

Despite the current challenges Cunningham was very optimistic about the local potato market.

“Kantar market data 52 weeks ending November 3, 2019, notes consumers have been not only buying potatoes more often but also a little more each time they buy, meaning that the total market is up 3.1% in volume and 12% in value, this is really positive news,” he added.