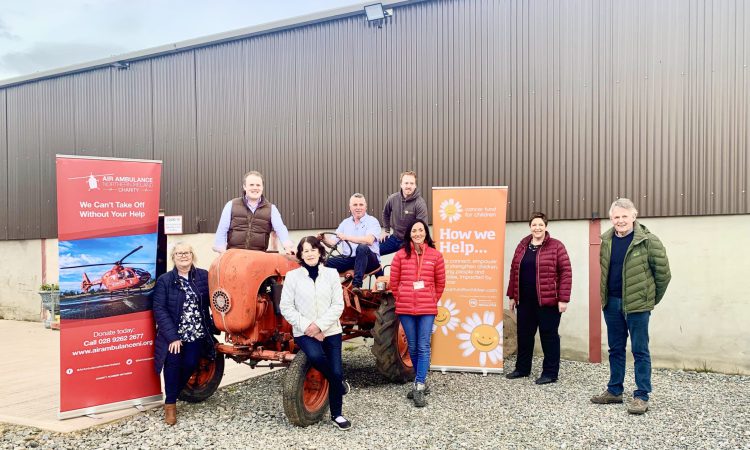 The Auction of Hope was facilitated by Richard Beattie of Beattie Livestock Sales, and included an impressive 161 lots, taking more than three and a half hours to complete.

Speaking on behalf of the AANI Agri-business Group, Libby Clarke said: “We have been completely overwhelmed by the amount of support we have received through this auction.

“As soon as we put out the idea into the media, our phones did not stop with people offering items to auction. We are so, so grateful to each of those businesses who donated – we even had to stop taking lot items because we had so many.

“There wasn’t too much sleep in the run-up to the auction, there was so much to be done and on the night the atmosphere was brilliant. People have told us it felt like a social occasion in their living room, with everyone around the screen watching from start to finish. We are delighted that every lot was sold and so much raised for charity. Thank you to everyone.”

Income for both charities has been hit hard by the health pandemic, and both Air Ambulance NI and Cancer Fund for Children have been overwhelmed by the support and amount raised via the online auction.

Barclay Bell, trustee of Air Ambulance NI, said: “As a team, we are still buzzing from this event and genuinely filled with pride. From the moment the agri-business group got together the energy really has been phenomenal.

“We are astounded at the support from the community and the success really is a testament to the group members, Richard and Selina Beattie, Marteye and the incredible people of Northern Ireland who have donated so generously.

“Despite the pandemic, the air ambulance service has continued to be busy and tasked to trauma accidents every day.

“The medical team are needed by critically ill or injured patients on average twice per day, and these are patients whose lives are at risk in that moment when the worst has happened.

“To date, the service has been tasked out on over 2,054 occasions- this could not happen without donations and awareness-raising of the service.”

‘Virtually all our fundraising events were cancelled’

Cancer Fund for Children chief executive Phil Alexander said: “Cancer, and how it affects children and their families, hasn’t stopped during the Covid-19 pandemic. During the past year, Daisy Lodge has remained open, providing vital short breaks to vulnerable families.

“Our community services have operated online and in-person, ensuring no child faces cancer alone. In a difficult year for fundraising, with virtually all our events cancelled we were thrilled to be one of the chosen charities benefiting from the ‘Auction of Hope.’

“We want to thank the organising committee for all their time and effort in planning an incredible event that took Northern Ireland by storm.”