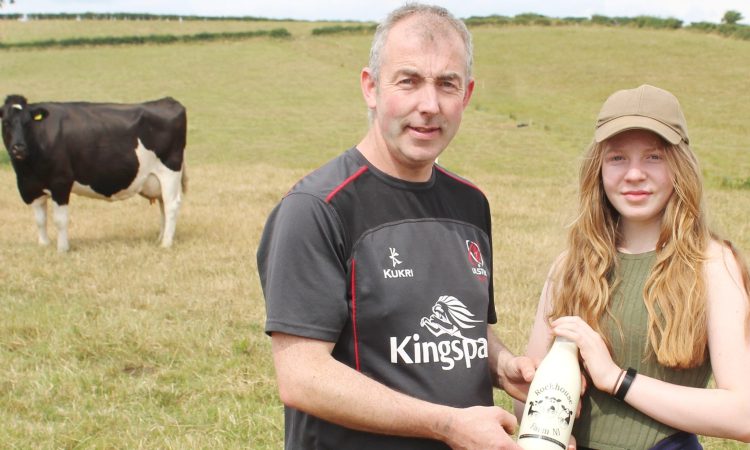 Rockhouse Farm, located halfway between Saintfield and Crossgar in Co. Down, is the latest milk production business in Northern Ireland to establish a vending operation.

Launched at the beginning of May by Brian Hamilton, his wife Susie and family, it really is a case of the new venture going from strength to strength.

Brian explained to Agriland: “Prior to this, we sold all the beef produced by our small herd of suckler cows direct to the public.

The meat operation, which has a strong grass-fed ‘pedigree’, has grown consistently over the past five years with customers coming from as far away as Belfast and Strangford.

“Our aim has been to take a regenerative approach with regard to the development of the farm as a whole.

“As a consequence, we have reduced the level of fertiliser used within the business and put a clear focus on producing as much beef and milk from grazed grass as possible.”

The development of the milk vending business has required investment in a pasteuriser as well as the required bottle and milk vending machines.

A rigorous health inspection and certification process was also key to getting the venture up and running.

Members of the public can source the milk they want in a state-of-the-art building, which has been developed as a cow byre conversion.

Customers can either bring their own 1L bottles or source Rockhouse bottles on site at a cost. The milk is sold at a price of £1/L.

Brian is already reporting a strong passing trade from customers with the vending operation particularly busy at the weekends.

The Rockhouse herd comprises a group of strong-bodied Friesian cows, with bloodlines going back over many generations.

Brian continued: “We are breeding up the cows to full pedigree status at the present time.

The herd is exclusively spring-calving, so the Friesian is very suited to this form of milk production.

“Over the years we selected specifically for longevity. It is an approach that has paid off with many of the cows now in their sixth lactation and beyond.”

Brian confirmed that selling both home-produced milk and beef from the farm, complement each other in terms of driving sales.

“It is still very early days where the milk business is concerned. We are selling full fat milk only from the new vending machine.

“The customer response received up to this point has been very positive indeed,” he concluded.