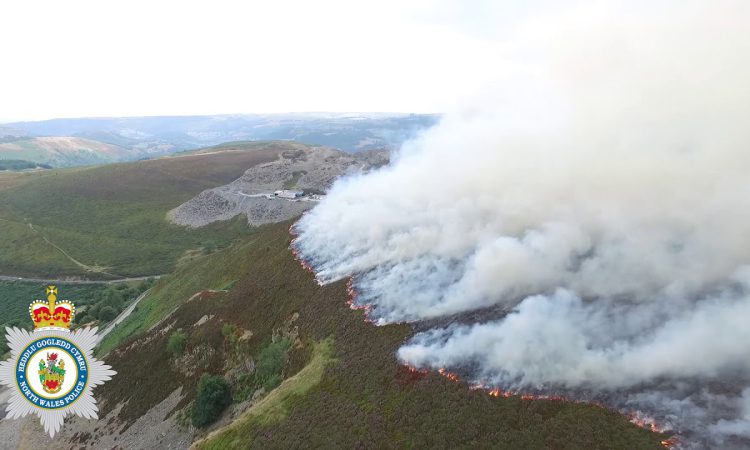 A report into last year’s Llantysilio Mountain fire has found that a “lack of agricultural land management” contributed to the blaze which destroyed more than 290ha of land and burned for two months.

The fire broke out on Llantysilio mountain, Denbighshire, on July 19, 2018 and burned until September 25. At one point it took more than 60 firefighters working together to get it under control.

Denbighshire County Council’s Communities Scrutiny Committee’s review considered the impact of the blaze on the community, businesses and local environment.

The report concluded that land management difficulties over an extended period of time contributed towards the length of time the fire burned.

It said the non-utilisation of grazing rights due to the downturn in the agricultural economy, a situation replicated across Wales, had contributed to the fire’s severity.

It explained that grazing sheep, combined with managed burning and mowing, were all “essential elements” for the maintenance of heathland, and could help reduce the risk from fires.

The report’s recommendations include strengthening multi-agency work when responding to moor fires and coordinating land management activities in moorland areas to reduce the risk of similar fires.

The report also recommended that councillors seek the Welsh Government’s support to maintain the economic and environmental sustainability of upland moorland areas.

Cllr. Huw O. Williams, chairman of Denbighshire County Council’s Communities Scrutiny Committee, said: “The purpose of this review was not to apportion blame on any individual, service, organisation or group with respect of the fire or the response to it, but to better understand and learn from the event to help improve the response and management of similar incidents in future.

“The committee sincerely hopes all agencies, organisations and individuals who participated will find the report informative and useful as a reference point for future collaborative efforts.”

Chief fire officer Simon Smith was among those to welcome the recommendations.

“We strongly believe that fire prevention is key to mitigating against such incidents and that all stakeholders should work together in this regard – and the recommendation to appoint a moorland management officer is welcomed,” he said.

“I would like to take this opportunity to pay tribute to all fire and rescue service staff from across the whole of North Wales who worked tirelessly to bring this incident under control. I am immensely proud of their professionalism in what were some incredibly challenging and unprecedented conditions.”

Bethan Beech, Denbighshire team leader for Natural Resources Wales, added: “Llantysilio Mountain is an important part of the local community and farming economy as well as heathland habitat which is home to black grouse and curlew.

“We welcome this report which makes some valuable recommendations about how last year’s fire was dealt with and how the land can be managed in the future.

The proposal to appoint a moorland management officer to co-ordinate the numerous groups involved on the mountain is particularly exciting.

“We look forward to working with Denbighshire County Council and others on delivering this post and a programme of work to help the mountain recover in a way that reduces the risk of future fires.

“We hope the officer can encourage the common land graziers to exercise their legal grazing rights and actively manage the vegetation. This helps the graziers and also looks after this important wildlife habitat.”