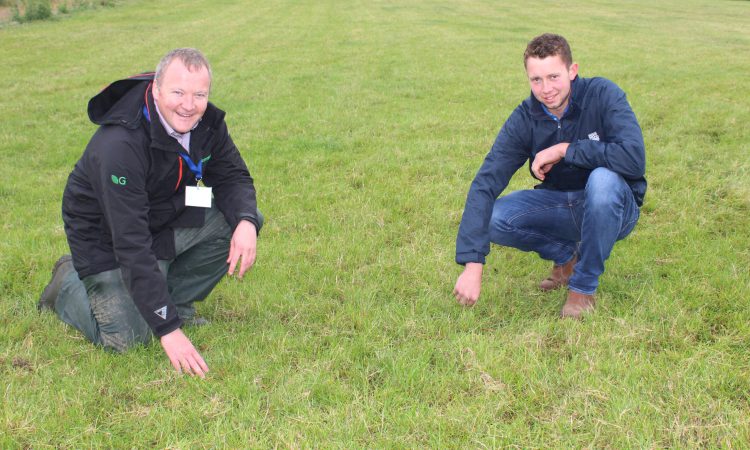 Germinal Northern Ireland (NI) is confirming a four-fold increase in red clover seed sales for the first six months of this year, compared to all of 2020.

“Demand has risen on the back of the growth in herbal leys and the fact that many grassland farmers now view clover as a means of significantly reducing their nitrogen fertiliser bills,” the company’s David Little told Agriland.

Sales of clover seed will, almost certainly, increase further as we head into the autumn months.”

Little was speaking at a forage farm walk, hosted by Fane Valley Co-op on the Lisburn dairy farm of Michael Drayne, this week.

He confirmed that August is a very suitable month to tackle any form of grassland reseeding programme.

“An existing grass ley can be burnt down with Roundup three weeks before cultivation work gets underway. This is particularly the case if the grass seed is to be direct drilled,” Little added.

My personal preference would be to go in with the plough to get the process underway. If a direct drilling option is looked at, I would encourage at least two passes with a disc, before the grass seed is sown out.

“Irrespective of what system is chosen, the establishment of the subsequent grass sward should be equally successful, provided the job is done right.

“The objective is to provide a fine and firm seed bed for the new grass ley that is to be established. Lime and fertiliser should be applied once the seed bed has been prepared.”

Little went on to recommend land rolling subsequent to lime and fertiliser being applied.

Where the selection of grass seed mixes are concerned, Little recommended the strong inclusion of diploid varieties for grazing swards.

He continued: “The inclusion of Timothy varieties should also be considered in areas where heavy soils predominate.”

Significantly, the Germinal representative did not recommend the inclusion of clover in silage swards.

He said: “The clover will not be able to compete with the large quantities of nitrogen applied to nitrogen crops. This is particularly so, given the growth in four-cut silage systems.

One of the most effective ways of establishing clover into grazing leys is to over sow the new sward during the summer months when there is more heat in the ground.

“An August reseed will allow the new sward to be sprayed for weeds during the subsequent autumn months. Chickweed can get ahead of the grass if it is allowed to grow, unchecked, over the winter months,” he added.

“It is important that new grass swards are grazed lightly until such time as they are well established. This will help the sward thicken out.

“Swards should not be cut severely on the first occasion if established for silage making purposes,” Little concluded.