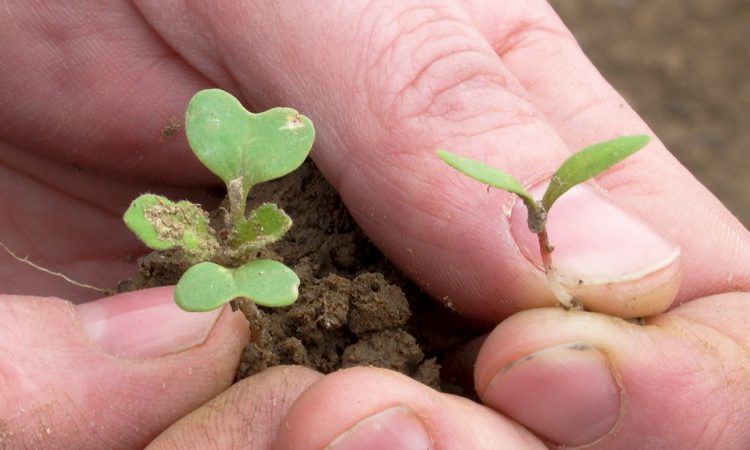 Using data from the world’s longest-running experiment – the Rothamsted Research Broadbalk wheat trial in Hertfordshire in the UK – the researchers found that, on plots where herbicides have never been used, yield losses to the threat of weeds have been consistently increasing since the 1960s.

Less than a third of the harvest was lost to weeds in the first ten years of the dataset, but between 2005 and 2014, this had risen to more than half.

The team from Rothamsted Research who carried out the study, say this is due to weed burdens doing better than crops in a warming climate, coupled with a shift towards shorter crop varieties that get shaded out by the taller weeds.

And just like our crops, many weed species have also benefited over this period from increased use of nitrogen fertilisers.

In addition, more than half a century of consistent chemical spraying has also led to the rise of herbicide resistant weeds, threatening our ability to protect the gains in crop productivity achieved since the 1960s.

“Crops are now more vulnerable to weed infestations than before the advent of herbicides, according to a new study which says weeds pose an unprecedented threat to our food security.

“Reducing yield losses from weeds is increasingly challenging because of the evolution of herbicide resistance and we can no longer rely on herbicides alone to counter the increasing threat from weeds.

“If we compare yield lost to weeds in the first ten years of the dataset, weeds ‘robbed’, on average, 32% of the yield compared to 54% in the last ten years of data.

“Our results demonstrate that weeds now represent a greater inherent threat to crop production than before the advent of herbicides, and integrated, sustainable solutions to weed management are urgently needed to protect the high yield potential of modern crop varieties,” he added.

Alongside the ever-increasing losses to weeds, the analysis of data showed that weeds also reduced wheat yields proportionally more on plots with higher rates of nitrogen fertiliser.

On comparable plots where weeds were controlled with chemicals, higher wheat yields were achieved when more nitrogen fertiliser was added – meaning that herbicides are most beneficial on the highest yielding wheat fields.

The Broadbalk winter wheat trials were established in 1843 to contrast different amounts and combinations of inorganic fertilisers compared with farmyard manure on wheat yields.

Since the mid-1960s, some plots have had herbicides applied and some have not.

The team looked at data from 1969 onwards – around the start of the so-called ‘Green Revolution’ when higher-yielding wheat cultivars, and increased nitrogen fertiliser use became the norm worldwide.

However, as their data clearly demonstrates, these increased global yields were only made possible with a concurrent increase in the use of pesticides.

A total of 41 weed species were recorded in the plots, with farmers’ main nemesis – blackgrass – being an ever present – and especially abundant on plots with high fertiliser rates.

In addition to the rise of herbicide resistance, the adoption of shorter crop varieties – favoured for putting more nutrients into the grain and not the stem – has also led to increased yield losses, as the diminutive plants are often out-competed by much taller weeds.

“Moving forward, it is likely that plant breeders will need to consider traits that reduce yield losses from weeds as well as those that optimise yield potential.”

The final factor responsible for the increase in weed pressure is climate change. Between 1969 and 2014, average air temperatures measured at the meteorological site local to the Broadbalk experiment have risen consistently.

Calculated over the main growing season for UK weeds, average temperatures have steadily increased and are now approximately 2°C higher than they were in 1969. As the growth of the weeds responds more to warming temperatures than the crop, this has given the weeds a competitive advantage.

“Management and climate change have combined over the past 45 years to increase the threat from weeds.

If we could no longer rely on herbicides, it could be argued that, in terms of weed pressure, the situation is now worse than before their widespread introduction in the 1960s.