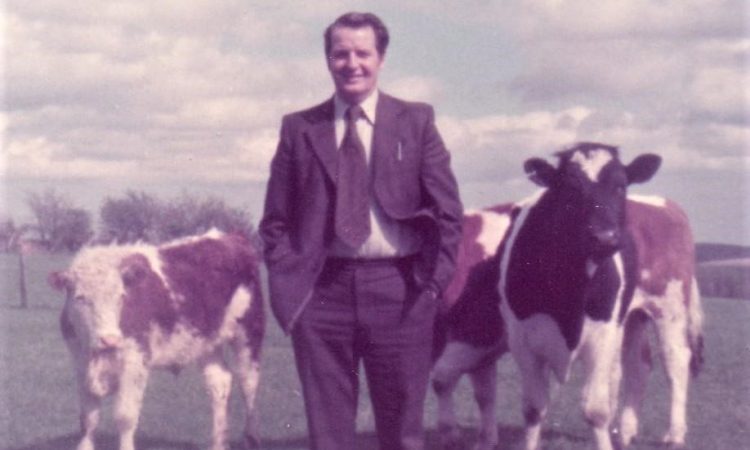 Image reproduced with kind permission of the Poots family

Tributes have been paid tribute to long-standing Northern Ireland politician and farmer Charlie Poots who passed away this morning (April 23).

Mr. Poots was a founding member of the Democratic Unionist Party (DUP) and his son, Edwin Poots, currently holds the position of Agriculture, Environment and Rural Affairs Minister in Northern Ireland.

The pair worked together on the family farm in Legacurry, Co. Down.

Mr. Poots was an industrious farmer, keeping beef cattle, poultry, pigs and sheep and was keen to expand the farm, part of which was once owned by the late agricultural engineer Harry Ferguson.

But he was just as hardworking outside of the farm, narrowly escaping a murder attempt by the INLA in 1976.

“He served in both the Northern Ireland Assembly from 1973-1974 and the Constitutional Convention from 1975-1976, but it was in local government where Charlie gave a lifetime of service.

“He spent 24 years as a councillor in Lisburn, including serving as deputy mayor in 1991-1992, before stepping down from elected politics in 1997.

Charlie’s service to the people of Lisburn was marked in 2009 when he was made a Freeman of the City of Lisburn and his loss will be felt by many people, but particularly in that city and amongst the people to whom he gave such dedicated representation.

“The tradition of service to the people did not end with Charlie’s retirement, however. But continues today through his son Edwin within the Northern Ireland Assembly and his grandson Caleb McCready who was elected as a DUP councillor in the Downshire area of Lisburn just last year.

“My heartfelt sympathies are with my friend and Executive colleague Edwin and the wider Poots family at this most difficult of times.

“Having been involved in caring for Charlie over recent years, I know how difficult it was not to be close to him as he approached the end of his life.

“The current circumstances make it difficult for us all to express our thoughts directly with those who have lost someone.

“However, I hope they can take some comfort from the very many people who will have been impacted by Charlie’s life and work and who will feel his loss.”

‘Worked night and day to provide for his family’

Son, Edwin, explained his father had to work extremely hard for everything he ever had.

“He was born in 1929, the year of the Wall Street Crash, raised during a depression and World War,” he said.

“He accepted Christ when he was 14, met the love of his life, Ethel, when he was 18, and married five years later.

“They had four children – the late Stephen, Angela McCready, Joy Lynn, and myself. Mum was plagued with ill health from shortly after they married, having almost lost her at least three times, she predeceased him in 1996.

“He had suffered a debilitating stroke in 1993, in spite of being told he wouldn’t walk again, he did and insisted on driving again which only stopped in June last year.

He stood in 1969 with Ian Paisley, they became great friends and fought a further nine elections thereafter. In 1976 the INLA attempted to murder him, while the car was hit, he narrowly avoided being shot.

“He was elected to Stormont in 1973 and 1975 and served on Lisburn Borough Council for 24 years, he was a former Deputy Mayor Alderman and Freeman of the City.

“His love in life was farming – rearing calves breeding sheep, turkeys hens and pigs – he worked night and day to provide for his family.

“Our family will miss him greatly he was a real character, could be mischievous liked a bit of fun and practical jokes, fiercely loyal and had incredible resilience.

“I know many people would have wanted to sympathise with us and can’t in the usual way, but we as a family appreciate all your thoughts and prayers at this time.”