Watch: 40 ‘Lely’ cows make the trip to the Balmoral Show

Over 100,000 people are expected to travel to Lisburn for the 149th Balmoral Show, which kicks off today and runs until Saturday.

A key draw of the show, as has been the case in recent years, is the Lely live robotic milking exhibition.

A group of 40 Holstein Friesian cows, from the Rocavan Holstein herd of Broughshane, Co. Antrim, made the short trip to a purpose-built dairy unit at Balmoral Park.

Below, we take a look at the cows’ departure from the farm right up to the point of arrival at the Lisburn-based venue.

Visitors to the show will be able to see the Lely Astronaut milking robot in operation as the cows will be milked over the duration of the show.

The group of 40 cows make up a small proportion of the 1.2 million dairy cows milked by Lely robots across the world on a daily basis.

As well as having the milking unit at the show, Lely will be launching its new Discovery Collector 120 this year.

The new Collector 120 is described as being a revolutionary robot, designed for solid floor cleaning that takes the manure away rather than scraping it.

Owner of the cows, Alistair McCullough, said he was delighted to be supplying the cows for this year’s event.

“We started milking with our first Lely Astronaut A4 robot in 2012 and installed a second one in 2014.

“It has been a huge success with increased milk production, healthier cows and it’s enabled us to free up more time on-farm to do other jobs.

“With a pedigree herd, fertility is key and the heat detection system has been invaluable in flagging up cows that are in heat, which I would not have seen in the past,” he said. 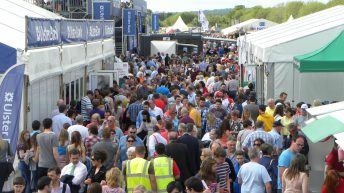 Going to Balmoral Show? Here’s how to get there