Home » Dairy » Video: Behind the scenes access to one of Morocco’s largest dairy farms

Video: Behind the scenes access to one of Morocco’s largest dairy farms

Ferme Laitiere is one of Morocco’s largest dairy farms with some 2,500 cows passing through the 100 unit milking parlour three times each day.

More than 600 times the size of the average Moroccan dairy farm, which consists of four cows, the farm produces almost 24m litres of milk on an annual basis – one of only 11 farms in Morocco capable of reaching such a level of production.

All of the milk produced on the farm is supplied to Danone, and as a result strict parameters are in place in regards to milk quality, with milk with a somatic cell count of more than 300,000 rejected.

Along with a substantial milking herd, the farm also houses over 2,700 young stock, with both the milking and young stock herds being managed by a workforce of 150 staff.

Video: The sheer scale of the 2,500 cow dairy farm

Despite the size and scale of the dairy farm, there are plans to increase the number of cows in the herd to 5,000 over the coming years.

At present, the farm has capacity to house 3,200 cows so investment in additional housing on the 50ha dairy site will be necessary to house any future additions to the herd.

The cows are ‘extreme type’ Holstein Friesians capable of producing 9,500L of milk on an annual basis and are currently averaging 31.52L/day.

Breeding and calving on the farm is year round, leading to an impressive retention rate as 95% of the cows in the herd make it from their first to second lactations.

Video: Behind the scenes on one of Morocco’s largest dairy farms

The cows in the dairy herd are fed twice each day on a diet of maize silage, wheat and concentrate.

The maize silage used in the cows diets is grown on a 570ha block and given the dry weather, an irrigation system of is required to grow the maize silage crops.

The 570ha block used to grow maize features 23 different irrigation points and a total of 15 forage harvesters are used to safe the maize crop.

Concentrates, consisting mainly of soya, are imported onto the farm to ensure that the cows diets contain an adequate level of protein.

Parlour runs for 18 hours each day

Cows on the dairy farm are milked three times daily, with each milking taking six hours to complete in the 100 unit herringbone dairy parlour.

This means that the parlour runs for a total of 18 hours each day.

And to ensure that milk produced from freshly calves, sick or high cell count cows does not make it into the daily collection pool, the farm has a separate 20 unit parlour which is used to milk these cows throughout the year. 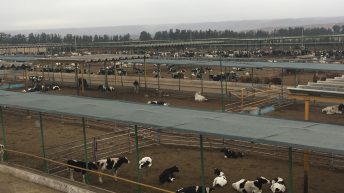 Pics: 7,000 cattle feedlot with a difference in Morocco