Bobcat mini-excavator proves its worth on drainage projects 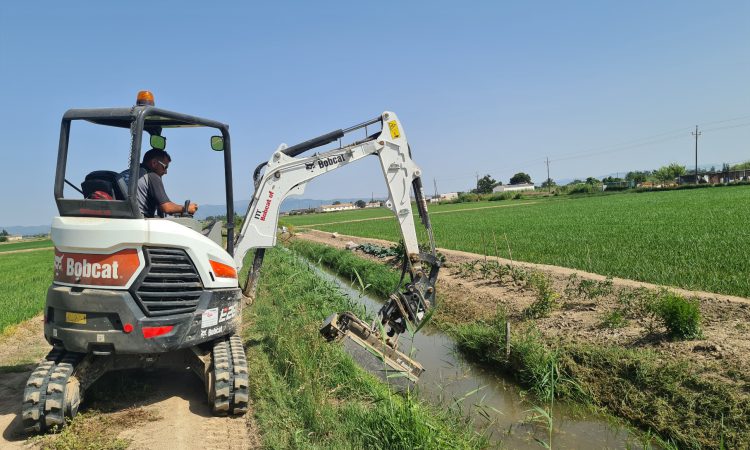 In the Tarragona region of Spain, the General Community of Regants of the Dreta Sant de Sant Jaume d’Enveja is in charge of managing irrigation waters, so that each member of this group of irrigators receives the exact same amount of water for their rice plantations, and has enlisted the help of Bobcat.

It is an association made up of 1,166 farms, distributed over more than 2,000ha of agricultural land.

The Bobcat flail mower is designed to allow a Bobcat mini-excavator to cut vegetation on uneven terrain where other machines cannot work, and is equipped with a retention guard to prevent flying debris.

Its self-levelling function ensures that it tracks the surface, even while the E26 is being driven along the edge of the drainage channels, according to the company.

Miguel Avila, water manager for the General Community of Regants of the Dreta Sant de Sant Jaume d’Enveja said: “We needed a very compact and manoeuvrable machine, and with a sufficient flow rate to be able to move along the margins and clear the brush in motion.

“We also wanted both the machine and the attachment to be the same brand to avoid problems.”

The Bobcat E26 mini-excavator and flail mower attachment combination eliminates the vegetation that grows in the drains while the fields are flooded.

The bucket on the mini-excavator is used to unblock any specific blockages in the drainage system.

During this period, the company emphasises that maintenance is of vital importance to ensure the water flows correctly.

When the harvest is in and the fields are dry, the E26 mini-excavator is used to carry out excavation tasks using two Bobcat buckets – a 120cm unit for cleaning and a 30cm bucket for excavation.

Previously, weeds were cleaned manually and the community has used the mini-excavator and brush cutter over a 595m long section of ​​a plantation.

To clean this area manually would have previously required about 42 hours with a crew of three people, but with the Bobcat E26 mini-excavator and the attachment, this can be carried out in just seven hours, according to the company.

Miguel Avila added: “We chose this model because it was perfectly adapted to the conditions of the terrain and its weight is ideal to be able to move between the plantations without affecting the work surface.

This machine weighs 2700kg, which we would say is the maximum acceptable weight to move in a very narrow area without affecting the terrain, often with water present, so the tracks allow you to manoeuvre without problems.

“With more weight we could no longer work and we would have lacked the oil flow for the attachments,” he continued.

“Its width was also an essential point; there are pathways of 2m width, but in many cases they are only 1.7m wide and the Bobcat mini-excavator measures only 1.5m from one track to the other, which allows it to work without problems and also guarantees the safety of our operators.”

Miguel Avila continued: “Many manufacturers told us that we could do clearing tasks with their compact equipment, some of them even with the handicap of having to stop due to machine heating issues, or others that could not move and clear at the same time.

No one else showed their system in action like the Bobcat team did. We had no experience with this type of machine, so we also let ourselves be guided by other farmers who were already using them.

“To stop a machine is to lose a lot of money. To make them profitable, our machines usually work from 7:00a.m to 9:00p.m, whatever the weather, but especially July and August, which are the months when the vegetation is highest.”