Style and legacy feature among machines at Cheffins upcoming sale 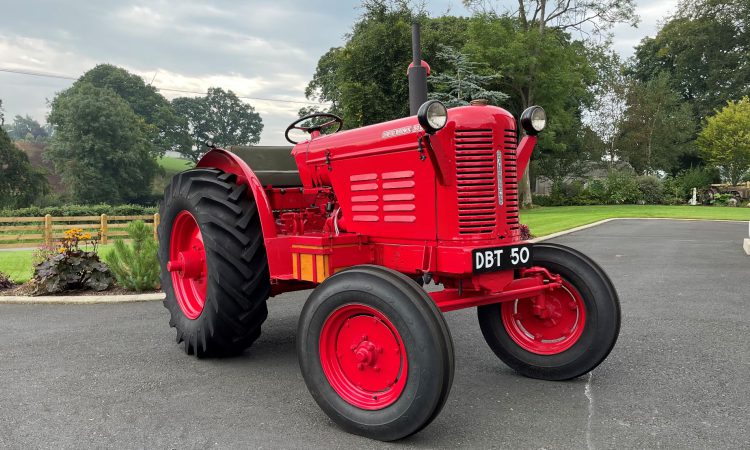 Cheffins sales always seem to attract an interesting mix of tractors, boasting both value and legacy, and the auction planned for the latter part of October, in Cambridgeshire, is no exception.

With the continuing interest in Fords of a certain era, whether they be original factory models or four-wheel-drive conversions, there is little surprise in seeing them being busily traded.

Yet there is life beyond the big blue and a handful of other lots are of equal interest historically, if not financially.

The quality of style

One attribute of tractors that rarely gets mentioned, or attracts a premium in the ring, is the styling. Perhaps it’s because appreciation of the lines is considered a little less than macho in a testosterone-fuelled world.

Tractor manufacturers know otherwise though, and over the years, have spent a good deal of time and effort getting their products to look right, a part of the design process which is more important that ever.

According to the latest census, over a third of farmers in the US are women, and women tend to be more aware of design and colours.

This fact won’t be lost on on manufacturers, which may well account for the more rounded lines of tractors today.

Where it all started

One company which led the way in introducing industrial design to tractor manufacturing was John Deere.

Back in 1937, it invited the famed designer, Henry Dreyfuss, to cast his magic over its B series tractors.

The resulting art deco style was a winner and was extended to other models, including the L series.

In 1942 the LI, or industrial version, was introduced, one of which is offered here in what looks like original condition.

The coming of the space age

The world was given over to the cold war and space race during the 60s and the fashion was all about streamlining and jet packs.

Ford was not oblivious to this and the six-cylinder 6000 Commander model (built from 1965-67) reflects the appeal of intergalactic warfare.

This was the tractor that had already bagged the ‘6000’ moniker for the American market.

By the late 1970’s Leyland tractors had been sucked into the great British motor industry monolith, and investment decisions were no longer its own to make.

Yet, management knew the range needed modernising, so in 1980, it launched a new look with many mechanical upgrades as well as a completely new livery.

Two years later the company was acquired by Charles Nickerson, owner of Marshall tractors based in Gainsborough, Lincolnshire.

With the less angular Sekura cab and a colour scheme of ‘golden harvest’ and black, the machines looked modern and capable, and most definitely not American.

Styling was not the foremost concern when Maurice Wilks, of the Rover Car Company, sat down and began to draw up plans for a farm utility vehicle that would be part personal transport and part tractor.

The distinctive look of the vehicle that finally emerged was due to the post-war shortage of steel. However, aluminium from bombers was in plentiful supply at the time, a material that is difficult to shape, so only flat panels and slight curves were possible.

Although the style was born of necessity rather than artistic intent, it worked brilliantly, and this legacy remained with the vehicle up to the latest Defender series.

The Land Rover went on to to become a legend in its own lifetime. Cheffins has a short wheel base example complete with its original engine.

Bringing the tractor to the farm

If the Land Rover introduced the British farmer to the utility vehicle, then it was the Overtime that was instrumental in helping displace the horse on British farms.

Purchased in large numbers by the War Office during WWI, it was put to work throughout Britain and Ireland in a bid to maintain food production as German U-boats decimated the merchant fleet.

It has two further claims to fame. The first is that it was one of the machines that motivated Harry Ferguson to develop the three-point linkage.

The second is that the manufacturer, over at a town called Waterloo, Iowa, was purchased by John Deere in 1918, marking the beginning of their association with tractors.