Home » Machinery » A glance back in time as 750,000th JCB backhoe rolls off production line

A glance back in time as 750,000th JCB backhoe rolls off production line 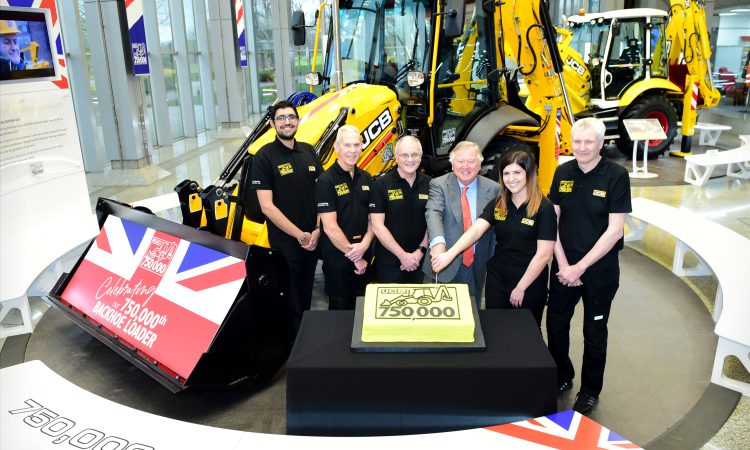 The landmark machine was driven off the line at the company’s factory in Rocester, Staffordshire, England – the same location where the first JCB backhoe was manufactured almost 70 years ago.

JCB through the years

The machinery giant notes that it was in 1953 that company founder, Joseph Cyril Bamford, set about producing the JCB backhoe loader, which it says created, for the first time, a single machine which combined a front shovel and rear excavator arm.

In its first full year of production in 1954, just 35 of the machines were produced and it took more than 20 years for the first 50,000 to be made. JCB now manufactures backhoe loaders in the UK, India, Brazil and the US.

Commenting today, JCB chairman Lord Bamford said: “Some of my earliest childhood memories are of watching our first backhoe loaders being produced at Rocester and it’s incredible to think we have now manufactured 750,000.”

The 750,000th model is a special edition of JCB’s latest 3CX backhoe loader, bearing what the firm describes as “a unique livery and comprehensive specification”.

From blue and red to ‘JCB yellow’

The company’s first backhoe was the JCB Mark I; this was followed by the Hyddra-Digga in 1956. Both these early machines came in blue and red livery and it was only in 1960, with the launch of the heavier, more powerful JCB 4, that JCB’s yellow branding made its first appearance.

In 1980 – in a £24 million investment – the JCB 3CX was launched, which the British firm claims “was the real catalyst for growth of backhoe sales and for JCB”.

Fast forward to today and the firm points to its current generation of backhoe loaders, noting features such as automatic deployment of stabilisers on unlevel ground, its Smooth Ride System and a TorqueLock feature which it says reduces on-road fuel consumption by up to 25%.

The latest backhoe production milestone comes after JCB celebrated the manufacture of its 500,000th backhoe in December 2012 – a 5CX, the most powerful commercially available backhoe JCB has ever made.