Two days of vigorous and lively debate over some of agriculture's most controversial topics saw University College Dublin (UCD) come out as this year's All-Ireland champions.

The team of young orators were one of six taking part in the fifth Annual Great Agri-Food Debate, organised by Dawn Meats and McDonald’s Ireland in Queen’s University, Belfast.

Topics at this year's Great Agri-Food Debate included the environmental impact of veganism, free trade, subsidies and gender inequality in the agri-food industry.

Farmers will be relieved to hear that by the end of the event, subsidies were deemed crucial to the future of farming - at least among the island's agricultural colleges.

Six third-level colleges took part in the all-island competition, which was hosted in Northern Ireland for the first time this year.

The competition is particularly challenging as the arguments debated are drawn at random and can often be in contrast to team members' personal views.

Aside from the winners of each topic, awards were also made to the best speaker for each debate with two spot prizes for the funniest quotes.

WIT’s Martin Beausang was the winner of the Best Speaker Prize in the final debate, while Ciara Byers of UCD and Roisin O’Donnell of WIT were awarded Best Speaker in their respective semi-final debates.

The debates were moderated and judged by a range of representatives from the agri-food industry, including:

After coming out top in the semi-final against UL, UCD went head-to-head against WIT for the finals to debate the motion 'Global free trade, not subsidies will deliver a sustainable future for European agriculture'. 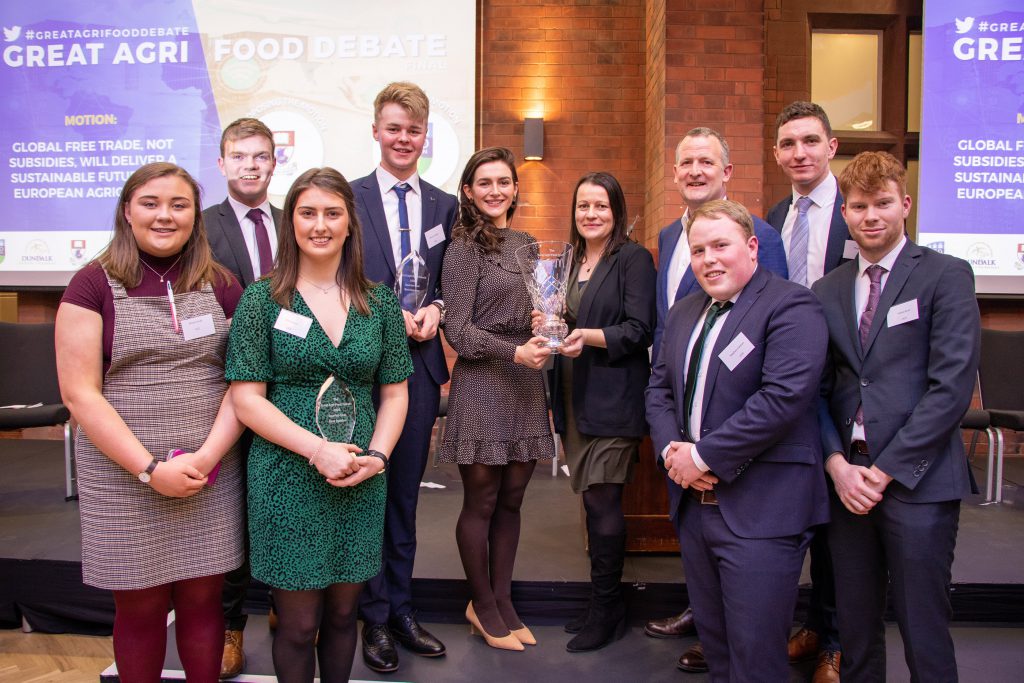 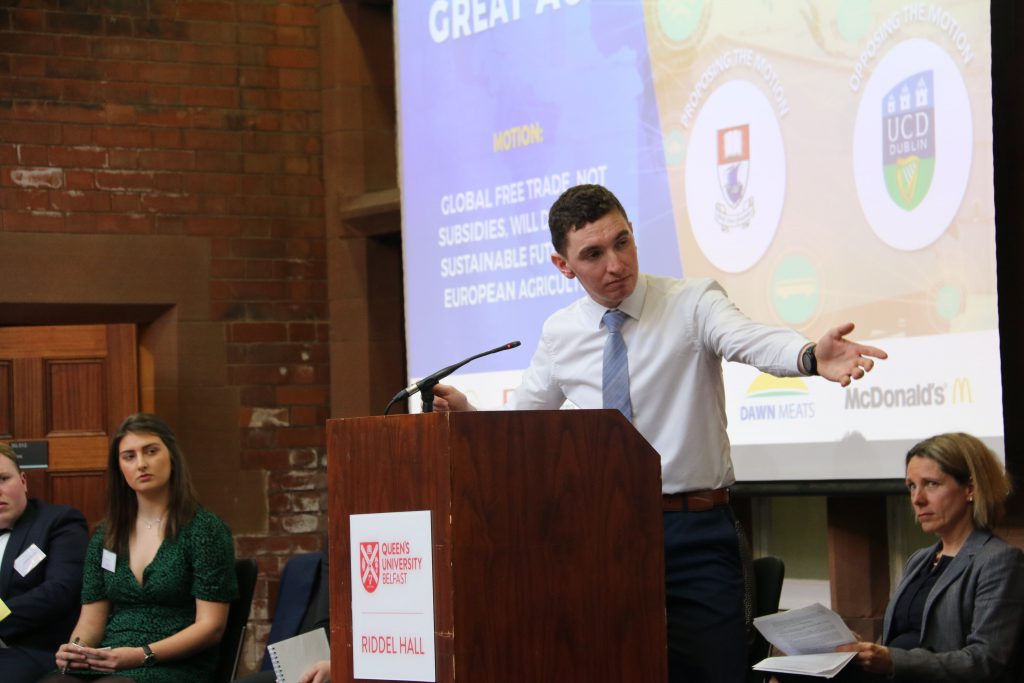 "They want us to open our borders to 195 countries with different laws, different ethics - now forgive me for thinking there's a flaw there."

A key point was her warning that global free trade would lead to a "race to the bottom", with little regard to environmental sustainability.

"If we carry today's motion we welcome the future demise of sustainable European agriculture.

Global free trade leads to a race to the bottom and it will provide a reason to get rid of local markets, depleting our local communities - the price that we pay for CAP is a price on the priceless.

The team from Waterford Institute of Technology (WIT) has reached the final for the last two years running, taking home the title last year on their home turf.

This year they overcame strong competition in the semi-final from DkIT to reach the final where they faced off against UCD on the topic 'Global free trade, not subsidies, will deliver a sustainable future for European agriculture'. 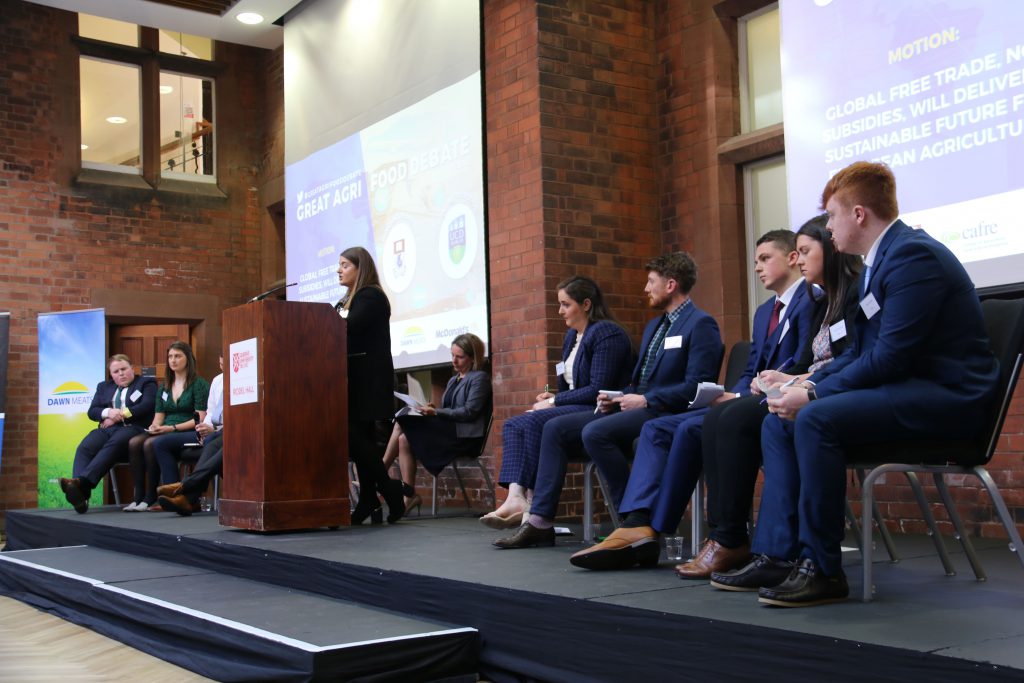 The competition couldn't have been tighter, with WIT team leader Danielle Mulligan painting the picture of a sustainable industry as a stool with three legs - economic, environmental and social.

Proposing the motion, Ms. Mulligan maintained loss-making farm practises are being artificially sustained, with subsidies acting as a “scaffolding” mechanism.

"The opposition might try to romanticize you today into thinking that family farms need subsidies to survive. Well, Valentine's Day is long passed," she said.

"If you think of an old milking stool it has three legs - just as a sustainable future has three legs - economic, environmental and social. Subsidies are only the duct tape masking the cracks in the wood. Our message is simple; if you need a subsidy to make something sustainable then it's not."

Mulligan argued that free trade offered a level playing field and that new technologies such as vertical farms would make improve productivity on European farms.

Another key argument was that farmers should push for fair pay for their produce.

"It's disgraceful that proud farmers would let your dignity be tarnished by being underpaid and handed a sum of money to keep afloat," she said.

It was only the other night when I was out calving a cow that I thought to myself, 'What is it all about?' We work hard day and night to produce a premium, high-quality, safe product for the consumer yet we are underpaid for the high standards of work we produce.

"It was then I realised that this motion presents us with an opportunity to create a sustainable future, which has three sturdy legs all supported by the bolt of our industry, which is global free trade." 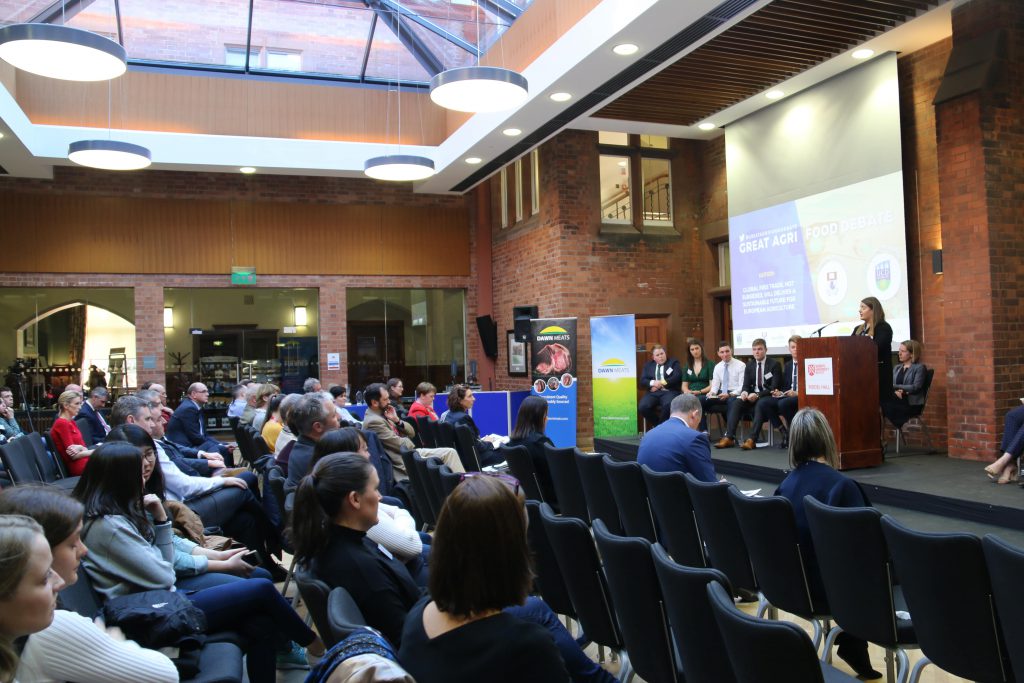 Commenting, Niall Browne, Dawn Meats chief executive, said: “Each year we try to present students with controversial and substantive motions that are central to our industry.

"This allows students great latitude to display their skills in crafting, presenting and defending their arguments.

"Every year we are impressed by the technical knowledge of the teams and their confidence, wit and assuredness in presenting their views to us."

Nina Prichard, head of sustainable and ethical sourcing, McDonald’s UK & Ireland added: “It’s wonderful to help deliver such a high standard of informed and impassioned debate, with students from colleges across the Republic of Ireland and Northern Ireland participating.

"McDonald’s Farm Forward programme aims to shape a positive future for the agri-food sector across Ireland and the UK, we believe young people are vital to this conversation; which is why it is so encouraging to see students debating the issues of the day and coming up with innovative solutions to some of the challenges faced.”