Improving genetics is the key to reducing farmers’ carbon footprints and maximising efficiencies, a beef research farm in Shropshire has demonstrated.

The livestock industry is under intense pressure to reduce its emissions, and research has shown that doing so has a beneficial impact on the bottom line.

According to information from thousands of animals processed by ABP - the largest meat processor in the UK - significant environmental and financial gains can be made through simple breeding choices.

ABP said that it has evaluated its farm to fork carbon footprint, and has a goal to reduce its emissions by 1.9 million tonnes by 2030.

With 78% of its emissions linked to live cattle - ABP said that its focus has been on reducing the animals' footprint, and it has made massive progress in the area of genetics.

“For ABP to play its part in the environmental crisis, we need to look at how to support and enable our farmer suppliers to lower their footprint,” explains Dean Holroyd, group technical and sustainability director at ABP.

Economic and environmental benefits travel hand in hand - if you have efficient animals then it helps the bottom line and the environment.”

However, every farm is different, so the firm is working with a range of research partners to identify the easiest and largest wins. So far, it appears that genetics have the greatest role to play.

“The idea is that we have a research pipeline and demonstration farms to identify new thinking, test it in the field and then share and multiply the benefits,” Holroyd added. 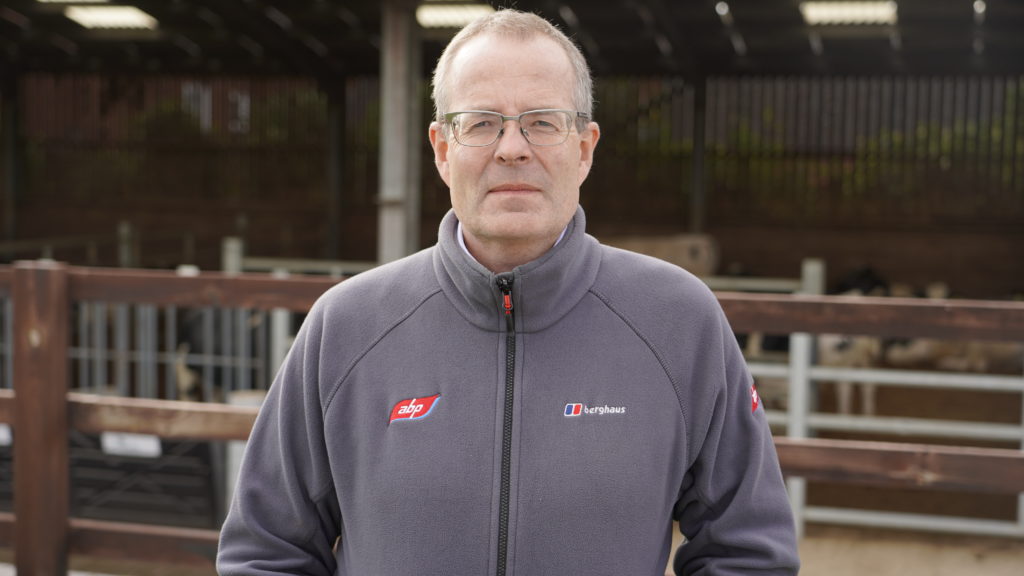 With over 20,000 calves a year going through ABP’s Blade Farming system, it has been able to evaluate the impact that different genetics have on productivity.

Working with Genus, it said that it has looked at growth rates, feed conversion efficiencies, carcass values and eating quality - as well as calving ease and fertility performance in the source dairy or beef suckler cows.

So far, due to the abundance of data, ABP said that it has concentrated on Aberdeen Angus sires, but is expanding out to other breeds as more data becomes available.

The farm and other Blade rearing units have also looked at feed conversion efficiencies; over a 12-week rearing period, progeny from sire 12 averaged 6.4kg of feed per kg of growth, compared to sire five at 7.37kg.

“At a value of £1.20/kg per kg liveweight that equates to a £24 variance,” explains Holroyd. “So you have similar feed going in but extra weight coming out.”

Bringing all of that information together has enabled the firm to identify the most efficient sires: Progeny from the top five averaged a gross margin (value minus variable costs and overheads) of £225.79 whereas offspring from the bottom five sires averaged just £81.28 a head.

When it comes to environmental impact, those efficiencies have a marked effect.

At Bromstead, based on a slaughter age of 20 months, offspring from the best sire averaged 7.29kg of carbon equivalent (CO2e) emissions per kg of meat (2,543kg/head), while those from the worst sire averaged 8.53kg.

Looking at slower finishing systems, the impact is even greater; based on ABP national data, all stock slaughtered at 20 months average 8.12kg of emissions, while those finished at 24 months average 9.49kg and at 30 months 12.09kg.

“The average age at slaughter in the UK is 26.5 months, so emissions average 10.76kg (3,498kg/head); that’s 47% more than offspring from the best sire at Bromstead, finished at 20 months,” Holroyd continued.

If you roll that out across the industry, that will have a huge impact.”

So how has ABP collected all of this data, and how will that roll out to the wider industry?

According to Andrew Macleod, farm manager at Bromstead, it used the latest technology to monitor feed intakes and emissions, and will soon be adopting a similar approach to the wider grazing platform.

“We’re here to do a commercial assessment of the options,” Macleod explained. 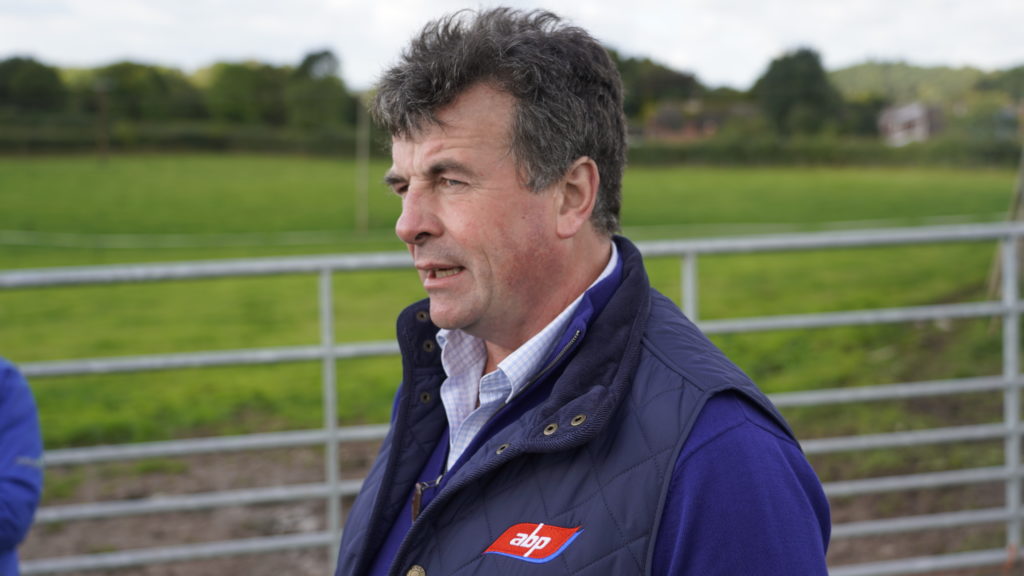 Bought in 2015, the 153ha farm comprises 134ha of grass and arable land, plus woodland and ponds.

Macleod takes in 120 calves, aged 16 weeks, every three months and rears them to finish at 20-months-old.

Two thirds are Aberdeen Angus x Holstein and the rest are a mix of British Blue, Holstein and Wagyu crossbreds.”

The cattle are grazed over the summer and finished indoors on an ad-lib total mixed ration comprising home-grown grass silage, maize and barley with distillers’ grains and high protein nuts.

They are housed in groups - calves bedded on straw and finishers on sawdust - and weighed monthly through a Temple Grandin-designed race (weekly when closer to finishing).

“We keep them on the same feed as the calf unit to start with, and then gradually move them onto the more forage-based diet,” Macleod explained.

That ensures we don’t get a check in weight gain; small management tweaks make a big difference in terms of days to slaughter.”

He samples the silage three times a week, so that changes to the diet can be made accordingly for consistently high dry matter (DM) intakes.

Although the farm initially focused on finishing as early as possible to maximise efficiencies, it has now moved to a more grazing and forage-based system to better reflect other UK farms.

With a 75% forage diet, it aims to finish cattle at 20-months-old, with heifers at 310kg deadweight and steers at 320kg.

The trial shed features a Growsafe feeder system; each feed bin is on scales and logs the electronic identification of every animal as it eats. In this way it can show when each animal eats, how long for, and how much feed it consumes.

The farm has also been trialling ZELP collars which measure and reduce methane emissions.

These halters sit over the cows’ nostrils and collect the methane into a small receptacle on their polls, where the methane is chemically broken down into its non-harmful components - a little like a catalytic converter on a car. 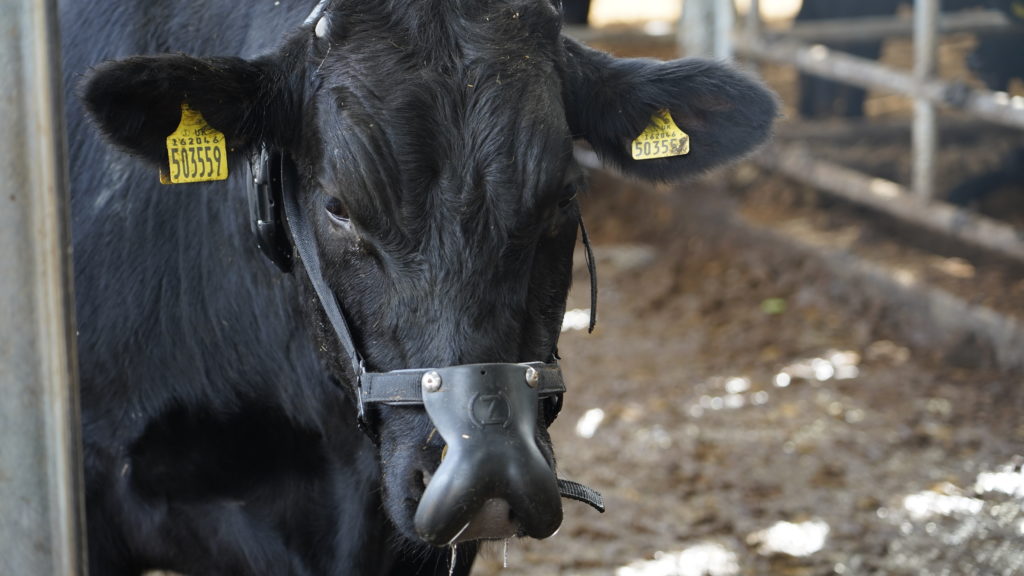 In laboratory tests at Reading University, these devices reduced cows’ methane emissions by 50%.

“It takes about 24 hours for the cows to acclimatise to wearing them, but aside from that, there is no impact on feed intakes or behaviour,” Macleod added.

The farm is also about to take delivery of a Green Feed chamber, which will monitor methane emissions from each cow as it eats from the bespoke feed bin.

Richard Phelps, ABP’s agriculture director and managing director of Blade Farming said: “As an industry, we’re challenged a lot on our environmental credentials. We need to move away from being defensive to finding solutions and giving farmers positive tools to them to use.”

Bob Carnell, CEO of ABP UK added: "By monitoring and reducing cattle’s environmental footprint, farmers will then be able to monetise it through carbon trading.

This is cutting edge stuff, and we need to talk positively about what the industry is doing to address the public’s concerns. This is industry-led rather than government-imposed. There’s lots of great work being done and we need to start talking about it.”

So what’s next for the demonstration farm? According to Liz Ford, senior agri-projects manager at ABP, it will now broaden its horizons to consider wider farm management and the resulting impact on efficiencies and environmental benefits.

Working with a range of research partners including Harper Adams University, it will examine different grass mixes and pasture management techniques, as well as innovative products like food additives designed to reduce emissions.

“We are working towards 'net zero' farming while balancing productivity, economics and environmental sustainability,” Ford said.

This will involve carbon sequestration in the soil, methane mitigation and decision support tools which can be rolled out across the industry.

We want to create a blueprint for the whole beef sector.”

There are 14,000 beef and sheep farms across the UK working with ABP.