‘Agriculture is going full throttle; yet emissions remain the same’ – US scientist

Agriculture is going "full throttle" across the globe, yet the sector's greenhouse gas (GHG) emissions remain at pre-Covid-19 levels, it has been stated.

This is the view of Dr. Frank Mitloehner, a professor and air-quality specialist based at the Department of Animal Science in UC Davis, in the US.

His perspective - shared during a recent FarmLand interview (full video below) - comes against a backdrop of widespread discussion on how shutting down of the world's largest industrial economies, to stem the spread of the highly-infectious coronavirus, is impacting on overall GHG emissions.

Speaking from his stateside home, Dr. Mitloehner - whose work has informed national and international carbon policy in Australia, South Africa, Paraquay, South America and China and beyond - outlined what is currently happening with the planet's emissions; whilst also highlighting where agriculture's carbon footprint now fits.

He began by referencing recent NASA (National Aeronautics and Space Administration) and European Space Agency (ESA) pollution monitoring satellite reports (see below) that have detected significant decreases in nitrogen dioxide (NO2) over China. 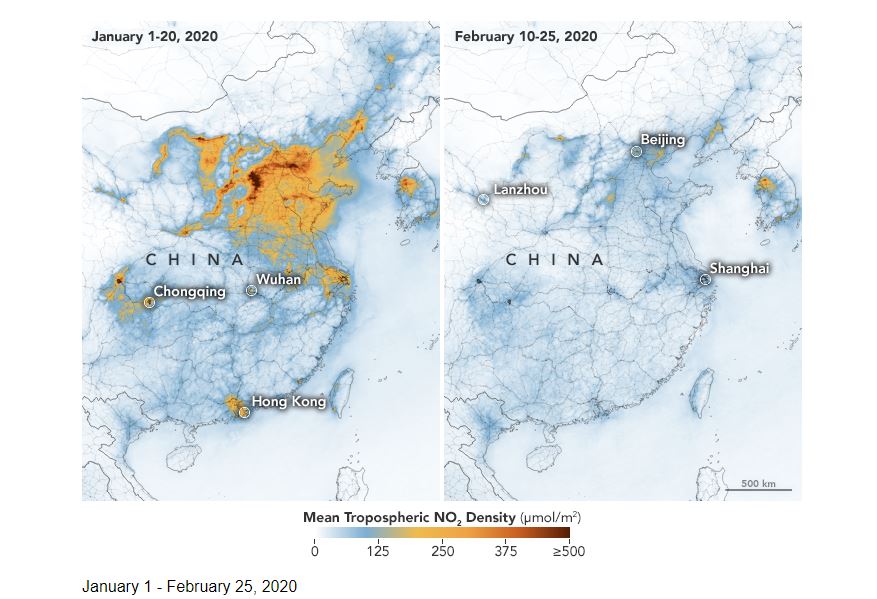 Dr. Mitloehner said: "Many farmers see the satellite images that are going around the world on social media right now of northern Italy and China, before and after the crisis hit.

"And what’s very clear is that many air pollutants have gone drastically down.

"But the emissions that have gone down are mainly associated with the use of fossil fuel – the burning of oil, coal and gas.

"So what’s going down are oxides of nitrogen and other gases, such as volatile organic compounds. That's happening because their related activities have reduced drastically – there is much less vehicle traffic on the streets, much fewer planes and air traffic in the skies," he said.

Although much global economic activity has effectively ground to a halt to protect society from the clutches of the deadly contagion, agricultural activity has persevered to bolster food security, at home and abroad, during the pandemic.

"Agriculture overall is pretty much maintaining its emissions levels because all the activities are maintained.

"It’s not as if Irish farmers, or our farmers here in California, are doing half as much as before - we’re going full throttle and as a result our emissions are the same as they were before the pandemic broke.

"So while overall emissions are going down from all of those sectors of society that have always used fossil fuel and large amounts of it, agriculture is pretty much the same," he said.

However, similar emission trends have been noted in the recent past.

In 2009, in the midst of the global economic recession, worldwide emissions dropped by 1.3%, according to the Global Carbon Project (a recognised international group of climate scientists). However, emissions strongly rebounded by 5% in 2010 as growth emerged from economies, such as China and India.

Therefore, Dr. Mitloehner doesn't expect the current drop in emissions to have any lasting effect; or impact on current carbon reduction policies at Government level.

"I don’t think there is any question that the effects that we are seeing now will be very short-term in nature - unless the pandemic really stays with us for years, which currently is not what most experts predict.

"The reductions that we have seen so far will be compensated by increased activities after we are let out of our houses again - and maybe even more so, as people compensate for what they didn’t do over the last number of months."

However, the professor is of the view that attitudes towards agricultural (methane) emissions at local, regional, national and international level will change - as will the general public's respect towards food production.

"Agriculture plays a really important role in and around greenhouse gases; and I think that role is often times not appreciated.

"Agriculture is not just a source, but agriculture is also a significant sink of greenhouse gases. Grazing land sequesters a lot of carbon and this happens instantaneously.

A forest that you plant today will take years to sequester carbon. We need impacts now - not in 10, 20 and 30 years.

"Farmers need to get appreciation of the sequestration of carbon that they are currently already conducting," he said.

He noted the food shortages he has observed at his local supermarkets in California - a situation that he says emphasises the importance of food security for local consumers.

"California is the agricultural powerhouse of the US, but I now go into the supermarket and all of a sudden I see there are food shortages – there are certain food items that you just don’t get anymore.

"So people need to be careful of what they're messing with when they're attacking agricultural practices; or proposing to replace agriculture with other forms of land use.

"We need farming. Farming is the most strategically important sector of our society – next to the health sector. We need to foster it and support it in every way we can," he concluded.