Detectives in England are appealing for witnesses to come forward after an ATM cashpoint in a small town was ripped from its building using a stolen telehandler.

At 4:09am on Saturday morning, August 18, Dorset Police received multiple reports that criminals were stealing a cashpoint from Fleet Street in Beaminster, Dorset.

The offenders used a stolen green telehandler to extract the cashpoint from the wall of the premises which was previously a HSBC bank and is now a furniture store.

They were seen to initially make off on foot, before getting into a dark-coloured Audi car nearby and leaving the scene, according to police reports.

It is not yet known if any money was stolen, according to a statement made by Dorset Police.

Our hole in the wall just got bigger. #beaminster#dorset#cashpoint#robbery pic.twitter.com/sANB7St1fW 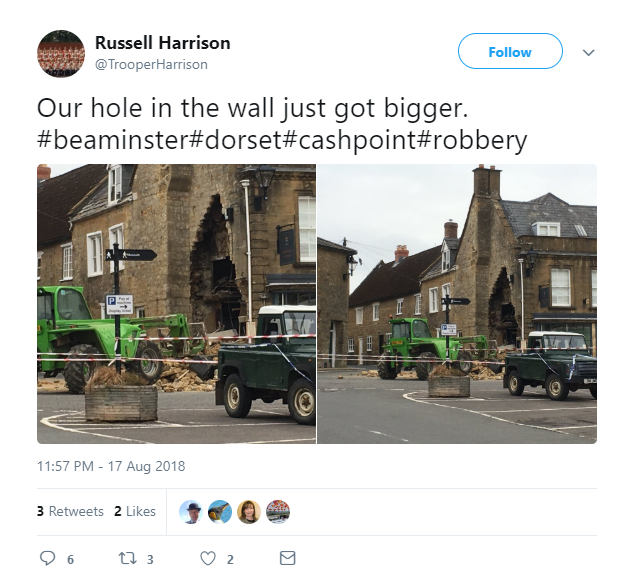 The telehandler - a Merlo - was left at the scene alongside a green Land Rover Defender, which had been stolen by the offenders from Whitcombe Road in Beaminster.

The offenders caused significant structural damage to the property, according to the police.

One occupant who was in the flat above the shop at the time escaped uninjured.

Detective Sergeant Simon Austin, of Weymouth CID, said: “A full investigation is underway to identify the offenders involved in this incident.

“I would urge anyone who saw or heard anything suspicious in the early hours of this morning in Beaminster and has yet to speak to officers to please contact Dorset Police.

The offenders have caused significant structural damage to the property and the road has been closed to ensure the safety of members of the public until it can be made safe.

“Officers from the local neighbourhood policing team will be continuing their patrols of the area and can be approached with any concerns and issues.”

Anyone with information is asked to contact Dorset Police; details can be found on the police website.