Home » Beef » Do you know the ideal condition score for autumn calvers?

Do you know the ideal condition score for autumn calvers?

With 20% of Irish suckler farms calving in autumn, these farmers should be preparing for new calves to arrive from August onwards.

But do farmers realise the importance of the condition score of the cow around calving and how to determine the scale?

Cows should ideally be in condition score of three to three and a half at the time of calving according to Darryl Boyd of the Department of Agriculture, Environment and Rural Affairs, Northern Ireland (DAERA).

They must be monitored to ensure they don’t become over conditioned as this will cause an increase in pelvic fat deposition and associated calving difficulties.

“To control condition many farmers graze these cattle on poorer and older swards or use them to clean out fields or paddocks after young stock.

“Any attempt to reduce condition should be done earlier than six weeks before calving. The last six weeks of pregnancy is critical for successful calving and cows require good nutrition during this period,” said Boyd.

If the body condition score is less than 2.0 there will be a slower return to breeding and the cow will be weaker at calving and will produce poorer colostrum.

On the other hand if it is higher than 3.0 the cow will have greater difficulty calving and re-breeding could be delayed.

The body condition score estimates the cover of flesh on the ‘frame’ of the animal. The range goes from 0 (emaciated) to 5 (grossly over-fat).

Body condition scoring provides an excellent guideline for feeding suckler cows at various stages of the production cycle according to Teagasc. 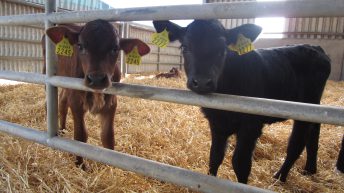 Calving this spring? Some great advice on farm safety around calving cows