Balmoral Show to grow 10% this year 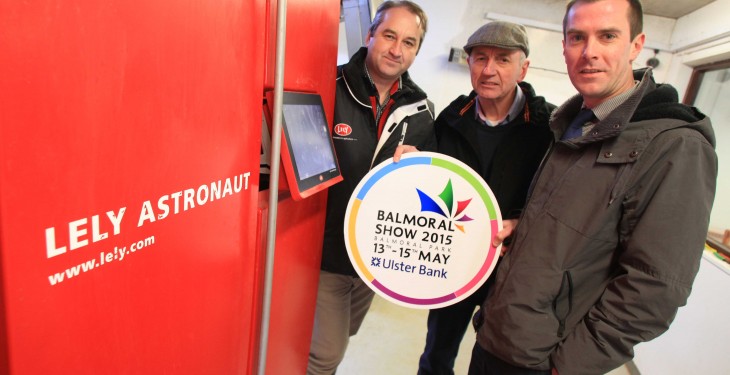 “This figure encompasses all the activities taking place at this year’s event,” he said.

McDonald made these comments while attending the official launch of Balmoral Show 2015.

From a production agriculture perspective, the key attraction will be a working demonstration of a Lely milking robotic throughout the three days of the event.

“A group of 40 cows will be provided by the Drayne family from Lisburn in Co. Antrim,” said Lely’s Tomas Cooney.

“The cows in question are averaging 8,000L per annum. This will be a repeat of the demonstrations that we have hosted at the last 2 Irish Ploughing Championships.”

Ulster Bank is the named sponsor of Balmoral 2015.

“We have £1.5bn to lend to businesses in Northern Ireland this year,” said the bank’s regional director Andy Mills.

“And we want to ensure that agriculture secures its fair share of this funding.”

The bank’s Agricultural Manager for Northern Ireland Cormac McKervey confirmed  that milk producers must sit down and compile accurate cash flow forecasts for their businesses covering the next 12 months.

“The next few months will prove challenging for the dairy sector,” he said.

“The devaluation of the euro against Sterling has served to cancel out the gains that farmers in Northern Ireland might have expected to secure from the recent tightening in world milk supplies.

“Sterling is up 18% year-on-year, which a big disadvantage for processors here trying to compete with product from the Republic of Ireland.

“So, there is no real evidence to indicate that farmgate milk prices will increase to any great extent here in Northern Ireland for the coming months. This is why it is so important for dairy farmers to develop accurate cash flows, certainly through until the end of 2015. Armed with this information producers can then sit down and discuss their finance requirements.”

Balmoral Show will take place between Wednesday May 13 and Friday May 15 2015, The venue is Balmoral Park, located on the outskirts of Lisburn.