Home » Beef » Blue 1, 2 at the RUAS Beef and Lamb Championships

Blue 1, 2 at the RUAS Beef and Lamb Championships 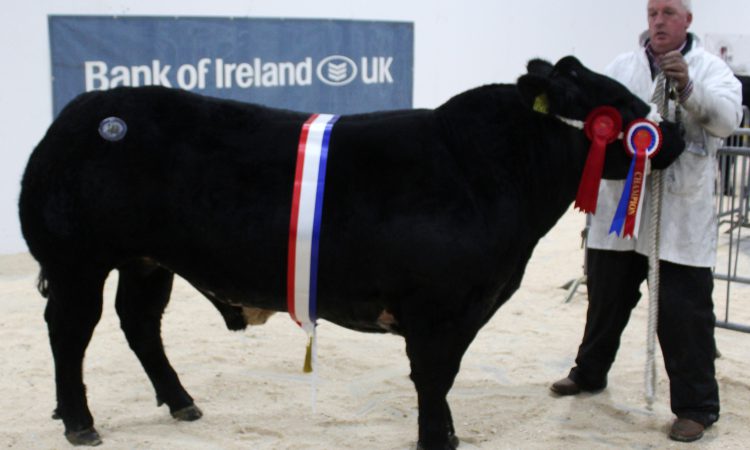 He stormed the field with an immense British Blue-cross steer. The Bready man takes up the story:

I bought him as a calf for £900 at the rising stars’ sale in Dungannon back in February of this year. He weighed 320kg at the time.

“I housed him immediately, and he hasn’t stopped eating meal since.”

According to Alan, the steer weighed 758kg on the day of the show and sale.

“I had never won an Interbreed Championship at Balmoral up to this point. It is a great honour for me to have secured a life time’s ambition this year,” he said.

The Interbreed Reserve was a choice Blue-cross heifer, exhibited by Dermott Small and Blair Duffton, from Kilkeel in Co Down. However, roles were reversed in the sale ring with the heifer making £9,200 – the top price of the day. The steer was sold for £6,100.

“The quality of stock entered for all the classes was exceptional. They would grace any livestock event,” he commented.

Several top prices were paid at the sale. These included £7,000 for the breeding heifer champion, exhibited by James Alexander, from Randalstown.

She went on to make £5,000 in the sale ring. The Housewife’s Reserve, an Aberdeen Angus / Charolais cross heifer, exhibited by Jack Smyth from Newtownstewart in Co. Tyrone, sold for £2,400.

The Reserve Opposite Sex to the Houswife’s Choice was a Blue-cross steer, exhibited by Ian McCaughern, from Ballymena. It made £1,900 in the sale ring.

The Native Breeds’ Championship was won by Richard Law from Ballinamallard, Co. Fermanagh, with an Aberdeen Angus/Blue heifer. Weighing 620kg, she went on to make £2,700 in the sale ring.

Competition in the calf ring at the RUAS was also intense. The champion – an April-born Limousin – was exhibited by Michelle Wright from Ballymena. It sold for £4,000.

The reserve calf champion was a Blonde cross heifer, shown by Pat Hackett from Clogher in Co Tyrone. It made £3,100 in the sale ring.