In this week's Buildings Focus, AgriLand made the trip to just outside Dungannon in Co. Tyrone to see a brand new slatted sheep unit on the farm of Sam and Stephen Thompson.

The father-and-son team run a flock of 300 ewes (Suffolk and Texel-cross mules) and also keep 80 beef cattle on 120ac of both owned and rented ground.

Up until last year, the duo were lambing their ewes in a dry shed, which, really and truly, they had outgrown. As well as that, it was only able to accommodate about 150 ewes, so Stephen decided to put a project he had in his mind for a long time into action.

Speaking to AgriLand, Sam Thomspon said: "My son, Stephen had this project in mind for a long time. We had really just outgrown our old housing facilities in which the ewes were bedded with straw.

The old housing facility was too small for the number of ewes we were carrying and, come lambing time, it used to create a lot of problems for us.

"We looked at other sheep housing facilities through our business development group and we took a few really good ideas from different sheds on other farms and went from there and ended up with what we have here today." 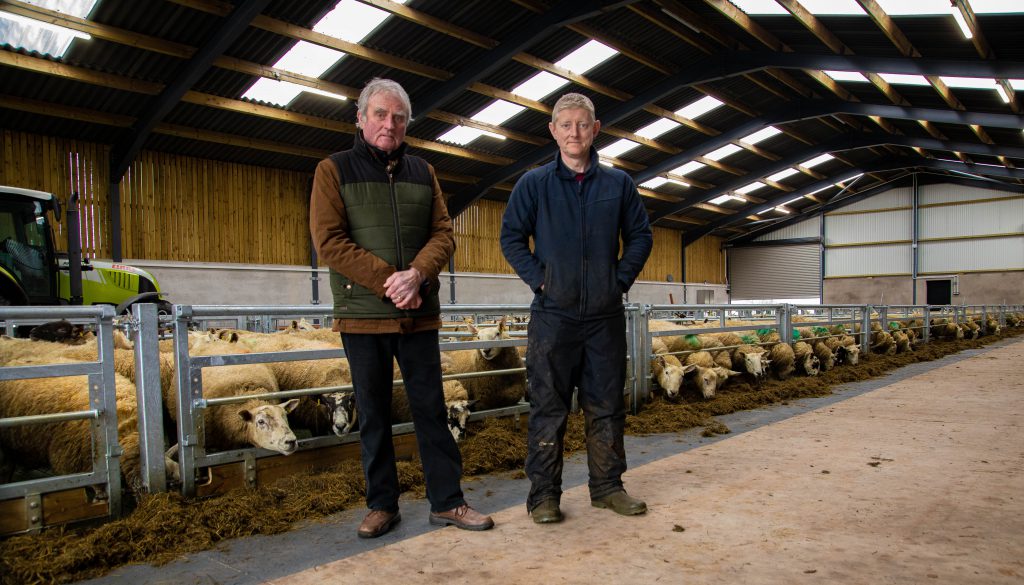 The new slatted unit was designed by Niall Hudson of Hudson Architecture Limited. Sam and Stephen also got some help from their local beef and sheep advisor, Brian Hanthorn, who offered them advice on the layout of the pens.

Work began on the project this time last year (January 2020) and everything - bar the setting up of individual pens - was completed in December gone by.

The concrete work, including the tank, and the steel frame of the shed was carried out and erected by JDQ Contract Services, while the entire inside of the unit - including the slats, feeding barriers, gates and drinkers - was undertaken by Oddball Engineering.

Taking a look at the unit in more detail, it is 36m long and 18.3m wide and stands 7.6m to the apex and 4.1m high to the eve gutters. The shed spans eight bays, with two feeding passageways at either side of the slatted pens. 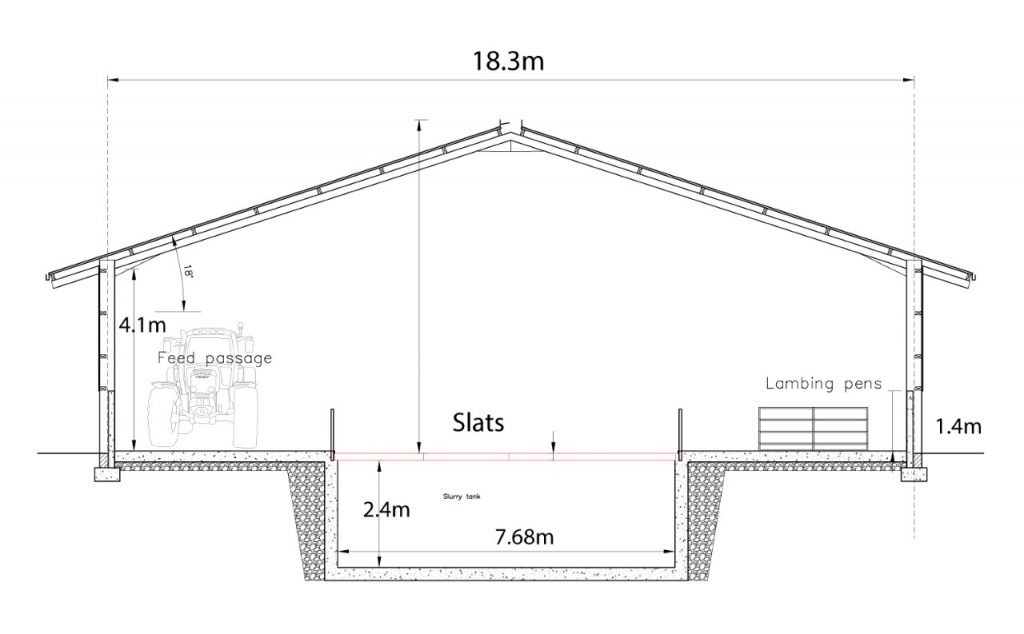 At either end of the shed, in between the concrete wall and the slatted pen is a small - 1m wide - walkway that allows the Thompsons to go from one side of the shed to the other without having to go outside and in around the other door.

In terms of entry and exit points, four roller doors were incorporated into the design. There are two at either end of each concrete passageway. Both passageways are 5.3m wide. There are also two small doors, one at each end as well which leads into the small 1m wide walkway between the two feeding passageways.

With lambing fast approaching for the Thompsons, 32 (1.5m X 1.5m) lambing pens were set up in the shed. There are 16 on each side going along by the wall of the feeding passageway. 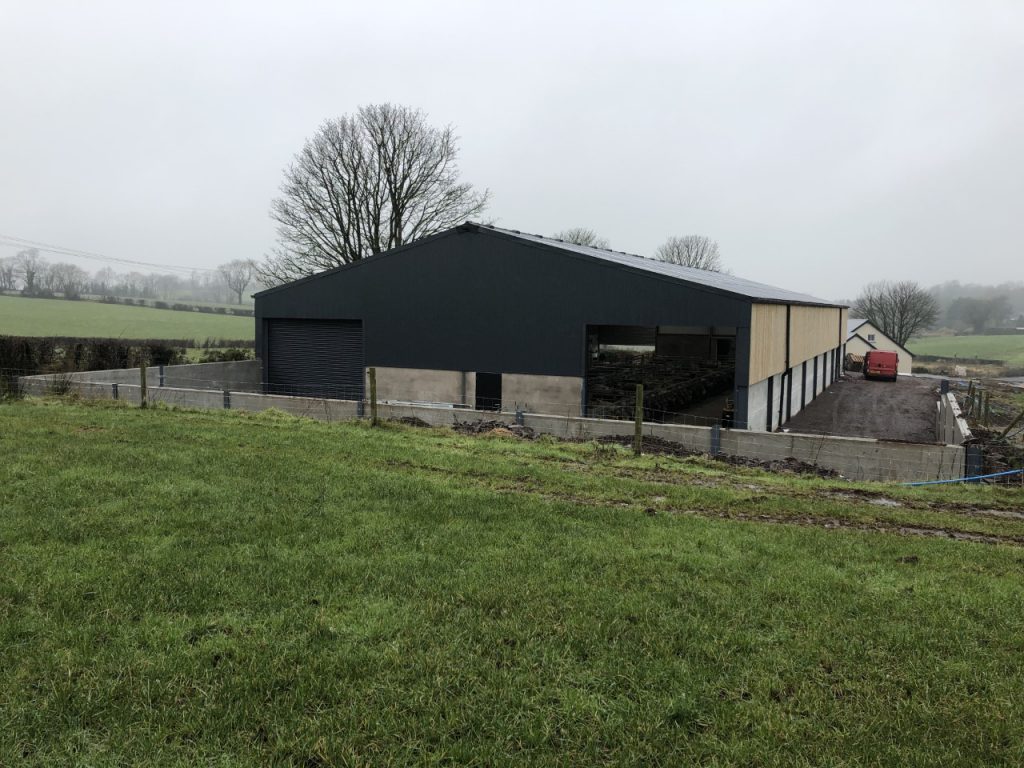 It's an eye-catching shed that is not commonly seen on sheep farms. Space was a major issue for the Thompsons in their old housing unit, so they made sure to avoid this problem this time around.

At the moment, there are 300 ewes in the shed, with 30 ewes on average in each pen; however, Sam said that if they wanted, they could probably fit another 30-40 if they desired to.

As the Thompsons scanned last month, all the ewes are grouped according to the number of lambs they are carrying and they have been started on meal. 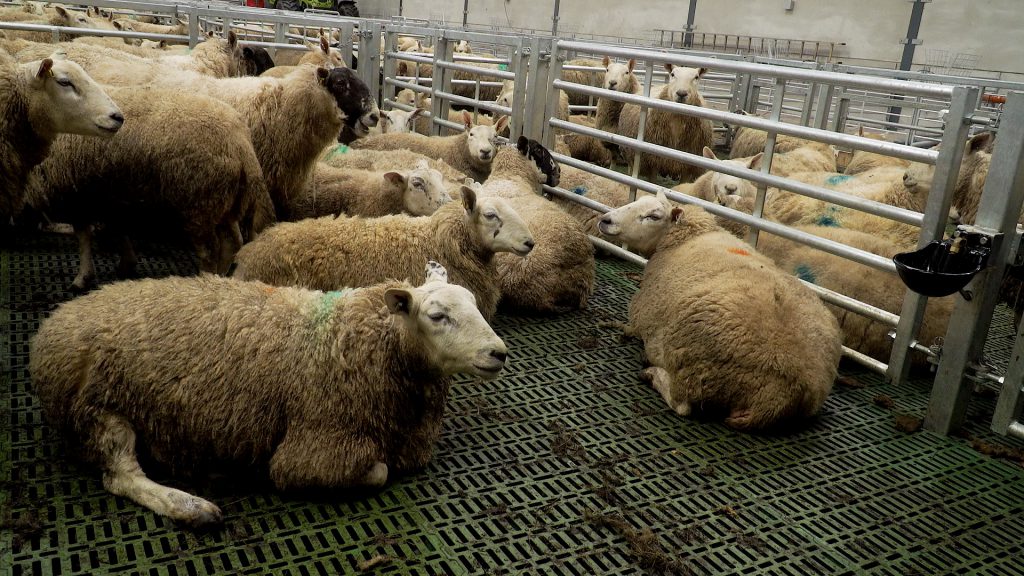 A big feature of the shed, which sets it apart from most sheep units, is the incorporation of plastic slats. Sam spoke about the hardship and costs associated with bedding ewes with straw and that they were keen to move away from it.

He said: "The plastic slats offer a number of advantages, such as the animals are cleaner compared to being housed on straw and we are seeing fewer cases of lameness compared to the straw bedded shed.

"When you would be feeding ewes silage and if it was a bit wet it was nearly impossible to keep them clean on straw bedding.

We are also reducing our straw costs as well. We will only need straw for the individual pens. As well as that, we put in an 8ft tank, so slurry storage won't be an issue.

"The only thing we were finding was that the ewes were pulling in a good bit of the silage and clogging up the slats; however, since we started using the diet feeder, we have been able to chop the silage up more and less of it is being pulled into the slats thankfully.

"The ewes seem very happy and comfy on the slats and we are happy we decided to go ahead and put them in." 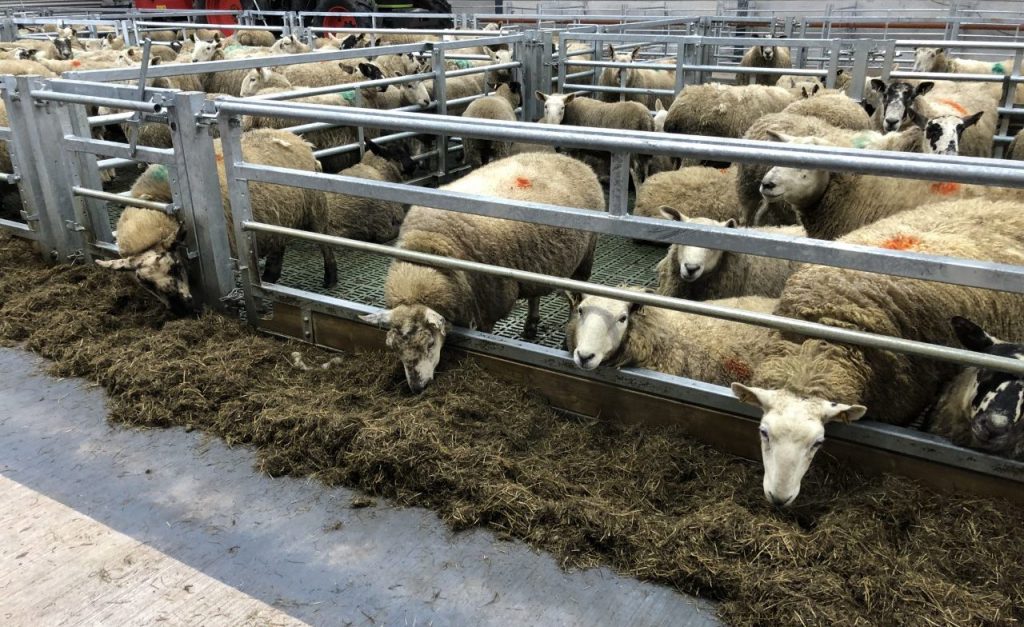 The task of handling ewes or moving ewes between pens is also made much easier for the Thompsons as all of the gates are interchangeable within the pens.

As well as that, there are small exit gates in each of the pens leading out to the feed passageway, which makes it handy to move ewes out to the individual pens come lambing time or just to go in and walk through the ewes.

Small drinkers - one in each pen - were installed and a drinking system for the individual pens was just nearing completion as well at the time of the visit.

Furthermore, the feeding barriers can be adjusted to different levels. As well as that, a drop-down bar is also part of the design of the feed barriers and is handy when ewes and their lambs are grouped into the slatted pens - which will help prevent lambs from getting out of the pens. 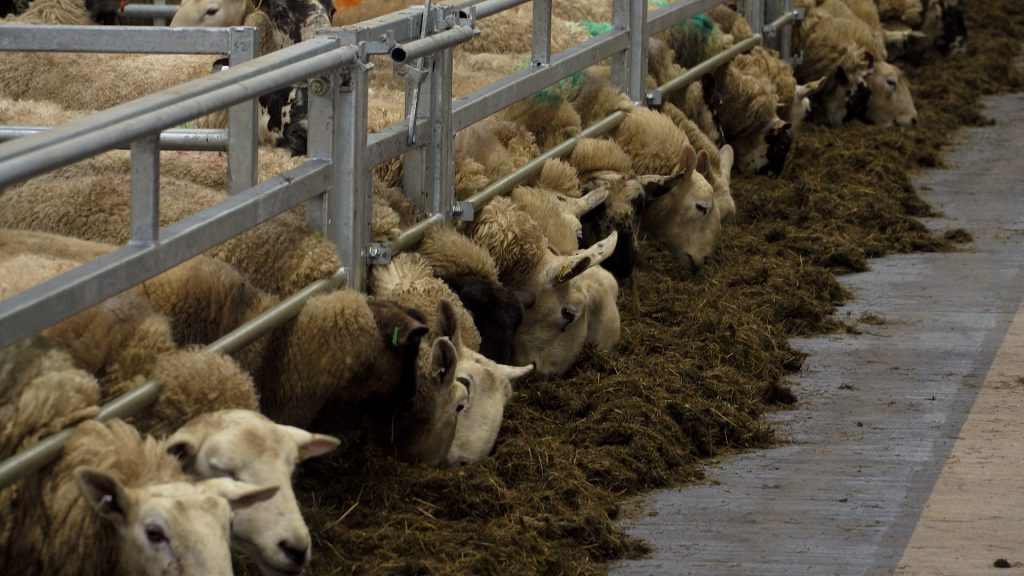 A big element of any new build is ventilation and due to the sheer number of animals in the shed, it was imperative to get right for the Thompsons.

The high-pitched roof along with the Yorkshire boarding allows for excellent circulation of air and if it did happen that the shed became stuffy, there are four roller-doors that can be opened up to increase the airflow within the shed.

There are also clear roof lights incorporated into the design (16 in total) which help to brighten up the shed significantly.

Sam added: "We installed two layers of Yorkshire boarding. This is due to the positioning of the lambing pens in the shed.

We thought with only one layer of boarding, the lambing pens would be open to getting wet, so we installed two layers to prevent as little rain as possible from getting in, while at the same time ensuring enough air is coming into the shed.

"The high-pitched roof is also a help, especially as there are so many ewes in one space. Low-pitched roofs can lead to the shed becoming stuffy and warm, which is what we wanted to avoid." 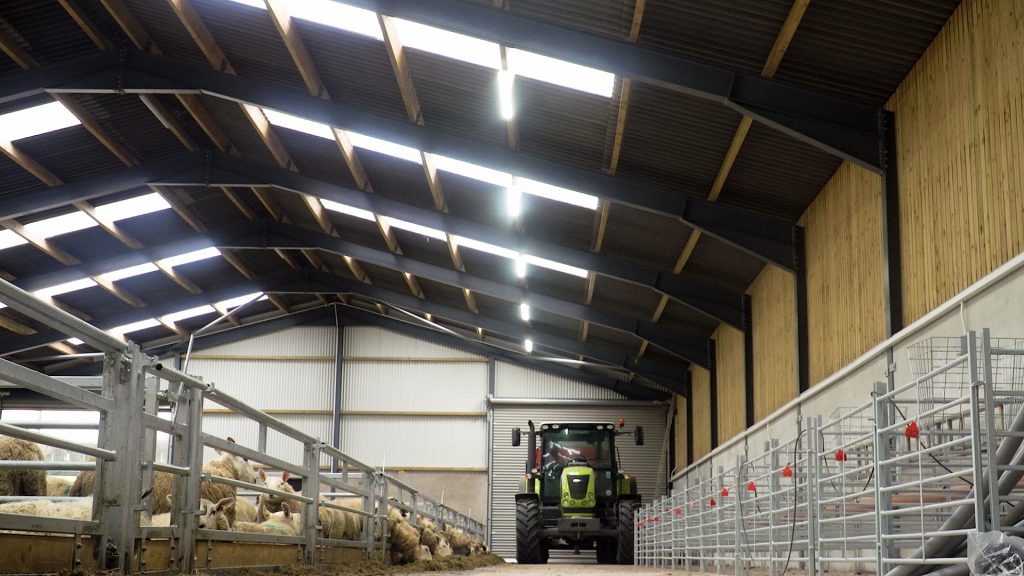 The new housing facility was a sizeable investment and the overall cost of the slatted unit amounted to €120,000 (excluding VAT).

Speaking about the new unit, Sam concluded by saying: "I don't think there is anything we would change about the building, which is not always the case when you put up a new shed.

Now, in saying that, we have only been using it for a month, so by the time we have the lambing season over, we might be saying we should have done something differently, but as of now, we are very happy with it.

"It's a building that will hopefully be here for a long time to come. Stephen's sons have a great interest in farming as well so they will be able to enjoy it as well." 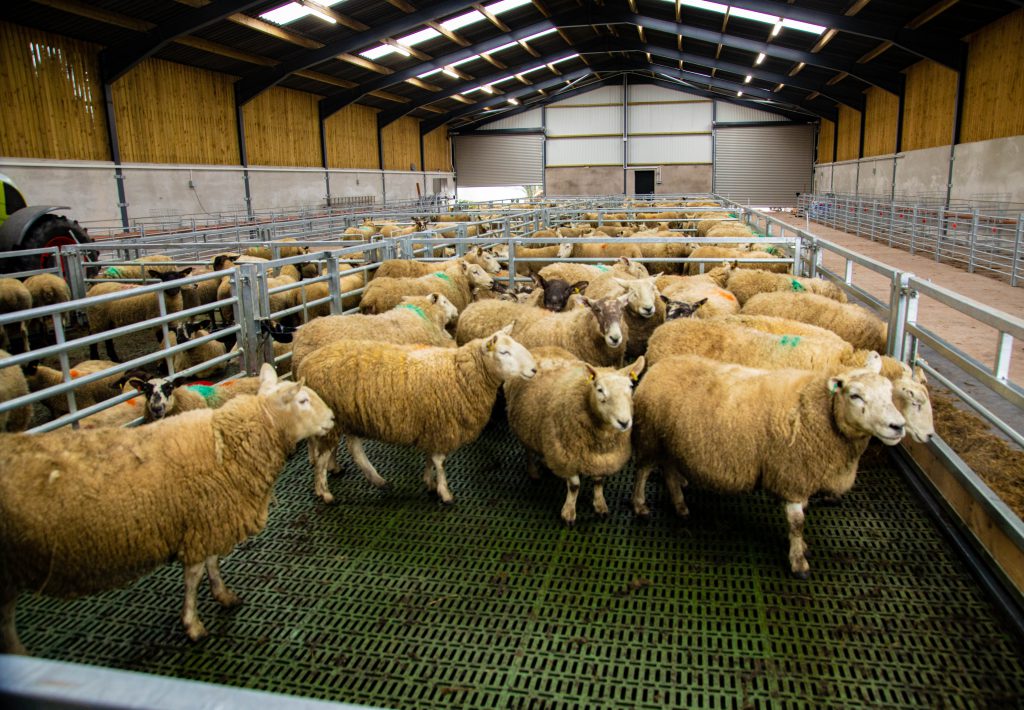