Home » Rural Life » ‘Carry on designing kitchens or take over managing the farm?’

‘Carry on designing kitchens or take over managing the farm?’ 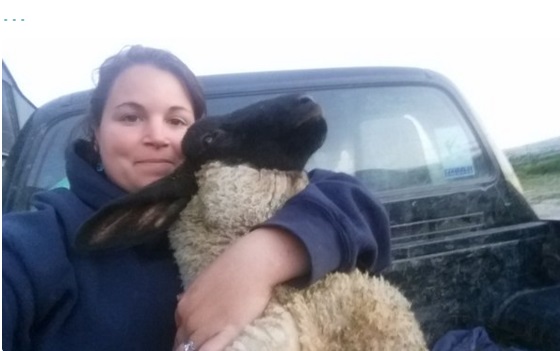 Some 13% of farms in Ireland are owned by women and with today, March 8, being International Women’s Day to mark it, we caught up with one sheep farmer in Co. Wicklow.

Only 13% of the 111,134 farmers who claimed the Single Farm Payment in 2014 were women, figures from the Department of Agriculture show.

Some 15 months ago Leonie Byrne went from working nine to five as a kitchen designer to becoming a sheep farmer with 260 ewes.

Originally from south Dublin, where she was a 40 minute walk from Stephen’s Green, Leonie now lives in Carnew, Co. Wicklow with her husband and son.

After the economic downturn in 2008, Leonie’s husband Stephen, an electrician, found himself out of work so he did the Green Cert and went back into farming.

Electrician work came back calling for him over a year ago which left Leonie with a decision to make – continue on kitchen designing or take over managing the farm.

She chose the latter and speaking to Agriland said that it’s been a steep learning curve.

It’s incredibly physical but it’s an honest way of living; your’re not trying to sell something over-priced to someone.

This is Byrne’s second lambing season and she says that it’s going well.

Byrne says that there are a awful lot of women out there who wouldn’t say that they’re farmers even though they sometimes do as much work as their husbands.

“You do get looked at [if you’re at the mart] and it’s almost like woah, it’s a woman.”

However, she says that her neighbours are supportive and helpful.

“If I was here alone and I needed a hand with something there are a number of people I could call on.”

Byrne says she would encourage young women to get into farming, it’s hard work but you see what you put into it.

A big focus for Byrne is mental health and she appeared on Ear to the Ground last year speaking about her battle with post-natal depression.

“I had been on Ireland’s Farmers last year and while I was on it it was mental health day, so I tweeted about my post-natal depression.

“Farming is very lonely and it’s important to reach out to people.”

A day of marking and separating pic.twitter.com/GwLILHRSlX

For now, Byrne and her family have no plans to expand the farm and says that if they were to, they’d need more land and sheds.

“To get more sheep we’d need to expand, so we haven’t decided what we’ll do next year just yet.”