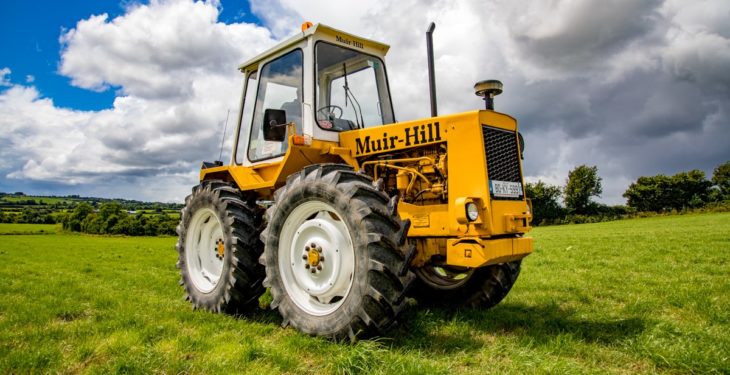 Matt Treacy runs a garage in Garrynoe, Ballingarry, Co. Tipperary. He repairs and restores tractors, machinery and all manner of vehicles – including vintage and classic items.

Among the many items to pass through his workshop was this Muir-Hill 121 (below) – a Ford-based classic that oozes presence, despite its considerable age.

The tractor came into Treacy’s ownership about nine years ago; he had been on the lookout for such a machine for several years before that.

AgriLand caught up with Treacy this week to find out more about this intriguing tractor.

I had never even driven one before I bought this 121. I had only seen them, but I was always keen to actually get one – one that would be suitable for doing up and restoring.

What jobs needed doing to the tractor?

I bought one that needed a lot of work. The engine was tired; the steering didn’t work; the hydraulics were noisy – when they did work! The wiring was also in a bad state in places; some of it was corroded and had perished away.

Originally, I was just going to do up the head on the Ford engine – and replace the water pump. Once I got stuck into it, I decided to give it a full overhaul.

I also had to replace a lot of hydraulic seals and get to the bottom of plenty of oil leaks, which were dotted about the machine.

New rods and links – belonging to the power steering system – were also needed. When I first got the tractor, you could hardly turn the wheel. Now you can spin it around with your little finger.

The tractor needed work on the cab as well. Inside, I had to get new clocks [gauges/dials] and cables. The cab also needed some new glass; it even needed a whole new back window frame and [sliding] door.

The work was done on and off, in between other jobs. I didn’t get it all finished until four years ago. And it might not be all done yet! I still would like to replace one of the tyres.

Had you any difficulties sourcing all the parts you needed?

I had to get some parts from Richard Lloyd in the UK; some other components were easier to get. In some cases, off-the-shelf [original or salvaged] parts were too expensive. For example, I ended up fabricating a new door and some pieces for the cab; it worked out cheaper – and everything fitted 100%.

Are you planning to keep or sell the tractor?

It’s up for sale at the moment, though I’m in no panic to sell it. I’ve had it for nine years and I’m ready to move on to new projects. There’s plenty to keep me busy; there are three single-chop Taarup silage harvesters being restored at the moment, along with a precision-chop JF.

There’s also an Ursus 385 in the shed; I finished doing that up more recently. So, if someone makes me a reasonable offer, I’ll let the Muir-Hill go – but only at the right money; I’ve already put thousands into it. Sometimes, I think working at these tractors is like an addiction; but it’s not the worst addiction to have!

So; where did Muir-Hill tractors come from? According to the ‘official’ Muir-Hill website, the origins of the business can be traced back to the 1920s, when Mr. Muir and – you’ve guessed it – Mr. Hill joined to form Muir-Hill Service Equipment.

Back then, the company produced rail locomotives. These were narrow-gauge machines; they were based on Fordson tractor skid units.

A decade later, the company was bought out by E. Boydell and Co Ltd. Thereafter, it abandoned locomotive production; instead, it embarked on the manufacture of construction equipment. Again, many of these machines were based around Fordson skid units.

The 2WL loading shovel was introduced in 1954, followed by a further change in ownership – to Winget Ltd of Kent – five years later.

The late 1960s saw the development of seven new models of loading shovels and another change of ownership and, significantly, a change of name. The business then traded under the brand ‘Muir-Hill’ – the name that has become so familiar to fans of the marque.

Matching trailed dumpers were also offered. 13t and 20t units were intended for use with either the 101 or 110 tractors. A larger 25t dumper – a very capacious unit at the time – was designed to be coupled to the 161.

Series III tractors arrived in 1978, including a new model designation – the 141. These units were offered with either Ford or Perkins engines; they also came with improved creature comforts – such as a large, more spacious cab with better sound-proofing.

By the 1980s, major tractor manufacturers – such as Ford – were producing tractors with their own factory-fitted 4WD systems in ever-increasing numbers. This presented a major challenge for specialist conversion firms like Muir-Hill – a challenge that was ultimately insurmoutable.

In 1991, Lloyd Loaders Ltd of Yorkshire (England) acquired the remnants of Muir-Hill from Aveling Barford.

Though long since out of production now, Muir-Hill tractors still attract plenty of attention at shows and road runs. A small number are still gainfully employed, working on farms and even in busy contracting fleets.

The tractors are still uniquely eye-catching. That’s probably because Muir-Hill opted for a no-nonsense approach to styling. The machines have a distinctive boxy look and a utilitarian feel. The equal-sized wheels and high-set cab certainly give them a purposeful stance.

Alas, thanks to a limited steering lock, the tractors are not very manoeuvrable. And, without a beefy implement on the back or a heavy trailer in tow, they can – on occasion – pitch uncomfortably at full pelt on the road.

Nevertheless, these tractors will be fondly remembered by many – not just avid collectors and enthusiasts but by anyone whose curiosity was sparked after first catching a glimpse of an imposing Muir-Hill all those years ago. 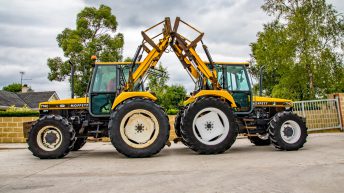 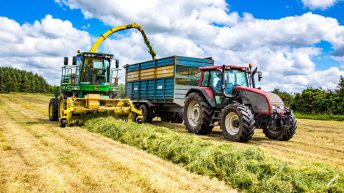