The MB Trac has the distinction of not only being a very well-known machine but also, at the same time, it’s quite rare.

When new, it was considered expensive – usually viewed as a specialist machine suitable, in the main, for large farmers and contractors. Yet, it represents the pinnacle of the ‘universal tractor‘ concept – a machine that could fulfil many roles other than, for example, ploughing.

There are several already in Ireland, which are lovingly tended to by their owners and make an appearance at various events.

Most have been purchased to be kept in a collection. Examples seldom come up for sale – so when Liam Brennan of Tralee placed his on the market it was worth taking a closer look.

During the evolution of the agricultural tractor there were two distinct trains of thought on how they should function on farms.

The ‘Anglo-American’ notion was that the tractor was a straight replacement for the horse and, so, pulling a plough was the overriding concern. Over on the continent, they were seen as potentially multi-purpose machines – designed to serve a less extensive type of agriculture without as strong a focus on cereal crops.

The continental ethos led to the appearance of a variety of ‘tool frame’ and ‘transport carrier’ type machines; these met a steady if not overwhelming demand from growers.

As it was, a good number of ‘standard’ continental tractors were already available – in either agricultural or road transport specification. They tended to accommodate mid-mounted implements with forward-facing PTOs – features which blunted the advantages of the often under-powered ‘frame-type’ machines.

It was into this market that Mercedes-Benz launched the 25hp Unimog in 1946, having been casting around for a new civilian product in post-war Germany. That machine became the epitome of the universal tractor.

The Unimog sold reasonably well in Germany but there were two major problems holding sales back further afield. The first was that rear-mounted implements sat a long way behind the driver (and were hidden by the load-carrying space). The second concerned the question of taxation.

In many countries the Unimog was considered a truck rather than a tractor; it therefore attracted higher rates of purchase tax and/or fuel duty. To address these issues, the engineers at the Gaggenau factory drew up plans for a new tractor based on the Unimog’s major components.

Alas, the idea was not popular with the company’s management, resulting in its delayed development.

It took the discovery that Deutz-Fahr was secretly working on something similar (the Intrac) to fully re-activate the programme – resulting in the novel MB Trac 70 appearing in late 1972.

The first model produced just 65hp; it was given a larger engine three years later. This new 3.8L unit was further boosted by a turbocharger in 1981 and then installed in the 85hp MB Trac 900 Turbo (which stayed in production until 1987).

These were the years that saw a rapid intensification of tillage farming and the 900 Turbo was a popular machine to mount a sprayer or fertiliser spreader on – despite its rather fierce cost. They were rarely used to pull cultivation equipment in the UK.

Despite their cost, they were relatively low-powered machines; they were gradually displaced by larger trailed and purpose-built self-propelled sprayers. This left many MB Tracs standing idle – for there was not a lot else that could be done with them in the Anglo-American farming environment.

Even on the continent there was only sufficient demand for production to last until 1991, culminating in the 180hp MB Trac 1800. This was three times the power of the original; yet it remained true to the principles of the first machine – with its solid rear axle, coil suspension at the front and an overall emphasis on versatility.

Liam Brennan always had an interest in tractors; his family has a small cattle farm in Co. Kerry (Tralee). He had never really thought about restoring one for the pleasure of doing so. That all changed, however, when his employer turned up in the yard with a lorry-load of rather tired MB Tracs, which he had brought in from the UK.

Liam was intrigued; it didn’t take long for one of them – an MB Trac 900 Turbo – to find its way back to the home workshop where the process of restoration began.

Three-and-a-half years later the tractor is now finished and is back in full working order – with replacement panels and a smart new coat of paint. The problem with many MB Tracs on spraying duties was that, as the booms were folded, excess chemical would drip down on to the back of the cab – and simply eat the steel away.

The same applies to the mudguards; these are rarely in good shape on older examples.

Liam has also undertaken some extensive refurbishment on the bonnet side panels, along with making up a new radiator grill to match the old one.

Thankfully, the frame itself is not prone to much corrosion; it was still in sound shape underneath its tired paint. This was stripped off and a new coat applied – a task greatly facilitated by the cab hinging right back onto the rear of the chassis (avoiding the hassle of having to remove it completely).

Having a workshop kitted out to service the needs of his father’s haulage business was also a great help in restoring a vehicle that still retains many features of a truck, despite the designers trying to hide that fact.

Mechanically, little work was required on the tractor; a good, all-round service and some new seals in the hubs being all that was needed. This is a Mercedes after all.

Now that it is finished Liam is looking to make room for the next project, which is likely to be another MB Trac.

His present 1985 example of the 900 Turbo is now for sale; Liam has a figure of €14,000 in mind. Bearing in mind that this vehicle has the potential to be more than just a ‘show piece’ – it could be put to useful work tomorrow – it’s likely to find a buyer fairly quickly. 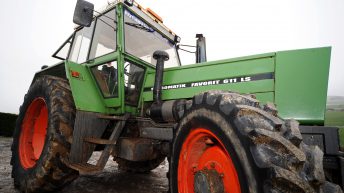 Classic corner: No rest for the wicked; 37-year-old earns its keep 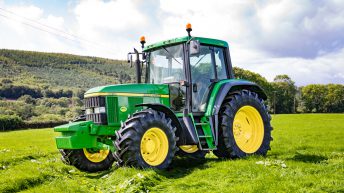 Classic corner: Is this the ultimate modern, working classic tractor?