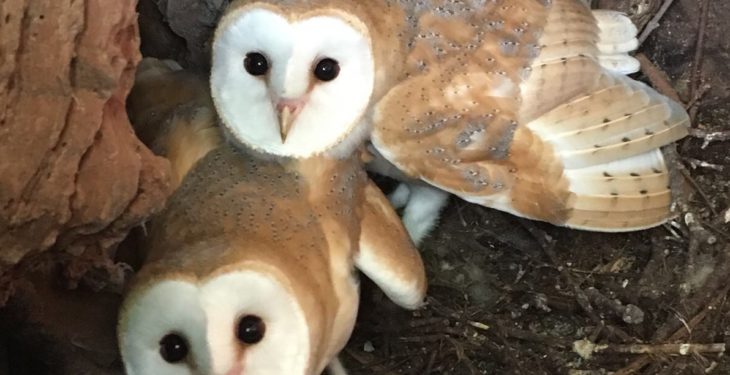 A Co. Down farmer has been helping to rear three barn owl chicks after the adult male was injured on a roadside, and left with a broken wing.

The man who farms in east Down, with a mixed enterprise including cattle, sheep, cereals and a small pig herd, has been providing food for the adult female and her young family for about nine weeks.

While barn owls are said to be rare in Northern Ireland, the farmer, who has asked to remain anonymous, said he had noticed them occasionally over a 30-year-period, when locking cattle into sheds.

“We purchased an out-farm about 20 years ago, and there has been quite a few barn owls on it.

“After owning it for a few years, we noticed a barn owl frequenting a hole in a beech tree, successfully nesting and brooding there. The female seemed to suffer some trauma and died, and we had a male on his own for several years.

“Then last year, we noticed a different younger pair. The female seemed to be breeding in a different tree in the same area. We couldn’t see what was going on, but would occasionally hear a lot of distressed calls from owls,” he said.

This year, he noticed increased activity among barn owls in the beech trees, in the area where they had spotted the first barn owl, close to where they live. “Two owls seemed to be nesting there,” the farmer said.

“Then my son rang to say that he noticed an owl had been injured and was on the road, half a mile away from where they were breeding. We brought it to the vet and were told that it would never fly. It was subsequently brought to an aviary. We were left with the dilemma of the female sitting on eggs, and how she was going to cope.

“She had been fed by the male at night, and never moved far from the hole in the tree. I decided to go and investigate, bringing frozen white mice, small rats and male chickens with me. I left the food outside the tree. When I went up the next night, it had disappeared.

“I continued doing that for a few days, then left my son to look after them while I went on a fortnight’s holidays. He rang to say there were three chicks in the nest.

We continued to leave food at the entrance. We could see that the female, who had been living somewhere else, would arrive at dusk and go in and feed the chicks.

“We could also see that they were all progressing well, and the female started to hunt. They have now left the nest, and are out flying, but are a bit like teenagers – they can put on the pan but they are waiting for their mum to come and feed them.

“Feeding them has cost me a fortune – the mice are £1 each, so it’s not a cheap hobby,” he laughed.

I feel privileged to have them on my land, and felt a responsibility to give them the best chance. They are a protected species, and are vulnerable at breeding time.

“As they fly at night, they are quite secretive, and hard to track down. They are good at keeping rat and mice numbers down, so they are on the farmer’s side.”

Sean Woods, Conservation Advisor with the Royal Society for the Protection of Birds (RSPB), said this is one of many farmers in Co. Down working with RSPB NI, who go above and beyond the call of duty to help wildlife thrive on their land.

“The time, effort and money he put into helping ensure these young barn owls fledged, following the injury of one of the parent birds, clearly demonstrates this,” he said.