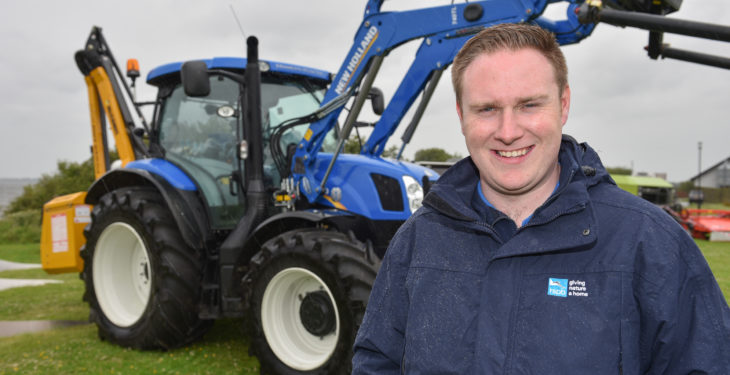 The Royal Society for the Protection of Birds (RSPB) has just appointed Sean Woods as Conservation Advisor to lead the ‘Farming Together with Nature’ project in east Down.

Woods has been working for the RSPB for four years. His previous role entailed working with landowners and other decision-makers for sustainable countryside management in the Lough Neagh and Lough Erne basin.

As the most arable region in Northern Ireland, east Down is regarded as a hotspot for priority seed-eating birds which have suffered massive declines across the UK, due to habitat loss.

The RSPB said the work it is doing alongside local farmers is clearly playing dividends. A recovery project between 2006 and 2011 saw yellowhammer numbers increase by 79% on farms where RSPB NI advised farmers on measures to make their land more wildlife-friendly, without affecting the viability of the farm.

A small team of trained volunteers has recently surveyed local farms on the lookout for all sorts of species, particularly interested in priority birds like the yellowhammer and linnet.

The new farmland advisor will analyse the finding from the surveys and provide them to farmers, giving them advice on steps to help birds and other wildlife on their land.

He can advise on nature-friendly measures, including sowing wild bird cover and leaving grassy field margins to provide an over-wintering site for insects and a commuting route for farmland mammals such as mice and shrews.

The new appointment coincides with the first round of the new Environmental Farming Scheme which sees farmers being subsidised for their contributions towards helping nature on their land.

“I’m very excited to be working on this project with Co. Down farmers to help wildlife within this wonderful landscape,” Woods said.

It’s a vital time to engage with farmers and implement the new Environmental Farming Scheme. Without these payments, farmers have little incentive to invest time and space for nature.

“This is why it is essential that as many farmers as possible utilise the new scheme. In this role I can provide support over the coming year,” he added.

“If every farmer applied a small measure on their land, such as sowing a patch of wild bird cover, it would have a positive effect on the wider countryside and could help reverse declines in wildlife,” said Woods.

The Farming Together with Nature project is now in its fifth year, and is working with more farmers than ever. Woods said he is looking forward to working with new farmers in Co. Down, who are interested in advice on how to help nature on their land.