Home » Sheep » Do you hold the Golden Fleece?

Do you hold the Golden Fleece? 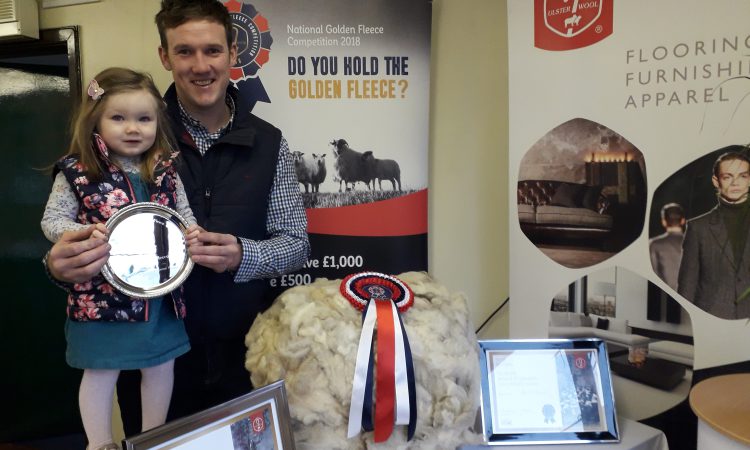 Ulster Wool has launched the 2019 Golden Fleece Competition, designed to showcase the exceptional quality of wool.

Managed by Ulster Wool in association with JG Animal Health, registered producers can enter the competition via the Ulster Wool depot or qualifying fleece competitions held at four agricultural shows in Northern Ireland during 2019.

The competition aims to showcase the exceptional qualities of wool, highlighting the importance of fleece presentation in maximising the value of wool.

Last year’s winning fleece was from the Shetland breed and entered by Lanarkshire sheep farmers Robin and Margaret McEwen-King.

The 2018 Reserve Champion title was awarded to Sam McConnell from Co. Down in Northern Ireland with a Rouge fleece.

Robin and Margaret McEwen-King, last year’s competition winners said: “We were delighted and overwhelmed that we had produced the Champion Golden Fleece for 2018.

We have been farming in Scotland for 26 years and have always had a great interest in producing quality wool. We were very proud to represent Scotland in the final and it was a great honour to receive this award.

Sam said: “Winning the 2017 competition meant a lot to me and also achieving Reserve Champion last year was excellent.

“I’ve been attending shows since I was a child, and my family has always entered competitions and we pride ourselves on producing the highest quality fleeces.”

Judging for the 2019 Golden Fleece competition will take place across two stages, with the eight finalists invited to a presentation ceremony in Bradford during December all receiving a £125 product voucher from JG Animal Health.

“Being selected as one of the best exhibiting fleeces in your country is something to be immensely proud of, but taking home the title of National Golden Fleece Champion really is the ultimate accolade of superb quality wool.”

Competition entry forms are available from the Ulster Wool grading depot. For full competition rules, as well as a list of eligible shows contact Ulster Wool on: [email protected].