Home » Machinery » Electric-drive ‘gearboxes’ for tractors: Where to now?

Electric-drive ‘gearboxes’ for tractors: Where to now? 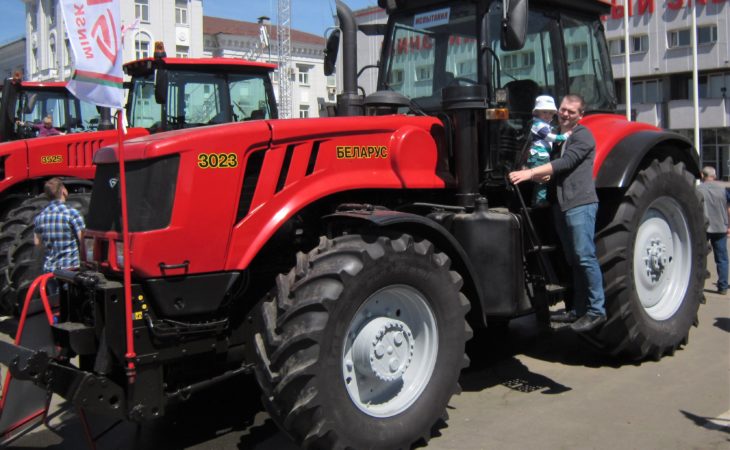 Belarus first unveiled its prototype 3023 tractor almost a decade ago.

Built at the so-called Minsk Tractor Works, the tractor is home to an electro-mechanical (stepless) transmission.

In other words, instead of a ‘conventional’ gearbox (whether a semi-powershift unit or a hydro-mechanical CVT), the tractor’s engine is mated to an electric generator. This generator then powers an electric motor – to drive the tractor’s transaxle.

At the time, the tractor did attract quite a bit of attention; it even received a silver medal at Agritechnica 2009 – Europe’s biggest farm machinery exhibition.

The tractor was developed jointly with Russian entity ‘Ruselprom’ – an established manufacturer of electric equipment.

Though there has been relatively little fanfare since (at least here in western Europe), the 3023 tractor project still exists. It’s likely that we will see more of this drive-line technology (in agricultural tractors) over the years to come.

According to Belarus, the 3023’s electro-mechanical transmission has two ranges – a road mode that stretches from zero to 42kph and a field mode that tops out at 20kph. Like a hydro-mechanical CVT, this stepless system affords the operator “seamless” control over travel speeds – using a lever or a pedal.

There’s also a claim of reduced maintenance requirements; there isn’t a conventional ‘gearbox’ – so the need for oils and filters is lessened.

The entire tractor weighs 12t; the 3023 can be specified with a Detroit Diesel or a Deutz engine.

In other Belarus developments, the manufacturer wheeled out an imposing prototype tractor (pictured below) at last year’s Agritechnica show.

With 466hp under the hood – courtesy of a Caterpillar C13 engine – the tractor on display was, at that point, only compliant with Stage IIIa emissions regulations. To be permitted to be sold in European markets, Belarus will have to source a Stage IV compliant motor.

The transmission is a semi-powershift box, with four shift-under-load ratios in each of four main ranges.

The tractor’s model designation is 4522. It’s a weighty beast; the goliath tips the scales at a portly 16-17t (unballasted). 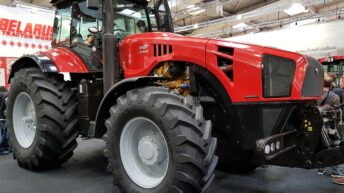 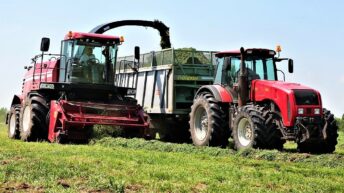 Pics: ‘Unusual’ forage harvester from the ‘east’ struts its stuff