Home » Machinery » Fendt silage gear gets another midlands outing: But where to now?

Fendt silage gear gets another midlands outing: But where to now? 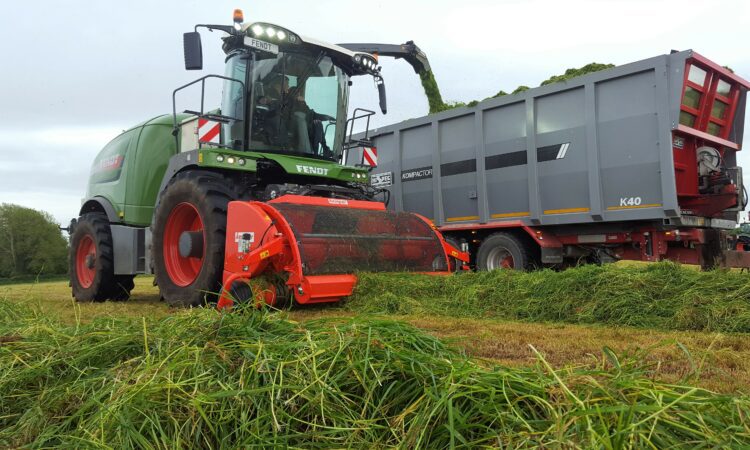 Fendt, in conjunction with its Offaly-based dealer Atkins (Birr depot), played host to a silage-themed working demonstration yesterday – in a follow-up to last week’s Grass & Muck event in Gurteen College.

Staged close to Rath (Co. Offaly), visitors had a chance to operate much of the equipment – under the supervision of Aktins’ own staff.

The star of the show was this Katana 65 self-propelled forage harvester (pictured below). It’s photographed here side-filling into a triple-axle Hi-Spec K40 Kompactor which, in turn, is hitched up to a pristine (but far from brand new) Fendt Favorit 824.

The Katana 65 (with 625hp on tap) is the smaller of two foragers offered by Fendt; the more powerful 85 model churns out 850hp.

According to Fendt’s Sean Gorman, the forager at yesterday’s demo is not being shipped out of the country just yet; expect to see it pop up elsewhere on the island. Asked if a retail deal is in the works, he replied: “I can’t confirm or deny anything yet.”

Also present were a number of mowers – derived from Fella-badged machines. This front and rear combination (pictured below) was mounted on a 163hp 516 Vario.

Working behind the mowers was this rake (pictured below). This Fella-designed machine – known as the Former 671 in Fendt parlance – was coupled to a 132hp 313 Vario.

This Tigo PR 50 wagon (pictured below) was also put through its paces yesterday. This is the first such machine (in Fendt rather than its previous Lely colours) in Ireland.

Though not confirmed by Atkins or the manufacturer, it is estimated that this 50m³ (nominal capacity) machine will sell for somewhere up to €80,000 plus VAT.

This round baler (pictured below) comes from the Lely/Welger stable. It’s a product that Fendt is keen to show off. The company argues that, while it’s new to Fendt, the underlying machine is “already proven in Irish conditions”.

Though a silage-themed event, also on show was this trailed sprayer (pictured below) – namely a Rogator 344. Its tank can hold 4,400L; available boom widths are from 24m to 30m. It’s one of four models in the company’s trailed sprayer line-up.

While the day was very much about green-liveried equipment, this giant Kverneland (triple-unit) mower (pictured below) did manage to find its way in – presumably because Fendt doesn’t yet have a direct competitor for a machine of this exact size and specification. 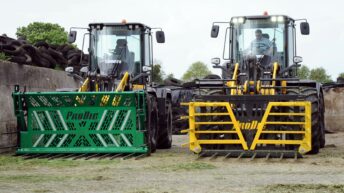 Grass & Muck: Here’s all the bits you may have missed…