Firefighters have said a blaze which destroyed an estimated 100t of straw and machinery in Cambridgeshire was started deliberately.

It took five sets of crews working through the night to put out the flames.

The call first came in on Tuesday (May 21) at 9:50pm that an agricultural building had caught fire on Stocking Drove, Chatteris.

Crews arrived to find a large farm building containing machinery and what crews estimated to be around 100t of straw burning. 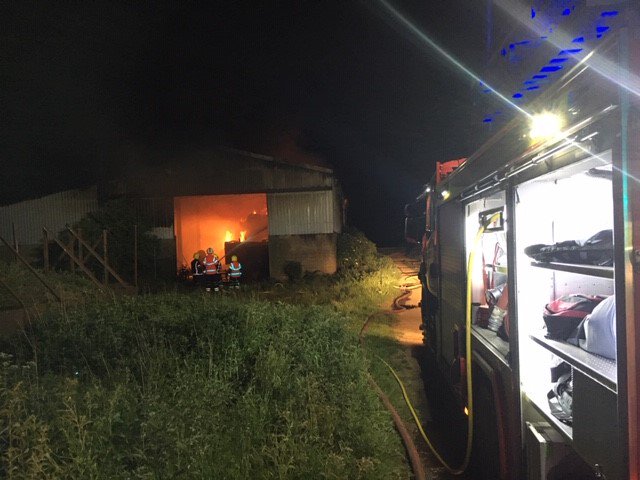 Using two hose reels and two jets, they extinguished the fire before returning to their stations by 7:30am on Wednesday (22).

The cause of the fire was determined to be deliberate. Anyone with information is asked to contact police on '101' or call Crimestoppers on: 0800-555-111.

It follows a significant number of deliberate fires across the county during April has sparked concern for fire officers.

Cambridgeshire Fire and Rescue Service’s firefighters responded to 91 fires that were started deliberately last month - an increase of 34 from the previous month and 48 more than last year.

Station Commander Pete Jones, the service’s arson liaison officer, said: “This month has seen a very concerning increase in arson-related activity around the county. Seeing the number of fires happening, particularly in areas like Huntingdonshire and East Cambridgeshire, is certainly very alarming.

“Arson is a serious crime and can have severe consequences for those that start a fire - no matter how big or how small it is.

"Not only this, but any fire presents significant risks for anyone around the area if it gets out of hand, as well as for the fire crews sent to tackle them.

“We work closely with the police and other partner agencies to try and prevent these types of incidents. However it is clear there is more work to do, and we need help from residents across the county. Reporting a fire, whether deliberate or not, is important so our crews can respond quickly and stop it spreading.

Parents can also help, particularly during school holidays, by speaking with their children and ensuring they know the risks and dangers of fire.

"Making sure that lighters and matches are kept well out of reach of children, as well as making sure they stay clear of disused or derelict buildings, can also make a big difference.

“With the warm weather fast approaching, it’s really important that we work together with our communities to prevent deliberate fires happening in our county and reporting them if we see any suspicious activity in the area.”