With Enzootic Abortion of Ewes (EAE) responsible for more than a third of abortion cases in sheep every year, a new campaign has been launched to encourage farmers to vaccinate in advance of tupping to prevent both unnecessary lamb losses and inappropriate use of antibiotics.

Independent sheep veterinary consultant Dr. Fiona Lovatt, who leads the cross-industry Sheep Antibiotic Guardian Group, says farmers often don’t realise that EAE is responsible for over 35% of all abortion diagnoses, the largest cause by far.

Despite this, only one million of the 3.5 million replacement ewes in the national flock each year are vaccinated against EAE.

“Any sheep farmer that either buys in ewes for replacements or has close neighbours that also lamb sheep, risks bringing enzootic abortion into their flock,” explained Dr. Lovatt.

Once the disease infects an unvaccinated flock, some ewes are ‘programmed’ to abort at their next lambing, leaving no choice but to put remedial measures in place – usually including both vaccination and antibiotic treatment.

This means EAE is a disease that, once in a flock, carries high costs both financially and emotionally in terms of lamb losses and farmer stress.

“It is important that flocks receive appropriate vaccination at least four weeks before ewes go to the ram and avoid the inappropriate use of antibiotics closer to lambing,” added Dr. Lovatt.

“There are areas of the country where sheep farmers have routinely used whole flock blanket antibiotic treatment close to lambing to prevent abortion. There is absolutely no need for this; it is neither appropriate for disease control, nor cost-effective.

“Misuse of antibiotics contributes to the development of antimicrobial resistance and ultimately this will be detrimental to flock health as it becomes harder and harder to treat common diseases.”

Dr. Lovatt points out that a single dose of EAE vaccine costs about £2.40 and is an investment that effectively lasts the ewe for her lifetime in the flock, protecting against losses.

In contrast, abortion or stillbirth – which accounts for around a quarter of all lamb losses each year – costs over £25 for every single lost lamb.

“Every injection of antibiotics also costs an additional £1,” said Dr. Lovatt. “But is just a ‘sticking plaster’ with short-lasting effectiveness in terms of disease control but long-lasting damage in terms of mounting resistance.”

Worcestershire sheep farmer Sam Jones has a commercial flock of over 1,000 ewes, and watches his costs very closely.

“I used to routinely jab all my ewes with antibiotic just before lambing because I didn’t know any better. However, not injecting last year saved us £1,200.

Instead, I now vaccinate my 230 replacement ewe lambs each year. This way, I will have a fully protected flock in time and I’ve maximised the value of the vaccine over the life of each ewe – money well spent.

“For any flock at risk, it pays to vaccinate replacement ewes before they go to the ram for the first time." 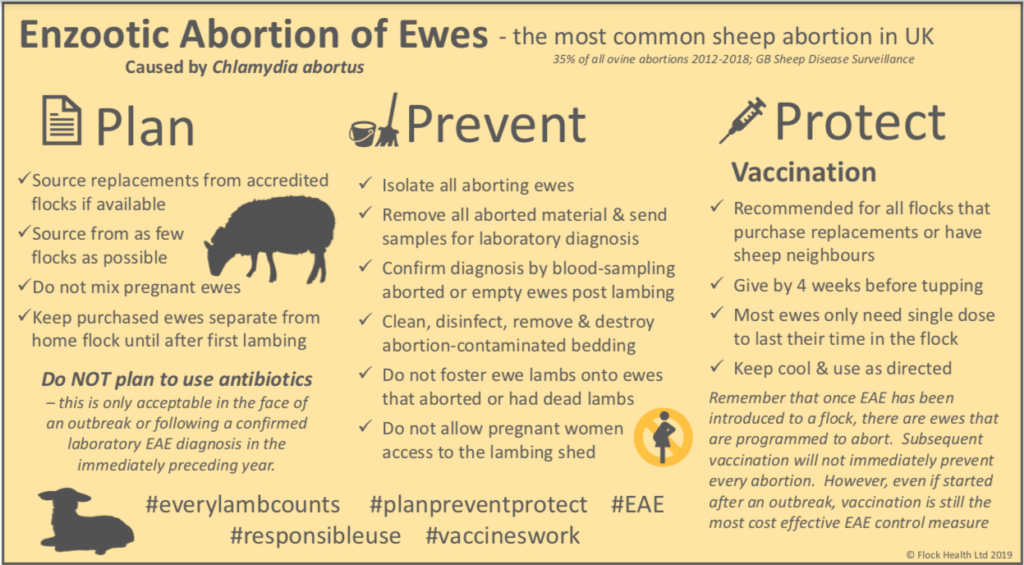 A simple graphic has been developed to help raise awareness of how best to avoid enzootic abortion and to encourage sheep farmers to make considered decisions ahead of tupping this year.

Dr. Lovatt has also created a detailed webinar to explain enzootic abortion and the costs associated with it, and says time is of the essence.

“Recognising the issue now means sheep farmers still have time to plan ahead, prevent disease spread and protect their flock by getting them vaccinated before the critical cut-off point four weeks before tupping," she said.