Protesting French farmers brought the Tour de France to a temporary standstill earlier today, with bales of hay reportedly being thrown onto the cycling route - prompting a swift reaction from local police.

Police purportedly used tear gas or pepper spray to disperse the protesters - accidentally spraying some of the competing cyclists in the process.

The official Tour de France Twitter page confirmed the protest and resulting delay of about 10 minutes, tweeting: "The peloton has been slowed down by protesters. The race is temporarily neutralized."

According to news giant Reuters, the protest staged by local farmers brought stage 16 of the Tour de France to a stop, with bales of hay flung onto the road on the route from Carcassonne to Bagneres-de-Luchon.

The publication adds that, according to competing cycling teams and French media, police used tear gas to disperse the protesters - but it ended up blowing in the face of the riders, which led to the race being stopped at the 187 km-to-go point.

Tour de France stage 16 has been stopped following a farmers protest! Looks like pepper spray used by French police on farmers protesting at #TDF2018 has affected the peloton. pic.twitter.com/5y1GOoGcpR 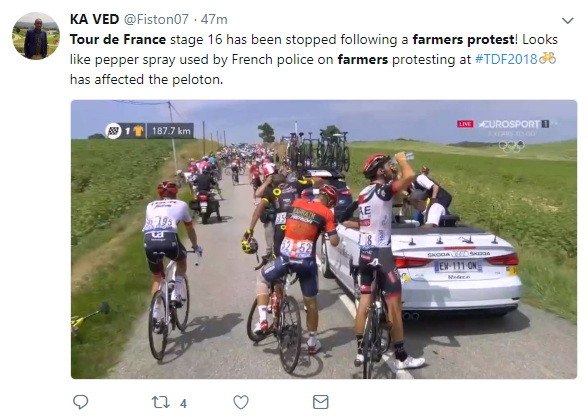 The race continued after the brief hiatus, Reuters says.

According to sporting publication AP Sports, former winner Chris Froome was among the cyclists treated for the gas or spray used:

"Four-time champion Chris Froome is among several riders who have had their eyes treated for tear gas or pepper spray sprayed on the peloton when a farmer's protest interrupted the 16th stage of the Tour de France."