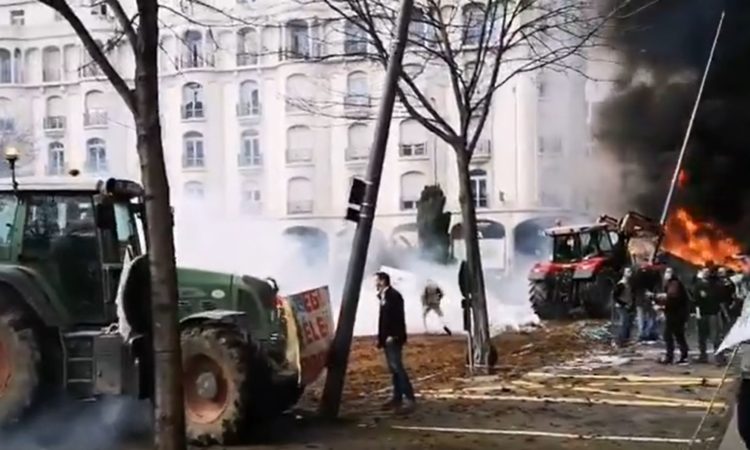 As many as 2,000 French farmers have taken to the streets of Clermont Ferrand in protest over new legislation to tax the use of nitrogen fertiliser.

The country’s new Climate and Resilience Bill proposes what farmers are describing as a “punitive and unfair” nitrogen royalty.

A study carried out last year for France’s Ministry of Agriculture showed that organic fertilisers could not meet all of the industry’s needs, even just to support a nitrogen-free strategy in France.

Why are farmers protesting?

The protest was coordinated by the FNSEA, France’s largest farmers’ union, with Jeunes Agriculteurs (Young Farmers) and other agricultural professional bodies also opposing the new legislation, warning it “stigmatised” the use of chemical fertilisers without providing alternatives.

The union said it ignored changes that were already occurring in farmers’ practices and said the measures would drastically reduce farm incomes without providing a “real response” to current climate issues.

A spokesperson for FNSEA said: “The arguments put forward by the FNSEA and JA to request the deletion of this article did not resonate with the parliamentarians of the Special Commission. The Bill paves the way to reduce the ‘overuse’ of mineral fertilisers in France.

Can we really talk of the ‘overfertilization’ of crops when we know that nitrogen deliveries have decreased by 20% since 1990 while yields in cereals increased by 30% at the same time?

“Indeed, the work carried out by both public and private research bodies have significantly improved fertilisation management over the past few decades (through soil assessment, decision-making tools, and providing information on choice selection, etc.).”

Efforts to reduce fertiliser use

At the same time, low emission slurry spreading technology has improved, making it possible to reduce the share of mineral fertilisers as well as nitrogen surpluses.

“These efforts have been made across all agricultural sectors: For example, in dairy farms in the west, the nitrogen balance decreased by 35% between 1995 and 2010 and the use of mineral fertilizers, by 50%,” the spokesperson added.

“The Bill, by allowing for the implementation of this tax, sweeps away all the efforts made by the agricultural profession.

It also risks distorting differences in the competitive market already existing between French farmers and those in other countries. For example, in 2020, an American farmer pays 65c/kg N for urea against 92c/kg for a French farmer.

“This distortion has also been accentuated at a European level: From 2014 to 2020, around 20 member states, including northern European countries, have introduced aid schemes to support agricultural investments aimed at reducing emissions – as a result, some farmers have benefited from subsidies covering up to 90% of the investments made.”