Grain price: In the green

Grain markets were, for the most part, in the green this week. LIFFE, MATIF and Chicago Board of Trade (CBOT) wheat all finished up significantly on close of Monday, March 16.

The Covid-19 pandemic was impacting on grain prices as global markets react daily to the current crisis. Declines in crude oil prices and fertiliser prices are also impacting on agriculture.

A more detailed look at grain prices is available below.

To give some example of what is happening in the markets, the value of the UK pound against the US dollar reached its lowest levels since 1985 this week according to reports from the Agriculture and Horticulture Development Board (AHDB). This allowed LIFFE wheat to increase.

On Thursday morning, UK wheat for May reached £160/t - the highest price this season.

Coceral, the European association representing the trade in cereals, feedstuffs and other products released its crop forecast for March on Tuesday, March 17.

Coceral is forecasting the EU's 2020 barley production at 61.5 million tonnes. That's an increase from the first forecast which was 60.8 million tonnes, but is down from 62.2 million tonnes last year.

The increase is also thought to be related to the decrease in winter wheat area in the UK, which is expected to be replaced somewhat by an increase in spring barley area.

Corn is expected to benefit from the decrease in winter cereal area in the EU. Coceral forecast corn production up to 65.5 million tonnes. If it does reach this level that's an increase of 4.5 million tonnes on 2019 when the figure stood at 61 million tonnes.

Rapeseed production was revised down in the report from 17.1 million tonnes in January to 17 million tonnes in March. Coceral stated that this was "as a further downward revision in the UK’s acreage has not been offset by a higher acreage in France".

Looking ahead to harvest prices and on Friday afternoon, March 20, MATIF wheat for September was at €183/t.

Spot prices for barley were also on the increase. On Friday afternoon, feed barley on the continent (delivered Rouen) was priced at €162/t. 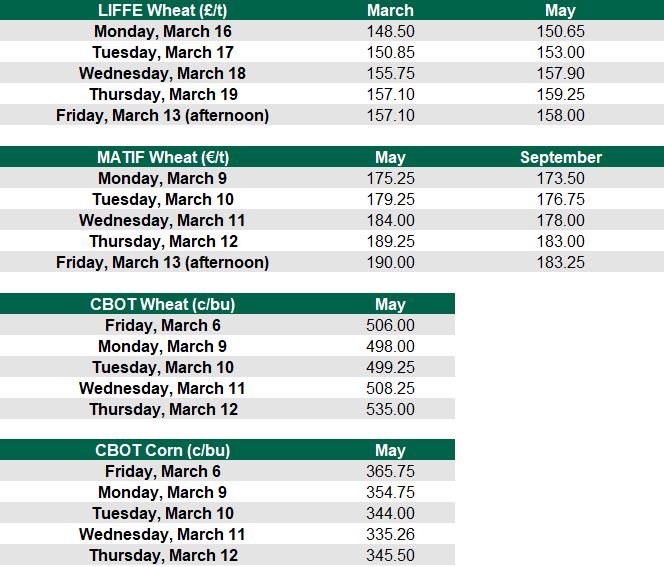