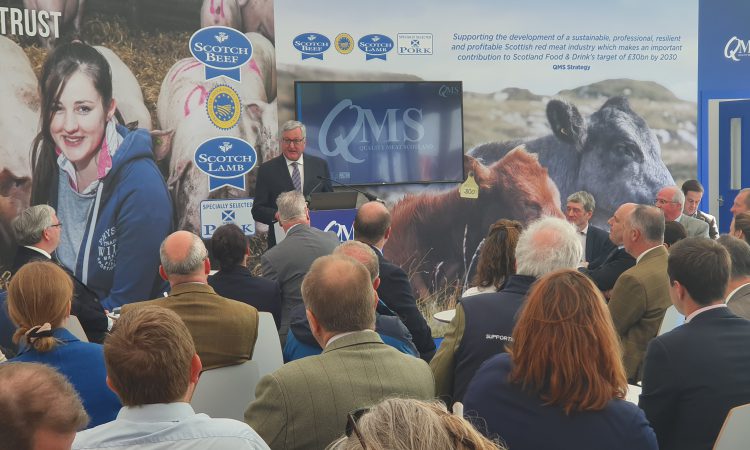 The Scottish Rural Affairs Minister has called for the UK Government to demand the EU matches funding given to help Irish beef producers through Brexit.

The money is to mitigate against the direct and indirect impact of Brexit and reductions in price since October.

Speaking this morning at a breakfast for producers at the Highland Show, Cabinet Secretary for Rural Affairs Fergus Ewing said: “Over these years, I have always had an affinity with farmers and crofters with the work that they do. I am very proud of what you do.”

Ewing said it would take detailed advice and analysis to boost the industry and raised concern over the decline in beef cattle numbers in Scotland.

Speaking about recent export announcements to new markets, he said: “We do need to be able to fulfil orders. One thing that really troubles me has been the steady, but sadly inexorable decline in the numbers of our beef cattle herd in Scotland.

It’s one that we need to tackle together – there is no simple solution. It is not about coupled support – although that will play a key part.

“The recent decline in beef prices – now down to a three-year low – isn’t helping at all and at the same time, I am well aware from discussions with farmers that rising costs are a very serious problem at the moment.

“The situation facing the beef sector at the moment is pretty serious and I am well aware of those problems.

“Now they have to contend with a new development – namely, that watching over the water in Ireland, the Irish industry is getting €50 million off its Government fighting for that money from the EU.

‘Where is Britain’s compensation scheme?’

“So what I want to ask is, ‘Where is Britain’s compensation scheme?’ The Irish have gone to the European Commission and with the help of the Commissioner, they have secured a compensation package of €50 million.

“Ok, they have to match it and there are strings attached which may not be that congenial to the farmers in Ireland. But be that as it may, the Irish Government has fought for this compensation package.

I have already written to Michael Gove to say that in Britain, we should get together and amass a case for a compensation package – and one where we can decide where the money is best deployed to ensure that the actual farmers benefit therefrom.

“So this is a serious piece of work – it’s underway and I will be pressing Michael Gove on Monday to ask him why the UK Government is not doing what Ireland has done when it is manifestly clear there is a real problem facing beef farmers at the moment.”